Sometime between yesterday morning and last night, Banksy's Twin Towers piece in Brooklyn Heights was buffed, which may have been the work of the city (according to a certain tabloid, they've been "hunting" the elusive street artist). The piece didn't last a week, but during its time up in the Fruit Street Sitting Area it was never defaced, and the yellow flower that was stuck in it was never removed. 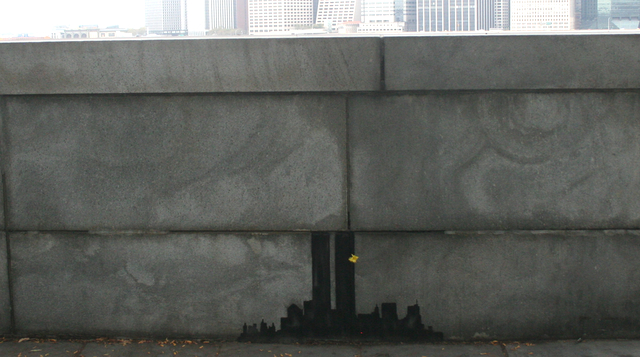 Meanwhile, the Twin Towers piece in TriBeca has been subject to more attention. Since Tuesday it's become something of shrine, with flowers placed next to it, as well as a letter asking haters not to touch it. Eventually some plexiglass was placed over it in an effort to preserve it, but last night someone covered it all with black paint:

This is why we can't have nice things, etc...

#banksy
#brooklyn heights
#buffed
#defaced
#tribeca
#twin towers
Do you know the scoop? Comment below or Send us a Tip