Banksy's Reaper Was Too Much Cowbell For Disgruntled NoHo Neighbors

The reaper may not be fearsome, but some local residents found him really freaking annoying. Throughout the weekend, a creepy/funny Banksy installation drew crowds of onlookers to the corner of Elizabeth and Houston, where a giant grim reaper puppet rode around in a bumper car from sunset to midnight. An accordion player was periodically interrupted by a blast of Blue Oyster Cult's "Don't Fear the Reaper" as flashing disco-lights kicked the piece into high gear. It was all good fun for bemused passers-by, but AT WHAT COST? The neighbors who live nearby say the installation made their little Houston Street domiciles a living hell. 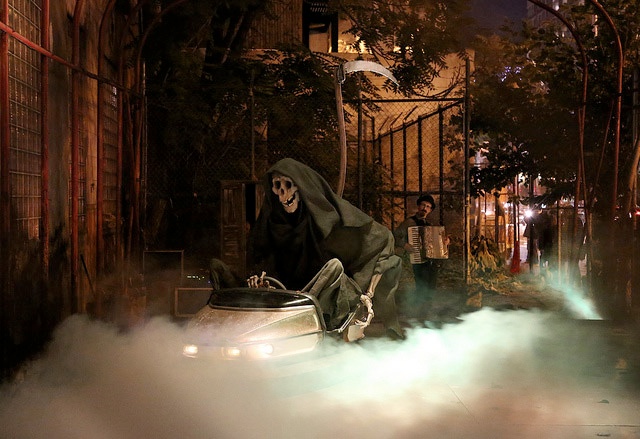 Comedian Julie Klausner was driven to the brink of madness by the reaper: 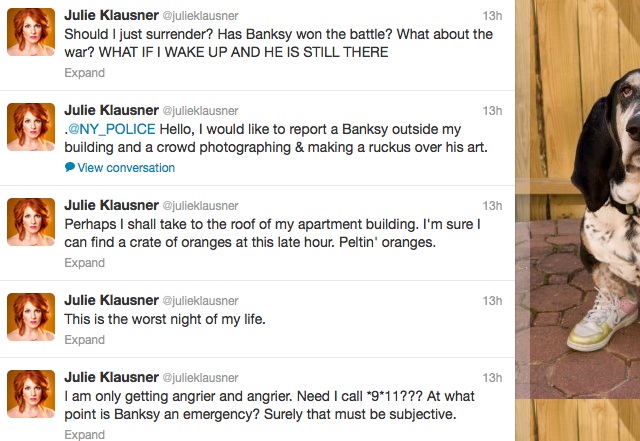 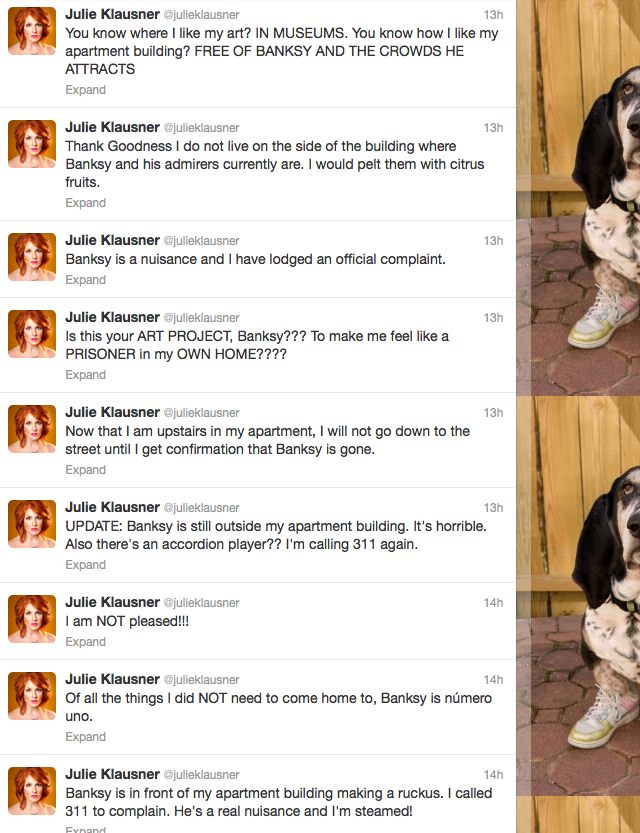 Klauser was not alone in her ordeal. Neighbor Matthew Shoenthal, who lives across the street, sent us this email with the blunt subject field "banksy is an asshole." While acknowledging that "yes, i know, 'the grumpier I am the more assholes I'll meet'," Shoenthal writes:

Since it seems impossible to contact Banksy or anyone associated with him, and since I have no other outlet for my considerable frustration, I thought i might send in a brief counterpart to your endlessly fawning banksy coverage. I live on the second floor of an Elizabeth Street building that's across the street from this weekend's grim reaper piece. It seems to me that an artist so focused on the urban environment and city settings should be a little more aware of how he affects the people who live where he works.

There are countless times and places in new york city where an art installation with loud music is appropriate—a residential street at 11:30 p.m. on Sunday is not one of them. I know everyone else is consumed by Banksy's deeply meaningful commentary on the human condition and the randomness of death, but if you set up outside my bedroom window with a concert amp and blast the hook from "don't fear the reaper" on repeat for three days straight, you're an asshole.

To play reaper's advocate for just a moment, the crossroads of Houston and Elizabeth—or Houston and anything, for that matter—is typically noisy and crowded on a weekend night. Shoenthal counters:

The crowds were much louder than normal, but it's a busy corner in Manhattan and I'm used to street noise. The music was unbearable even with the windows closed—so i just stayed away from my apartment all weekend after 6 p.m., but came home around 10 last night. I called 311, they didn't seem to grasp the nature of the complaint, and transferred me to 911 (even though I told them not to) because I said "yes" when they asked if crowds were spilling into the street.

The 911 operator told me to call 311 since i was trying to register a noise complaint. City phone worker incompetence notwithstanding, I would like to emphasize again that Banksy is the asshole here. I spoke to a few people inside the fence who looked like they worked there and they just told me "We'll shut it off at midnight." There were a few guys on the sidewalk who looked like security, and they were really obnoxious and aggressive—someone else from my building was out there on the phone with the police and the security guy was standing on a bucket telling the guy from my building that he was going to "Knock all the teeth out of his head."

Well, that is kind of a dick move.

We reached out to Banksy's publicist to ask about the security, and we'll update if we hear back.

Banksy spokesperson Jo Brooks says allegations about threatening security guards are "completely false." Regarding the other disgruntled neighbor, Shoenthal may be referring to this man in loafers, whom a tipster tells us was on the phone last night trying to get the installation shut down: 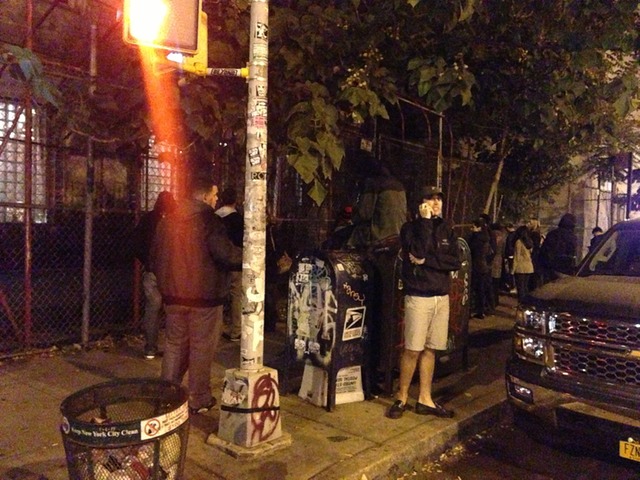 The reaper may not be fearsome, but some local residents found him really fucking annoying.

"Moments before I took this photo he had been getting into in exchange with one of the private 'security guards' hired to watch over the corner, the guard was getting verbally aggressive and this guy just continued to stay on the phone waiting to speak to an official," says our source. "When he finally started talking to someone I overheard him say something about the noise level of the piece, since he apparently lived across the street from the lot that formerly housed Billy's Antiques. Having lived a block away on the corner of Mott and Houston, I can tell you if the guy is looking for peace and quiet he should move to the UES or Murray Hill or wherever these d-bags normally live."

And finally, Gothamist's lead Banksy hunter, Nic Garcia, tells us that on Saturday night "a guy walked by and screamed 'HEY ASSHOLES!!' And once everyone turned and looked, he started screaming about how people are trying to sleep and kids are crying and to be quiet. But he was making all this noise and people told him to be quiet and go home and that made him saaaaaad. He started yelling fuck you to everybody and then walked on."

The good news for local residents is that the installation is now over, and the location has been returned to a soulless and silent empty lot with no art disrupting the natural order of things in their idyllic NoHo utopia.

#banksy
#blue oyster cult
#noho
#noise
#whambulance
#original
Do you know the scoop? Comment below or Send us a Tip