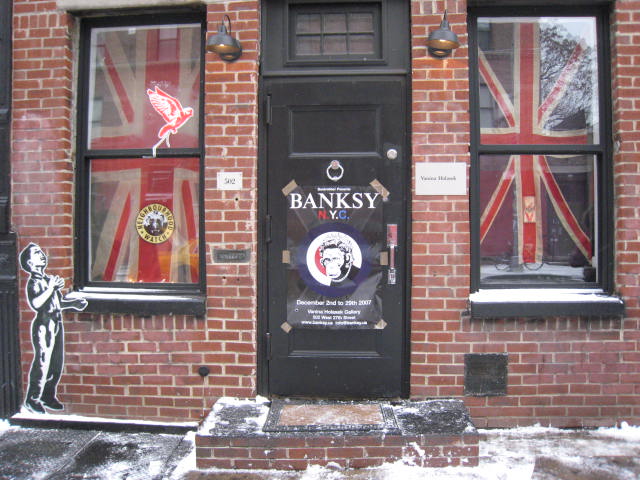 ArtCal calls him, "the most controversial and downright interesting graffiti artist at large in the UK today" and whether or not you agree -- Banksy is decorating our streets, galleries...and even Brangelina's household walls.

In New York he has pranked his way into the Met, MoMA, the Brooklyn Museum and the American Museum of Natural History. Recently it was announced that his images would be used to sell luxury condos in Williamsburg...and just yesterday he opened his first official show in New York, at the Vanina Holasek Gallery in Chelsea. The exhibit includes 62 paintings and prints from both private collections and commercial galleries.

Many are rightfully labeling the (sort of) anonymous artist as the next Warhol. In Chelsea, you'll see his Kate Moss print which parodies Warhol's famous Marilyn print. He's also pointed his spraycan and wheatpasted brush towards a soup can from time to time. And mixing his pranks with pop, he once smuggled 500 alternative copies of Paris Hilton's cd into stores.

If you head to the gallery (the show closes December 29th), beware -- it's a little cramped in there. And if you intend to purchase (it's a selling exhibition), hit the ATM beforehand -- pieces are going for six digits.