On Monday night, a group of activists put up an imitation Banksy on a scaffolding wall where SUV driver Alexian Lien was attacked by a group of enraged motorcyclists after a collision on the Henry Hudson Parkway that left one biker paralyzed. The piece, which they dubbed a "Cranksy," riffed on Banky's famous "Protester," and depicted a motorcyclist about to smash his helmet into an SUV window as the NYPD stood idly by. Less than 24 hours later and it's gone, Banksy, gone.

Keegan Stephan, one of the organizers of the group, Right of Way, says they called the scaffolding company and "they said they did not remove them, and that they actually need to replace them asap because without the wood there, they are in violation of the 'shed laws.' " A receptionist at the company, Everest, also told us this morning that the company "had no idea who removed the art piece." 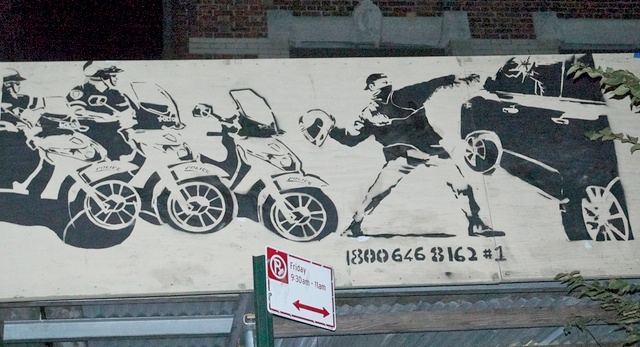 So that's that. Not even an obviously fake Banksy (the stenciling was all wrong) lasts long in this Banksy-crazed town. Yesterday a man was selling T-Shirts in SoHo for $20 each that simply read "I Am Banksy," while uptown artists continue to do brisk business selling Banksy knock-offs that are clearly labeled as fake. And later today we'll be auctioning off the sweaty shirt that NY1's Roger Clark wore backward when he was interviewing Jake Dobkin about Banksy. (All proceeds go to the Roger Clark Air Guitar Foundation For Air-Deprived Youth.)