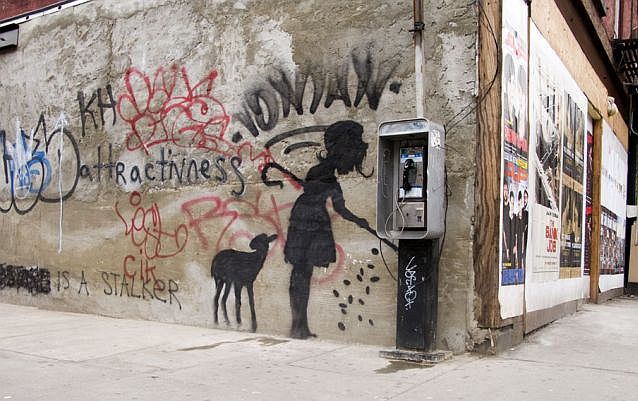 Banksy, the cheeky street artist/prankster turned multimillionaire art star, was in town last week, presumably for the Damien Hirst-coordinated auction at Sotheby’s to benefit the (Project) RED campaign, which works with corporations like the Gap to raise money for the treatment of A.I.D.S. patients in Africa. The $48 million raised at the event – through the sale of works by Hirst, Banksy, Jeff Koons, Jasper Johns, Willem de Kooning and others – will be distributed by the Global Fund.

One of the highest selling works, for $1.87 million, was Banksy’s “Keep it Spotless”, a painting of a maid cleaning under a Damien Hirst dot painting. While in the States, the secretive Banksy had some fun in L.A., where the caveman seen below was spotted, and in New York, where the “Bo Peep” above appeared next to a pay phone. There are supposedly a couple more out there, and The World's Best Ever is having a contest that awards a “tote bag full of randomness” to the first person to locate them. 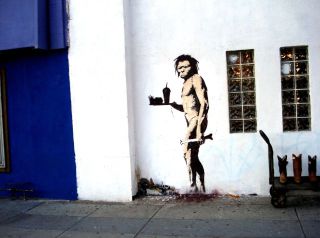 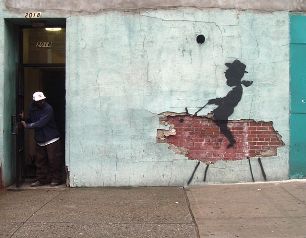 The bronco boy above right may be somewhere in the Bronx. And a Pooh Bear swallowing a gold graffiti tag instead of honey may be in Chelsea, while rumors of a third in the East Village are circulating. Let us know if you’ve seen any, and tag your Flickr photos “Gothamist.”