Back In The Day, Live Monkeys And Penguins Rode The Subway

Everyone is still so excited about the shark that rode the subway this week. But that shark was dead. A lifeless, empty vessel that some bro stuck props on in some har har Weekend At Bernie's fashion. But back in the day, New Yorkers found LIVE animals on the subway. We're not talking your run of the mill urban creatures like rats and pigeons, we're talking monkeys and penguins! Yeah, your dead shark doesn't seem so special now, does it. 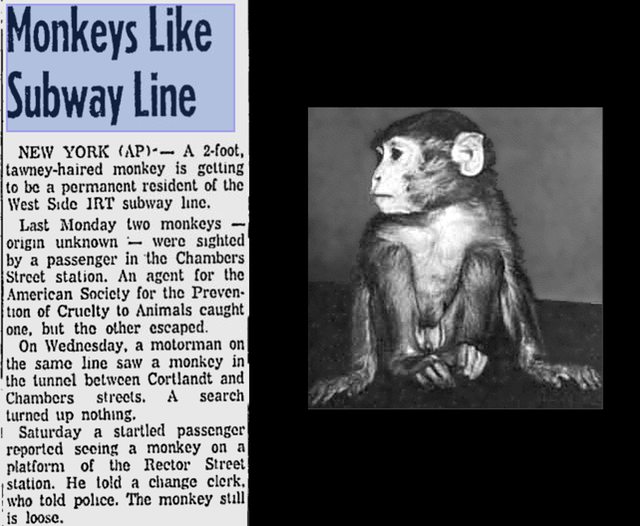 Back in July 1960, more than one rhesus monkey was spotted on the 1 train. At the time, the AP reported, “Last Monday two monkeys—origin unknown—were sighted by a passenger in the Chambers Street Station." The NY Times later reported on another "traveling monkey" who was spotted “standing on the northbound platform at the Rector Street Station, as if waiting for the train." The monkeys were eventually captured by the ASPCA, but as we've noted before, who knows how many escaped the grips of humans and are still living beneath us. 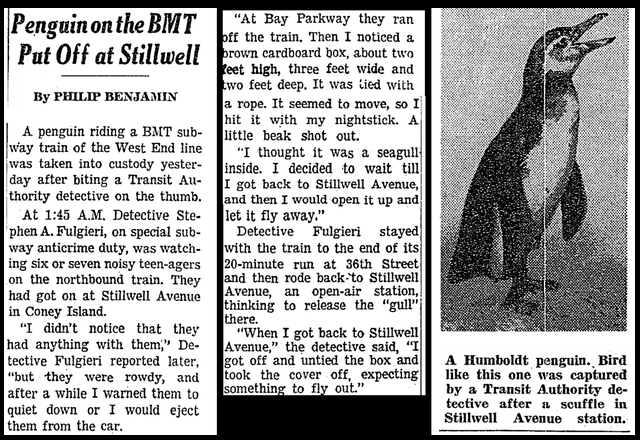 A few years later, in May of 1965, the NY Times reported that a penguin was spotted riding "a BMT subway train of the West End line," and was taken into custody after biting a Transit Authority detective on the thumb. This story began with a bunch of no-good teenagers, naturally. The book When Did the Statue of Liberty Turn Green? & 101 Other Questions About New York City revisited the caper, writing:

"On May 9th, 1965, a Transit Authority detective watched a group of teenagers board a subway car at Stillwell Avenue in Coney Island. They got off the train at Bay Parkway, leaving behind a cardboard box. When the detective saw the box move, he hit it with his nightstick—and out popped a beak. Thinking that the teens had captured a seagull, the officer, box in hand, switched trains, planning to release the bird at Stillwell Avenue's open-air station. Upon arrival, the detective opened the box and was promptly bitten on the thumb. Angry, he kicked the box, which tipped over, freeing his attacker. An onlooker identified the bird as a penguin."

The penguin was captured again, and the Coney Island Aquarium was contacted. They discovered they were indeed missing a penguin, and the the little guy was returned.

#animals
#flashback
#history
#monkey
#penguin
#subway
#original
Do you know the scoop? Comment below or Send us a Tip