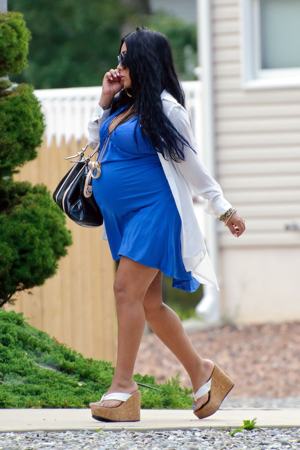 Perhaps this is not the apocalyptic event that the Mayans predicted: Reality TV celebrity Nicole "Snooki" Polizzi and her fiance Jionni LaValle welcomed a baby boy early this morning at a (New) Jersey hospital. Her rep told MTV News, "The world just got another Guido!!! Lorenzo Dominic LaValle has entered the world weighing 6lbs, 5oz. Nicole, Jionni & Enzo are doing great!"

Last night, her reps had told People, "Yes, Nicole has gone into labor. While we understand she has fans everywhere - hospitals now included - we ask that her privacy be respected moving forward. We'll all get to meet her Italian Stallion newborn soon enough."

MTV issued a statement on their future new calf, "We couldn't be happier for Nicole and Jionni on the healthy delivery of their baby boy! We look forward to Lorenzo's first trip to the Jersey Shore and can't wait to see his first animal print onesie."

Earlier this year, Snooki broke the pregnancy news to US Weekly, referring to the pregnancy as a "happy accident." Also: She had been drinking and partying heavily right before she found out she was pregnant, thus, after taking a pregnancy test, her reaction was, "Fuck, I've been drinking!' I was worried. It was New Year's Eve and we were in Vegas, so I did go crazy."

Baby Lorenzo has the distinction of being one of the few children who will get to see Youtube footage of his mother being punched by a Queens gym teacher because it was filmed for MTV—take THAT, Honey Boo Boo!

It's unclear if Mayor Bloomberg will weigh in on congratulating his pal.

I am SO IN LOVE with my son Lorenzo Dominic ! I had my little man last night, healthy at 6lbs! HE'S MY WORLD! ❤

Update: Another Tweet, and this time, it's a little disturbing!

Being a mom is an amazing feeling!!! I love my little man to death! Jionni is such a cute dad. @jlavalle