As a member of the Peace Corps in 2005, Michael Levy found himself in China. Not the modern metropolitan China that we often see on television or in the news, but in Guiyang in the country's interior. It's there that Levy has his encounters with squat toilets, interesting food, teaches English and becomes the "Friendship Jew". He tells tales of his time in China in his new book, Kosher Chinese: Living, Teaching, and Eating with China's Other Billion. If you want a sampling of the book, Michael has a reading and signing tonight at 7pm at Book Court (163 Court Street in Brooklyn).

In your book, Kosher Chinese, you describe your two-year period as a Peace Corps volunteer teaching English in China. Why did you decide to join the Peace Corps? I was living on the Upper West Side on 9/11 and, like all New Yorkers, I felt scared, helpless, confused, angry. . . And I wanted to do something. I'm not the military type—I get queasy watching The Walking Dead—so there was no chance I’d join the Marine Corps. But I had heard of this thing called the Peace Corps. The more I looked into it, the more I felt like it would be a way for me to feel a sense of control, a sense of contribution (however small). So I guess I joined for the most basic reason: to do service for my country. It’s hipster patriotism.

Kosher Chinese is, in a lot of ways, a celebration of the Peace Corps. It is an absolutely remarkable part of our foreign policy, and something I think all Americans—particularly progressives—should be proud
of. Peace Corps goes only where invited and trains its volunteers to be good guests. It’s a very humble organization, the exact opposite of what many foreigners expect from Americans. Yet we spend more each year on military marching bands than on the entire Peace Corps budget. 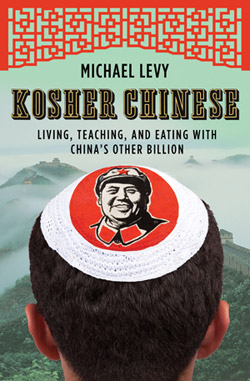 Did you have any expectations on where you might be going? What was your first reaction when you learned that your destination was China? If David Bowie’s character from Labyrinth made sweet sweet love to Franz Kafka, their baby would be the Peace Corps application process. It’s tough to navigate. At one point, I was told Romania was my destination. Then maybe Vanuatu. Finally, China. My reaction for the first two was, “get me a map!” I was glad to get China, but I would happily have gone wherever my skills were most needed. That turned out to be Guizhou Province, a part of China that Americans rarely visit, and that no one has written about (until now!).

How did your expectations of China differ from the realities of Guizhou, the province that you were assigned to? And how does Guizhou differ from the China that most Americans see in the news? I started blogging while in China, and the reaction of my readers was always the same: where the hell are you? Everyone knew I was in China, but the stories I would tell, the observations I made, the people I met, were nothing like the news we get from the mainstream American media. Thomas Friedman would crap his pants if he visited Guizhou. It is simply not the China we're used to.

Beijing, Shanghai, Hong Kong, those places have a huge story to tell, the story of a booming economy and a growing world power. It's the story the Times and the Wall Street Journal are getting right. But there are a billion Chinese who have no access to that world, who are literally forbidden from entering that part of the country. China does not allow legal internal migration. So to really know what average Chinese are thinking, we need more news from beyond the coast. We need to know why the other billion love Lebron, but hate Kobe. We need to know why Celine Dion is their favorite singer. We need to know what they think of Barack Obama. We need to know how it can be that at the center of Guiyang (the city I lived in), there is a Mao statue right next to the entrance to the city's Wal-Mart.

Your ethnicity seemed to play a big part of your experience in China and you were eventually nicknamed the "Friendship Jew." How big a role did Judaism play while you were there and how did the nickname come about? I was confronted every day with issues of identity. What does in mean to be an American? What did my hosts think it meant to be a Communist? What does it mean to be a Jewish Peace Corps Volunteer in rural China?

You mention that you were a vegetarian before leaving the United States — did you have any thoughts of possibly staying a vegetarian while in China? Or even thoughts of being Kosher observant? When I left for China, I was a strict vegetarian and totally Kosher. I hadn't touched meat in seven years. But I wanted to be a good guest. I wanted to live up to the Peace Corps ideal of immersion. I learned the language, I got a stipend of 100 dollars a month (the local average), I lived in the same apartment building all the other teachers lived in. . . But this wasn't enough. I also ate whatever was served, no matter how wildly un-Kosher it was (from pig to insect and beyond), and drank like I was at a two year long frat party. Eating and drinking were, to put it simply, the front doors into Guizhou culture.

We all have experiences where, for example, we go to someone's house for dinner and don't like their politics, or don't eat what they've cooked, or don't like some comment they make. When should we bite our tongues, and when should we say, “actually, I think meat is murder, so I can't eat what you've graciously made for me.” In China, it felt like that scene from Annie Hall where Woody Allen's character imagines himself sitting at dinner in a Hasidic outfit as the WASPs around him joke about playing polo.

Speaking of food, what's the strangest thing you ate while there? Was it also the worst thing you ate? The food was absolutely delicious. Including the dog.

I thought one of the funniest sections of Kosher Chinese was when you were running through some of the names that your students had. Can you tell our readers what some of them were and how your students ended up with such strange names? And did you actually address your students by those names? First, I should say that when I took Spanish in High School, I insisted that my teachers call me El Guapo. I, of course, knew what it meant and was just being a pain in the ass. But for my students—none of whom had ever met a foreigner before—there was a lot of innocence. Thus, I met students who had chosen English names like Brave Fighter, God, and Dink. There were two best friends named Stone and Stone Crusher. There was a kid named Hitler. The names were bizarre, hilarious, and a good indication of just how far off the beaten path I was.

Five years after you started your two-year stint in the Peace Corps, you returned to China to teach English again. This time, you were in Beijing. How did that experience differ from your first experience in Guizhou? I was in another world. I went from Guizhou into a CNN story. Beijing shocked me. I was a total country mouse, and I behaved like one. Beijing locals couldn't believe the accent I had in Chinese (“you sound
like a peasant” they often told me), they couldn't believe how much I spit and squatted, and they certainly couldn't understand why I thought every occasion was good reason to have a shot of rice wine. But those were just my norms in China, the regular ways of life in Guizhou. The President of Guizhou University once told me that the average American view of China is as lopsided as a view of America limited to NYC
and San Francisco. Park Slope and Haight-Ashbury do not tell the whole story. Neither do Beijing and Shanghai.

And on your return to Guizhou, did you notice many changes from your first time there? My students have graduated, and most have started teaching careers of their own. They are off in tiny villages teaching English. The people have grown. The province has not. Things move slowly out there. 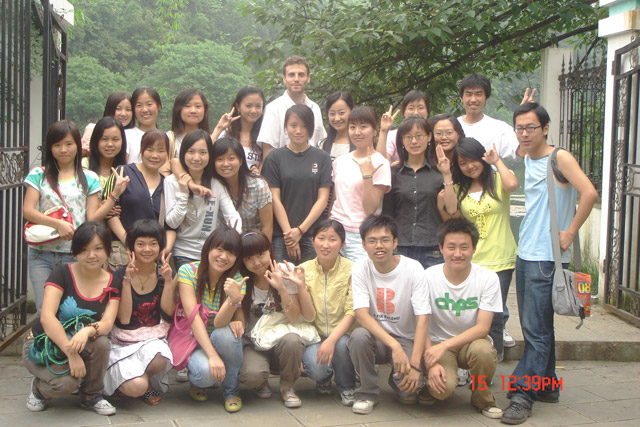 Michael and some of his students.

You're now teaching at a private school in Brooklyn. How does that differ from your teaching experience in China? HA! I think I just swallowed my tongue a little bit. The difference is as stark as imaginable. Like. . . Saint Ann's is like the Luke Skywalker to the Chinese education system Death Star. In Guizhou, I taught 60 kids in a room in tables bolted to the floor. Above me hung pictures of Mao, Lenin, and Marx. Everything was geared towards high stakes testing.

At Saint Ann's, we do not grade. We do not punish. We focus entirely on the joy of the learning process. I don't want to sound like a propaganda campaign, but there is such a relief going from the most rigid, soul crushing system in the world to a school that at its best strives to make creative, happy young people.

Would you consider moving back to China for a longer period? Were there any parts of living there that you enjoyed more than living in the United States? Yes, absolutely! I miss China. I miss the food, I miss my friends, I miss the hospitality and kindness I found every single day. In Guizhou (in most of China, in fact), there is a 2 hour siesta every day. I miss my daily nap.

I do not miss squat toilets.

Finally, now that you're back in the United States, have you returned to being a vegetarian? If not, where do you like to go for your Chinese food here in NYC? I am a vegetarian apostate. There is a saying: "In Guizhou, people eat everything with four legs except the table." I would eat the table.

For Chinese food in NYC, dodge Manhattan. Head to Flushing or Sunset Park. You can't go wrong. But if you do stay in Manhattan, head to 144 E. Broadway. There's no English name to the place, and it's a real dungeon. But they make the best pulled noodles I've ever had in the U.S.

#interview
#Kosher Chinese
#Michael Levy
Do you know the scoop? Send us a Tip