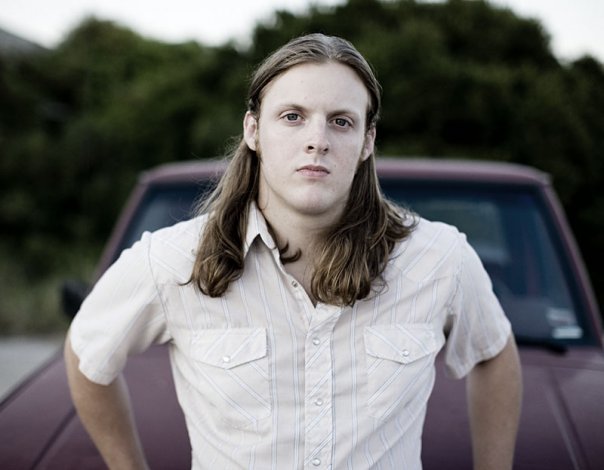 Austin McCutchen is one of the many musicians that make up Neckbeard Telecaster, and like many of them, he's also got his own solo thing going on. For the bluegrass lovers out there especially, check out one of his upcoming local shows (he's at Glasslands this Wednesday). This week he told us a little bit about the music and, you know, avoiding death by a butter knife at the hands of his first New York roommate.
Photo by Noah Kalina.

How did you become involved with Neckbeard Telecaster? What's the dynamic of the band? I met most of the guys in Neckbeard Telecaster at a BBQ a couple summers ago. Seemingly fit considering Neckbeard is all about having a great time...I remember there being lots of red meat. Not sure exactly what you mean by dynamic but if you're talking in reference to what the roles of members within the band are...Well, Mark & Joe write the tunes, and a bunch of us jump on board behind those songs, and away we go. There's a lot of us...sometimes as many as 15.

What/who influences you as a solo artist? As far as personal experience goes, I've moved around a lot...so that definitely influences me as a songwriter. A good portion of my lyrics are about traveling/driving. I like long drives and road trips. Those things are exciting to me and I have had some good and bad experiences on the road...enough worth writing about anyway...sunrise on the salt-lakes after driving all night...that sort of thing.

I have a lot of musical influences and I feel like that's changing all the time. I especially have felt that since moving to New York. There are so many new records that get passed around and lots of talented bands that come in and out as well as local artists. These are all influencing the way I hear music and interpret what is in my head. Some great musicians of the past that hit really close to home and where a lot of my sound stems from? Johnny Cash, Merle Haggard, Tony Rice, The Kinks, The Grateful Dead, CCR, Beatles, Stones, etc. I love 60's music especially, something about that time seems so prolific. It's not like we want to recreate that...or maybe we do, who knows, it's just good.

How long have you been in New York? I moved to New York in the Spring of 07'.

What do you think of the music scene here, as opposed to other cities/towns you've lived in? Awesome, in a lot of ways. People are willing to take chances with their music here. The scene in Brooklyn especially is horribly eclectic. Rock, jazz, afro-beat, noise, new wave, country, bluegrass, old-time, electronic, weird, whatever, it's all here. I find a lot of people complaining about the over-saturation of scene here, and i say "good"...more distinction of who is actually talented.

I moved here from Springfield, Missouri. You know that band the 'Ozark Mountain Daredevils', that everyone pokes fun at on tv shows and comedy acts...they're from there. I know a lot of talented songwriters and bands from Springfield, however I felt there was a serious lack of motivation to create. I moved to New York because I felt like maybe it was a new place I could do that in a serious way.

What's the usual soundtrack at Oslo? Yea yea, I work at a coffee shop called Oslo...no we're not Norwegian. Depends on the day. Lots of rock, country, hip-hop, and bluegrass for me. Sometimes I put on some softer music on rainy days, for the ladies, you know.

Please share your strangest "only in New York" story. Didn't you hear? Giuliani ran off all the crazy people so now nothing strange ever happens anymore, ever.

Which New Yorker do you most admire? Woody Allen.

Given the opportunity, how would you change New York? Can I make rent dirt cheap again? For the love of God.

Under what circumstance have you thought about leaving New York? My first roommate tried to stab me to death with a butter knife one time. Other than that, sometimes you get tired from trying to keep up...or I do anyway. It's a tough life.

Can you please recommend a good weekend hang-out that isn't unbearably mobbed? Union Pool. It's awesome and never crowded.

Best cheap eat in the city. That dumpling spot on Eldridge...Vanessa's or something like that (block & half below Delancey). Cheap and good.