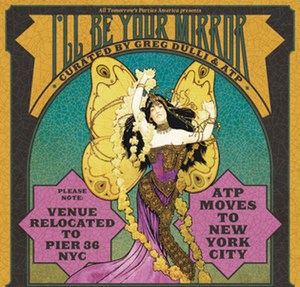 After exploring different spots in New York and New Jersey over the past four years, All Tomorrow’s Parties (ATP) is going to try out a new place for its September fest: Manhattan. The festival's U.S. arm started in the delightfully kitschy Catskills venue Kutsher's Country Club, an old Borscht Belt resort; after three years of that, they moved on to Asbury Park in New Jersey last year. Now organizers have announced they'll be taking over Pier 36 on the East River from September 21st through 23rd.

Organizers Barry Hogan and Deborah Kee Higgins told Ben Sisario at the NY Times, “I think it will be the change ATP needs to make it positive. Even though we love Asbury Park and had a fantastic event there last year, we have found a killer spot in New York that you can walk to from the Lower East Side. It was a tough decision but we had to do what was right for the event to ensure its continued success in the long run.”

#all tomorrow's parties
#ATP
#manhattan
#pier 36
Do you know the scoop? Comment below or Send us a Tip