Are you over the endearing charm of Kutsher’s Country Club in upstate New York? The All Tomorrow's Parties organizers are, so they're moving this year's festival (their 3rd in the States) to... Jersey Shore. Asbury Park, to be exact. Word was sent out via press release last night, but the location was buried by the big names they've already booked: Jeff Mangum (playing his first major show—aka not in a loft—in a decade) and Portishead (who haven't played the East Coast in 13 years). 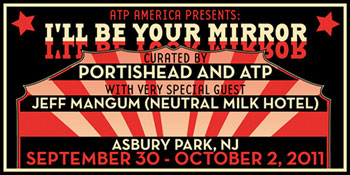 Tickets go on sale this Friday at 9 a.m. (the festival is September 30th to October 2nd), and here's the breakdowns, as explained to us:

The NY Times has more on the location change, and talked to organizers Barry Hogan and Deborah Kee Higgins, who told them, “It was deteriorating into a state where it wasn’t kitschy and funny anymore. It was a little bit beyond the pale.” Capacity and finances were also an issue—total capacity at Kutsher's was 3,000, but the New Jersey venues allow for 5,200 totla (the Convention Hall in Asbury Park holds 3,600 people, and the Paramount 1,600).

Get your tickets here, and read up on how to handle this whole Mangum thing (because, after all, it is a very cool thing, and you will probably cry). You may now commence your 7 months of daydreaming about riding the ferris wheel and playing Skee-Ball with Jeff Mangum, while eating cotton candy and talking about solitude and depression.