In 2006 the rocket topped a frankfurter stand. (Photo via lornagirl's flickr) 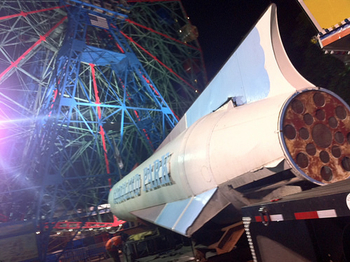 The 71-foot-long, 12,000-pound symbol of Old Coney Island is back—the Astroland Rocket has returned home, after a five year stint in a storage warehouse on Staten Island (that's where the city—who have owned it since Astroland closed in 2008—left it.) The 1960s era rocket ship is "one of the first and only surviving early amusement park simulators," and will soon be joined by the newest: The Thunderbolt roller coaster, opening next week.

As for the rocket, last year the Coney Island History Project proposed a new station for it, and have finally moved it "near our exhibit center in Deno’s Wonder Wheel Park." And it's the park’s owners, Steve and Dennis Vourderis, who "are the proud new caretakers of this classic ride, which they will restore and will be used as an exhibition space.” The exhibit space will focus on Coney Island's fascination with space travel—author of Coney Island: Lost and Found, Charles Denson, notes that "outer space simulators have played a prominent role in Coney’s amusement history. It began when Thompson and Dundy brought ‘A Trip to the Moon’ to Steeplechase Park in 1902 and culminated in 1962, at the height of the space race, with Astroland’s Moon Rocket."

Will Coney's past help its future? Johanna Zaki of the Alliance for Coney Island, told the Brooklyn Paper: "This is a very exciting time for Coney Island. With everyone united, working together to showcase Coney as the One and Only, New York City’s favorite seaside entertainment destination, 2014 is poised to be Coney Island’s best season in modern history."

#astroland
#coney island
#rocket
Do you know the scoop? Comment below or Send us a Tip