Ask a Native New Yorker: Will the South Bronx Ever Gentrify?

This week's question comes from the Boogie Down.

I was born and raised in the Mott Haven section of the South Bronx. And while I notice some small changes to the neighborhood and neighboring Melrose, I haven't seen the dramatic change that has happened in areas such as neighboring Harlem and a bit of East Harlem.

Mott Haven has probably the best convenient access to Manhattan via the 2,4,5 and 6 trains yet it doesn't have the draw like Williamsburg, or LIC had. I want to know why is it that the South Bronx hasn't been gentrified and other neighborhoods have? Is the Bronx really a borough for the slums of the city? Thanks.

The short answer for why the South Bronx hasn't dramatically gentrified, despite the last 30 years of economic growth in the city, is racism. The long answer is racism and bad urban planning.

There are two types of racism at play here. The first is that the last couple of waves of gentrifiers in New York were mainly white. And most white people, especially in the '60s, '70s, and '80s, were scared of black neighborhoods. This was true whether they were artists, gays, whatever. Sure, they'd live in a cold-water, rat infested squat in L.E.S., or a half-burnt out Brownstone in Park Slope, or a haunted brick factory with no windows in Williamsburg, but these were all working or lower class white or Hispanic neighborhoods at the time.

What they didn't do was gentrify Harlem, the South Bronx, East Flatbush, etc. They were scared of these neighborhoods, and given the racial animosity of some of those years, maybe some of that fear was justified. Most of it wasn't though—it was just ignorance. This has changed a lot, especially in the last 15 years— whites are less racist, and more of the gentrifiers are minorities themselves, but historically race played a huge role.

And the racism wasn't restricted to the potential gentrifiers. There was plenty of institutional racism too. First, in the banks, who wouldn't write loans to certain minority-majority neighborhoods ("red-lining") as well as the landlords, who often saw more profit in burning down their buildings in the South Bronx than redeveloping them for the poor or working class.

Also the government was pretty racist too, and seemed content to let violence, drug-abuse, and other social ills take over neighborhoods like Mott Haven and Hunts Point, rather than spend the money required to fix the problems. They even encouraged this process, by in-gathering a lot of the poor from all over the city into poorly thought-out housing schemes. And as the fires began, the city government let them burn, because the people who lived in the South Bronx were poor and Black and had very little institutional power or representation. 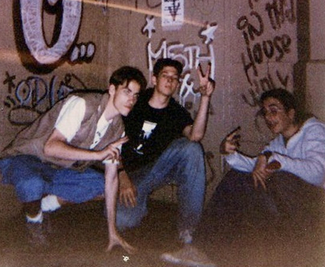 I could go on, because so much of NYC development policy hinges on race, but I need to mention a few other factors that have delayed a resurgence in your neighborhood. First was terrible urban planning in the first half of the 20th Century, mostly under a megalomaniac named Robert Moses. He's the planner responsible for The Cross Bronx Expressway, the Major Deegan, the Sheridan, and the Bruckner, which together completely cut off the area on all sides, separating the South Bronx from wealthier areas to the north, and from the water, which is a critical asset for redevelopment.

These roads are terribly polluting, built in the ugliest possible way, mostly elevated, and exist to get wealthier people from the suburbs into and out of New York as quickly as possible. When they were built, they destroyed a ton of housing, and over the last sixty years, have been a major development obstacle and health hazard. Thankfully, modern planners recognize this, and have begun to brainstorm ideas about how correct these mistakes (removing the Sheridan is an obvious first step), but these projects will take decades.

The South Bronx has some other problems too, most of which are related to the stuff we've already discussed. These include continuing safety issues related to gangs, brownfields and other environmental disasters along the water, a continuing prostitution problem in Hunts Point, etc. These problems will probably get more attention under the incoming mayoral administration, but they will also take time to solve.

Then there's the problem of bad press: many New Yorkers, even natives, have no idea how much the South Bronx has changed since the '70s. They still picture it as Fort Apache. But it isn't! There are new parks, like Barretto Point, an embryonic hipster scene along Bruckner Blvd by the old antique shops, art shows at the Bronx Museum of Art, green housing developments like Via Verde, and so on. We in the media should probably do a better job celebrating this stuff.

But until we do, the South Bronx is going to be undervalued and gentrification will progress slowly. That's not such a bad thing. As we've discussed before, gentrification is a mixed bag, and slower growth might give time for more thoughtful development that allows more of the good (safety, better amenities) with less of the bad (wholesale eviction of existing population by rising rents). But if you live there already and have some cash, maybe it's not such a bad idea to scoop up some properties with good bones! Because while the South Bronx will be one of the later stops of the redevelopment cycle, it is rising and will continue to. As you said, proximity to transportation and to the very hot Harlem market just across the river means that gentrification in Mott Haven, Hunts Point, Port Morris, and other neighborhoods there is really a question of when and not if.

So while we wait for the South Bronx to rise, what neighborhoods will gentrify first? Well, barring terrorism, Atlantis-type floods, Ebola, etc, these are the Native New York predictions: North Brooklyn is pretty much done, since $3,000 rents have already hit the graveyards past Bushwick. That leaves South Brooklyn. The areas with the most attraction to gentrifiers, in terms of transportation, housing stock, and amenities are probably Sunset Park and Borough Park out to Bay Ridge, and neighborhoods past Ditmas Park along both sides of Flatbush. But that only goes so far, because pretty soon you hit already expensive areas like Sheepshead Bay and Dyker Heights.

Meanwhile, all of Western Queens will continue to pop—Astoria and LIC still have a little room for organic markets and overpriced coffee, especially at the North and East ends, and Sunnyside, Woodside and the other neighborhoods along the 7 to Flushing will also see a big influx of artsy types over the next 10 years. We should also include Staten Island, particularly the grittier areas around the Ferry, and the remaining ungentrified parts of Jersey City in this discussion, but I'll end here because I don't want to encourage any of you to move down there.

N.B.: A related and potentially more interesting question is what will happen to the already gentrified areas of the city over the next several decades. Is there any end to the real estate inflation powering the gentrification cycle? Will Bill De Blasio's socialist inclusive upzoning plans slow it down? Will smaller apartments become the norm, allowing more people to pack into areas that are currently too expensive? Will violent class warfare consume Manhattan, forcing the rich to flee to barbed-wire enclaves in Connecticut? Only time will tell!

Map via MetroTrends. Ask A Native New Yorker anything by emailing our Tips address here.

#ask a native new yorker
#the bronx
#original
Do you know the scoop? Comment below or Send us a Tip