This week's questions comes from a new New Yorker worried about crime going up during a de Blasio administration.

I'm a recent arrival living in an overpriced Carroll Gardens apartment. I recently spoke to an old timer who told me that during the Koch and Dinkins days, the neighborhood was overrun by thugs from the Red Hook and Gowanus projects, and I'm worried about what might happen under a pinko Communist soft-on-crime Bill de Blasio administration. How bad was it in the old days? Do you think we're headed back in that direction?

A Native New Yorker, whose birthday is today, replies:

When you get native New Yorkers talking about the bad old days, if you listen closely, you'll detect two distinct emotional currents: fear and nostalgia. I'll discuss fear first, because it's easier to understand.

Anyone who lived through the '70s or '80s in New York can instantly recall a set of scary memories. Off the top of my head this morning: watching my grandpa stare out the window of his little brick house on Holland Avenue in the Bronx, observing the rapidly degentrifying street for signs of the kids who kept torching cars. Or driving home from the Bronx to Brooklyn, and waiting nervously at that light by the Bruckner, as the squeegee guys swarmed the windshield.

Or later, watching all the twitchy crackheads stumble by the Union Square liquor stores, wondering if any of them was going to get stabby while we walked by to school. Or that time riding back from A&S on Fulton with my mom, waiting at a stop sign on Dean, when some strutting teenager pulled a gun out of his waistband and mimed squeezing the trigger: pow pow! 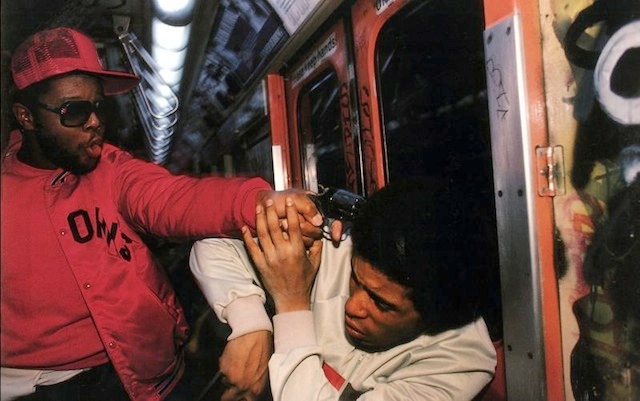 An undercover cop points a gun at a subway mugger in 1980. (Courtesy Bruce Davidson)

I could go on and on; anyone who lived here then could tell you a dozen stories that were similar. Crime really was bad: in 1990, some 2,400 people got murdered here, which equals a murder rate about five times higher than the one we have today. And that's just murders—there was an appalling number of muggings, rapes, robbery, you name it. The very real possibility of getting wacked or jacked left most of us feeling scared as crap just going about our daily business. And even if you didn't experience any of that yourself, your mom or your cousin had, and each day, as you walked through the filthy, decaying streets, you were reminded that you could be next.

The good news is that we're not going back to those times, at least not anytime soon. I've read a lot about the causes of the great crime decline of the last twenty years, and the sense I get is that it was multivariate. Some of the factors cited by experts include better policing strategies, a general increase in prosperity, increased surveillance, higher incarceration rates, a decrease in lead levels (from a ban on leaded gasoline, leading to better self-control among a less lead-poisoned population), the legalization of abortion (leading to less kids raised in miserable circumstances), and the end of the crack epidemic.

I doubt if there will ever be a definitive agreement on which of these factors was the prime mover in the crime decline, but the point is that no matter who is mayor, most of these trends are going to continue. They are economic, historical, and cultural shifts larger than any one mayor. At most, a Mayor de Blasio will move some government dollars from policing and incarceration to education, housing, and healthcare: do you really think that's going to lead to a 1990-style murder epidemic?

It won't. Crime will stay low and may even continue to fall no matter what de Blasio does. It might never reach the levels they see in other developed countries like Japan (if we had their murder rate, New York would see only 50 homicides a year), but it's not going to go back up to its old levels in our lifetime. Of course, you won't hear that from conservative outlets like the New York Post or the Wall Street Journal: they'd rather keep you distracted worrying about ghosts, rather than focus on the very real threats to your well being, like the lack of affordable housing or early-childcare services.

I want to end by talking about nostalgia. While I was writing out that list of '80s memories, I found myself remembering something Milan Kundera wrote:

Not long ago, I caught myself experiencing a most incredible sensation. Leafing through a book on Hitler, I was touched by some of his portraits: they reminded me of my childhood. I grew up during the war; several members of my family perished in Hitler's concentration camps; but what were their deaths compared with the memories of a lost period in my life, a period that would never return?

This passage comes right after one of his most famous lines: "In the sunset of dissolution, everything is illuminated by the aura of nostalgia, even the guillotine." This quote has always puzzled me. But it captures something strange and elusive, which is that even though the '70s and '80s sucked here, from time to time I find myself missing them, or certain parts of them—the graffitied subways, the old Times Square, the Albee Square Mall. Why is that?

It's more than the normal nostalgia for one's youth. I think maybe it's because there was something in those old times that's missing in our present. The old New York, though threatening, was at least personally threatening. When you walked through it, you were present, awake, and aware in a way that we aren't today, gliding through Bloomberg's New York of glassy skyscrapers with our earphones on. And there was a sense of connection to each other, at least in the sense of facing a common threat or surviving a common challenge, that also seems to have disappeared.

I don't think Bill de Blasio is going to be able to fix all that, but I do think he'd understand what I mean, and that's a start.