This week's question tackles the most infamous footwear of summer in the city: flip flops.

I have a long subway ride home from midtown, and as the weather has gotten warmer, I’ve noticed a lot of people wearing flip flops, and it’s really grossing me out. I’m not talking about the women who clearly have their uncomfortable work shoes in a bag and are just riding in flip flops because their feet hurt. I’m talking about these people who have definitely been walking around the city all day in flip flops, and who have literally blackened the soles of their feet with NYC grime. It’s like, fine, you don’t care about your own feet, and are willing to expose them to flesh-eating bacteria or whatever lives on our filthy sidewalks, but what about all the people who have to see your feet and feel sick? Isn’t there some kind of NYC summer dress code that prevents this kind of thing?

In horror on the Q train

New York City has no mandatory dress code in any season—this is because we were founded by the Dutch, with their “live and let live” relaxed attitude, and not by the puritanical English who took over decades later. Maybe in Boston you’re thrown off the T for wearing the wrong kind of shoes, or wearing white after Labor Day, but here we recognize a great personal freedom in manner of dress.

However, our tolerance is not limitless, and some people inevitably will cross the line. Safety and hygiene in a crowded city demand certain things from all of us—not sitting nude on subway benches, for instance. The problem with flip flops is that as you walk, there’s inevitable slippage where your skin contacts the pavement. Over time, this builds up into a layer of muck, which is unhealthy, because God forbid you have a small cut and get some of that antibiotic resistant bacteria in there. 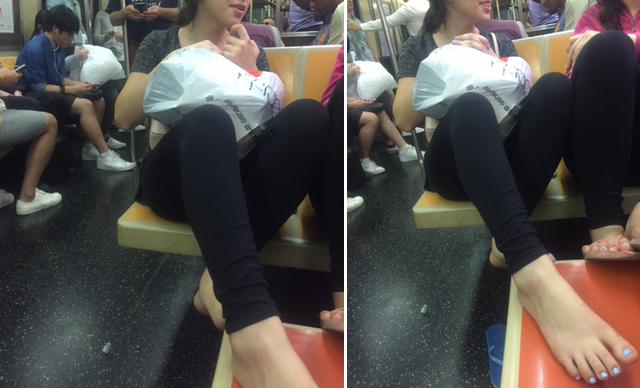 It is also unsafe for others, because in the event of an evacuation are you really prepared to run while wearing those things, or are the rest of us going to have to carry you? It is for these reasons that you should keep the flip flops within a 5-block radius of your apartment. If you’re going further than that, strap on something a little sturdier.

That’s not the real problem, here, however—that would be the unhealthy hangup you’ve got staring at other people’s feet on the train. Yes, filthy feet are gross, but there are many gross things in an average subway car: people eating take-out and spilling it on the floor, everyone with colds transferring their germs to the poles, or the fact that just about every surface has been peed on or worse sometime in the last month, to name just a few. To successfully commute daily, you must be able to ignore all of this. Cultivate a zen-like detachment—if you can’t do it naturally, meditation classes may help—and when the inevitable urban provocations disturb it, retreat to that inner stillness. That should work for anything up to being bled or barfed on.

A sure sign of lack of detachment is the need to correct the behavior of others, or to write to a local blog complaining about them.

There are probably exceptions—you wouldn’t want your doctor at a hospital wearing flip flops, and you might suspect your money wasn’t in good hands if your banker showed up to a meeting wearing jean shorts, and it might not be a resounding vote of confidence in the impartiality of the law if your sentencing judge was wearing a tank-top, but apart from these fairly rare and mostly professional situations, the problem isn’t with the sartorial offender, but within you, the anxiously judgmental observer.

This hangup isn’t entirely your fault; most of our culture’s fashion norms evolve over time to favor the groups in power, and make sure everyone’s status (young or old, rich or poor, powerful or dispossessed) is obvious at a glance, and to guarantee that those people who transgress the boundaries get special scrutiny. Like anyone raised in this society, you have absorbed these values by osmosis, but that doesn’t mean you can’t question them. The next time someone tells you, say, that you shouldn’t wear shorts at work, tell them to stop reifying the power dynamic of an oppressive patriarchy, and that your abbreviated trousers are meant as a bold political statement, and for that reason you intend to let your freak flag fly.

To warmer days ahead,

N.B.: Even worse than flip flops are those five toed runner’s shoes. There’s something so disturbing and unnatural about giving each toe its own little section. Who’s with me here?

#aanny
#ask a native new yorker
#flip flops
#original
Do you know the scoop? Comment below or Send us a Tip