Ask A Native New Yorker: Is NYC Graffiti All Wack And Shit Now?

This week's questions comes from a transplant who wonders if the NYC graffiti scene has lost its edge.

When I was a teen dreaming of moving to NYC, movies like Wide Style and, later, Style Wars, made me incredibly excited to live in a city with such a vibrant graffiti scene. Now, in 2013, things are obviously very different—the subways are immaculately sterile, and most really good street art doesn't last long before it's painted over and scrubbed clean. At the same time, it seems like what used to be a renegade, underground act of defiance has become mainstream and commodified.

With the millionaire Banksy back in town, I'd love to know if you think street art has lost its soul? And if so, who's to blame? Are NYC's best graffiti days behind us?

You were right to admire those movies. Graffiti is the most important of all the native New York art forms. Think about it: jazz is all but dead, played in maybe one club and on one radio station. Hip-hop has gone unrecognizably pop, and the only time you see breakdancing is when someone is doing it for money in front of tourists. But graffiti endures. Through constant mutation, it has managed to outwit the government thugs on the Vandals Squad and survive the constant capitalist attempts by brands and galleries to co-opt its cool. You will know New York has finally been gentrified to death when graffiti finally disappears from its streets. 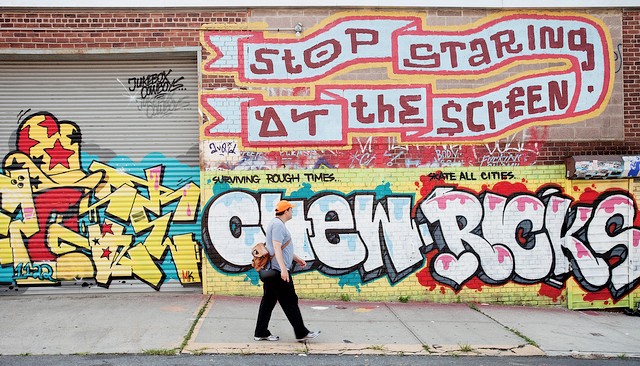 Before we discuss whether New York's graffiti is in decline, let's discuss what makes graffiti good, and then think about whether there is any good graffiti left in the city. There are four important factors worth mentioning:

There are graffiti artists working in New York today whose work stands up to some of this scrutiny. Resident artists like Faile, Bast, Judith Supine, Veng, Elbow Toe, Cost, Swoon and frequent visitors like How and Nosm, Sheyro, Ron English, Gaia, and Shepard Fairey. 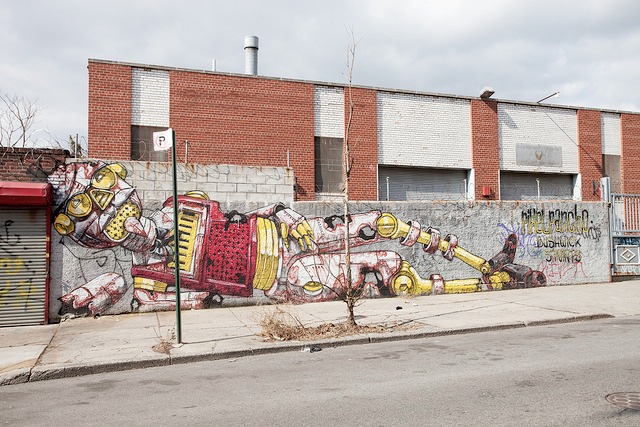 And what about Banksy (a/k/a Robin Banks, Sir Banksalot, Rob Gunningham, etc)? Like him or not, he's demonstrated artistic skill in a variety of mediums, like stencil, spray paint, marker, sculpture, performance art, etc. His work is widely distributed, thoughtfully placed, mostly illegal, and often cleverly responds to its location. Banksy's pieces usually offer a wry commentary on politics, society, and the stupidity of the art market, among other topics, and I've never seen him out partying with Paris Hilton (though he once did a project about her.) He has become wealthy selling his work, but he seems rightly embarrassed about this, and tries to make up for it by giving some of the money away to charity. And from time to time he's used his celebrity to draw attention to human rights issues.

I think the worst thing you can say about him is that he's manipulative: he plays the press and public especially well with his JD Salinger routine. After following his work for ten years, I sometimes worry that the whole thing is just one drawn-out mind-fuck that he's perpetrating on his fans. Like at the end, he'll pull off the mask and it'll be "surprise—the whole thing was a Coke campaign!" 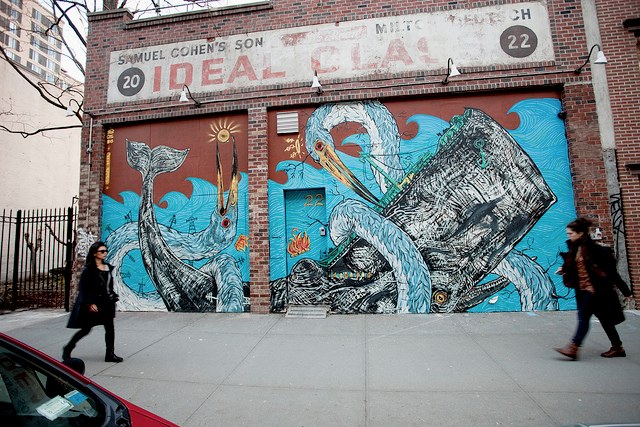 It's hard to unambiguously love an artist who might really think you are an idiot. But let's put that aside for the moment. His presence in New York this month is a positive addition to the scene, and even if you think he's a wack-ass British toy, he's drawing positive attention to graffiti as an art form and to neighborhoods that don't usually get a lot of attention from the media. So give him a break.

And what about the scene itself? Is it getting better or getting worse? I asked a few of my graffiti expert acquaintances for their opinions:

"I never thought 'street art' had soul nor do I think it's on the streets. It is in hubs where tourist go or trendoids inhabit. This tactic was invented by Basquiat and Haring as a way to pretend that they were all over the city." - Hugo Martinez, founder of United Graffiti Artists (1972)

"I think that the street art scene in New York achieved its zenith at 11 Spring. It felt much more communal at that point to me." - well-known street artist, who asked not to be identified, because he wants to keep it real.

"With very few exceptions, street art in NYC has been dying a long and painful death. Mind you, you wouldn't know it from all the hype, especially that which purposefully conflates street art with mural art. Don't get me wrong, I enjoy murals as much as the next person, but let's call them what they are: permissioned production pieces. I certainly don't begrudge any artist the opportunity to make a living off their art. But it smacks of hypocrisy to brand yourself an underground renegrade if you're asking for permission and sending out press releases to announce your latest work." - Luna Park, New York's reigning top street-art documentarian 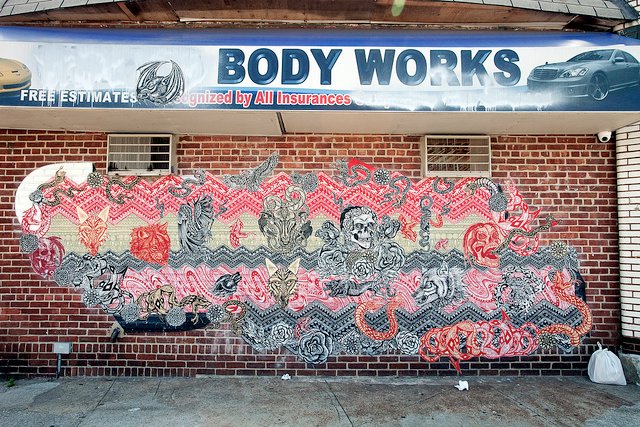 The common theme here is that graffiti was always better at some point in the past. But with all due respect to my friends, this reflects a very common and pernicious psychological distortion. There's something about the human brain that tends to remember the past as being better than the present: more authentic, more human, more fun. But, as we've discussed before, this is unzen. Nostalgia is death. It's a way people try to protect themselves from experiencing the uncertainties and discomforts of the present, but it doesn't work: you just end up grumpy and old and miss out on all the fun, interesting, and challenging things that are going on right in front of you.

So, remember: even though all the graffiti artists working today are sell-outs, and toys, and don't respect their elders, and are way too quick to move into the galleries, and no one knows how to do a real throw-up anymore, and the last guy who really went all city has been dead for thirty years, that's the way it's always been, and always will be. Enjoy the scene you've got. Like Ferris said: "Life moves pretty fast. If you don't stop and look around once in a while, you could miss it."

N.B.: I know that many consider Cornbread, in Philadelphia, to be the first graffiti artist. But graffiti as a movement belongs indisputably and forever to New York.

N.B. 2: Don't blame the artists for selling out. If you have to assign blame, 50% of it is the fucking exploitative commercialism of our Capitalist culture, 25% is parasitic brands that prey on street culture, 20% is the idiots who consume graffiti thoughtlessly by supporting bad art, and 5% is the artists themselves selling out the scene in order "to eat."

N.B. 3: I keep a list of current popular street artists and locations at Grafrank.com, and still document the scene on Flickr.