Ask A Native New Yorker: How Does A Pregnant Lady Get A Subway Seat?

I've lived in Brooklyn for 15 years, first in the South Slope, now in Windsor Terrace. At long last (I am over 40), I am happily pregnant like all the other breeders out here.

I'm now more than six months along, and the bump is large, and I wear clingy maternity clothes... to TRY TO GET A SEAT ON THE FRICKING SUBWAY. I have started carrying stupid paperback baby books as a prop. Flipping New Yorkers don't give up their seats for pregnant ladies and I am starting to feel homicidal. I'm due in late July, by which time I might actually freak out on the F train in my hour-long commute to East Midtown. What do I do? I'm thinking of asking people in the disabled seats to get up, but so far I haven't gotten up the nerve.

Yours Truly,
Happily Pregnant Except On The Subway

The Native New Yorker decided to throw this question to Gothamist co-founder Jen Chung, who is not a Native New Yorker, but is currently raising one. Jen has strong feelings about whether children deserve seats on buses.

Congratulations on the new Native New Yorker you're currently baking in the oven! And as someone who also took the subway until my ninth month of pregnancy, kudos on involving props in your enceinte commute. The easy response is, "YES! Ask other subway riders for their seats." But let's walk through this. 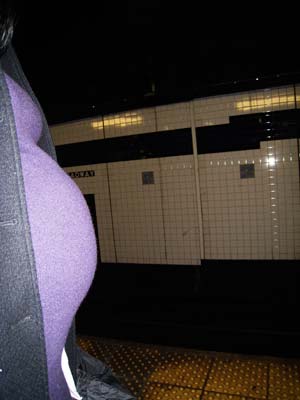 Courtesy Jen Chung Private Collection
Speaking up on the subway

—also known as trying to engage your fellow commuters in conversation—is a lost art. We're all so caught up in playing Candy Crush or reading whatever longform we've saved to Instapaper (Oliver Sachs's New Yorker piece about Spalding Grey is wrenching!) or, God forbid, eating a salad, that we're not aware of anyone or anything. Maybe it's some kind of 2015 version of trying to block out the onslaught of Tweets, Instagrams, Slack messages, push alerts and whatever else is distracting us from other, better work diversions, like is anyone ordering $5 burritos from DoorDash right now?

Many times, when people speak up on the subway, it's for the good of society as a whole. Like the woman who yelled at the subway flasher—no one should get away with that shit! I feel the same way about people who keep their backpacks on in crowded subway cars, people who lean their bodies over the seat divider, take up extra seats with their bags or block subway seats with their strollers or bikes—tell them to shape up, and take the seat! And I'd like to think that we live in a civilized metropolis where seniors, the disabled and small children get subway seats, no matter how overcrowded the train gets. Even Jake agrees with me, as this is his order of mass transit seat precedence: "Disabled old person, Disabled person, Very pregnant woman, Child, Regular old person, Not very pregnant woman, Regular adults."

When I was pregnant and was hoping for a seat, I'd unbutton my coat, stick my belly out a little more and rub my bump to up the obvious factor. This did not always work! Other subway riders (likely women who have also been through the shit) will definitely be emboldened to help you get a subway seat. When I was pregnant, women who were standing on crowded trains asked me if I wanted a seat—I think they would have made a fuss for me. These days, if I see a pregnant woman, I'll try to get her a seat, even if I'm standing. For every person that inwardly thinks, "I didn't tell this lady to get pregnant," there are probably eight people who will be empathetic.

One legitimate worry I have is assuming someone is pregnant when she is not. A subtle way for guilty subway seat occupants to deal with this is to just get up out of your seat—you're probably sitting all day at work, what's another 20 minutes going to be? Work those quads!