Ask A Native New Yorker: How Can I Avoid Getting Robbed And Murdered?

This week's question comes from a Williamsburg resident who's tired of getting robbed.

Recently $80 was stolen out of my gym locker; the thieves were able to somehow pry open my combination lock with some sort of special tool to get my money while I was pumping iron (I'm benching about a buck ninety now). During my time living in New York, my bike seat was also stolen!

Do you have any advice on how to not get mugged, robbed and burglarized in this den of thieves?

Listen, I don't know how shit works in Schenectady, but in New York City, leaving $80 in cash in a gym locker is called "asking for it." A real New Yorker would have had that cash rolled up in ball with his house key and stuck deep in his high tops— any burglar that broke into his locker wouldn't find anything but his work clothes and maybe a small pile of illegal narcotics or bootleg DVDs that he'd been secretly storing there.

But of course I jest: the native would never have a gym locker, because he knows that the real theft is that gym taking you for $80 A MONTH when you're going maybe six times a year. He gets all the exercise he needs walking up subway stairs and fronting about how real he is, and that's basically free.

It's questions like this that reveal the great chasm of history and experience that exists between the native New Yorker and the immigrant: sometimes I doubt it can ever be crossed. Can you teach a bird to fly, or a fox to hunt, or a tourist not to get robbed? I don't know. I really don't. Luckily, for sociological reasons, crime will be a constantly decreasing threat in the future, and fairly soon, neither the grizzled native nor the absurdly naive recent-arrival will face much in the way of security threats.

Technology advances mean we are simply carrying around less stuff, and the stuff we are carrying is more secure. Remember ten years ago when a normal person might carry a watch, miniDisk player, camera, and cell phone? Now all of those things have been reduced to a black mirrored slab, which is increasingly secured— PIN numbers, double-factor authentication, GPS lojacks and so on. Your iPhone or Android will soon subsume your keys and your wallet along with all its cash and cards. And that device is getting ever cheaper. In 10 years it'll be $50 and so annoying to steal that no one except the most desperate and stupid criminals will even bother. Almost all crime will have migrated by then to cyberspace: you'll be more worried about hackers stealing your hard-won World of Warcraft gold than anything else.

A similar argument goes for most of the stuff at your apartment, or in your car: possessions will be decreasing in cost for the foreseeable future, and along with them, your concerns about them being stolen. This is a good thing! Wisdom teaches that the man with the least attachments to possessions is the happiest and most secure. Sure, you may still have some items that carry emotional attachment, like your grandfather's medal or your grandma's diamond ring. But if you're wearing those around and they get taken by some creep, I'd say that devil might actually be an angel who's freeing you of your attachments to this Earth. Youknowwhatimean?

What about your physical safety? Shouldn't you still worry about that? The answer is increasingly no, you should not. Crime in New York is down across the board: murders, rape, muggings, you name it. And the violent crimes that are committed are mostly being committed by someone the victim already knows, in ever-tightening demographics largely determined by socioeconomic class. If you can avoid involvement in drugs, gangs, and entanglements with domestic batterers, you're most likely going to lead a long life that's barely touched by crime. And if you are in one of these groups, you have my sincere apologies: our society is terribly unfair, and what limited programs we provide to help get you out of these situations are not close to adequate. I hope that the future New York, with its more liberal form of government, will provide more help to you.

So for most of you reading, safety advice is unnecessary. But for the unlucky few who will ever face a real threat, I will offer a few words of native advice. First, avoid being a target in the first place, by TAKING YOUR FUCKING EARPHONES OFF and looking around. Second, radiate an intimidating presence with your New York body language: a combination of nervous twitches, commanding strides when you walk, hands ever at the ready to bring a terrible justice to anyone who would cross you. You might consider adding some audible muttering. 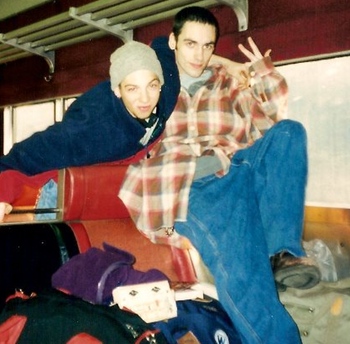 In High School, when I weighed approximately 120 pounds and seemed to have "please rob me" written across my forehead, I preferred to constantly repeat the lyrics to Public Enemy's Bring the Noise under my breath whenever I had to ride the train alone, and I think that the combination of doing that and running at the slightest scent of danger helped me avoid like 85% of the potential muggers. Sadly, that still meant I got robbed about nine times a year.

But let's say that stuff doesn't work, and you find yourself face-to-face with a cracked-out robber. The thing to do here is to quickly give up the mugger money you've been keeping in your pocket, separate from your wallet, and hope he runs off. If he demands your phone and wallet, no sweat— just give it to him. You've already created a list of every card in the wallet, and you never keep more than like $50 in there anyway. And while you're handing it over, you're making a quick mental snapshot of what he looks like, so you can tell the nice police officers who will quickly arrive to take you on a canvas ride. Sure, it's a terrible thing and you might have a little PTSD after, but you'll be that much closer to winning the respect and trust of us natives, who feel like anyone who's never been robbed is basically from Boston or something.

And just for the sake of discussion, even though it's phenomenally unlikely, let's say that you've come across the one mugger who really wants to fuck you up, because he's high on PCP or whatever. In that case, there are a few more native tips that will be helpful. Unfortunately, because of anti-libertarian rules of Bloomberg's nanny-state, you can no longer possess the nunchucks, throwing stars, gravity knives, extensible batons, and brass knuckles that every self-respecting New Yorker used to carry around all the time. Even pepper-spray has basically been banned, after some twitchy citizens accidentally gassed a whole subway car or something.

So you're basically left with the three tools god gave you: your hands, feet, and keys. Use the keys to go right for the eyes of the potential assailant—you be surprised at how getting stabbed in the eye can really put someone off. At the same time, use the other hand and your feet to punch and kick at the exposed soft spots: start with the genitals and neck. And of course, scream loudly the whole time: "HELP" is probably the most honest thing to yell, but go with your gut—"FIRE!" or "BANKSY!" will probably also work. Taking self-defense classes will make all of this automatic—most YMCA's offer cheap instruction.

Please, though, remember what I said: you're probably never likely to need any of this advice, and thinking constantly about your safety and the security of your possessions is one of the main tools the forces of darkness use to get you to avoid focusing on our society's real problems. While you're busy worrying about getting jacked, the rich actually are stealing your money, making your housing less-affordable, and trying to get you obsessed with stereotypes about violent poor people and minorities, so you don't direct your very justifiable anger where it really belongs, at The Republican Party and the billionaires pulling their strings. They are the real enemy of your safety and security. Fight them!

N.B.: The NYPD actually has a lot of helpful safety tips about avoiding crime in New York.