This week's question comes from a New Yorker who hates the new mural that a graffiti artist was commissioned to paint for a department store across the street from the 9/11 Memorial.

That mural across from the 9/11 memorial makes me want to barf. Unveiling it a day before the anniversary of 9/11 seems crass to me, as it's essentially a promotion for Century 21 (my friend who works in media says he's been inundated with press releases about it.)

Would it be wrong to splash a few gallons of blank paint over it tonight? Or am I being overly sensitive? And is there even any art that could be presented at Ground Zero that would adequately honor the dead and convey the horror of that day?

I love graffiti almost as much as I love New York—it's our city's most original and vibrant art form. So it pains me when I see graffiti being done badly, like a shitty tag sprayed over a great mural, or a really terrible, messy, corporatist, unoriginal, pandering, self-promoting pile of steaming visual bullshit wheatpasted over a dignified building DIRECTLY ACROSS THE STREET from our country's most hallowed memorial. 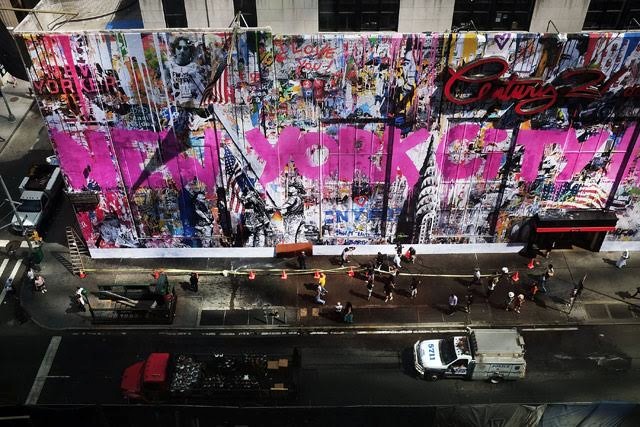 There are some New York graffiti artists who might be able to carry off the gravitas required of this spot. JR, with one of his striking photographic meditations on humanity and suffering. Swoon, with one her intricate installations about love and loss. Lee Quinones, Lady Pink, or TATS Cru, if you wanted something huge, powerfully illustrated in the authentic New York style.

Mr. Brainwash is to these graffiti artists as George W. Bush is to Franklin Delano Roosevelt‚ superficially similar, but with none of the character or intelligence. You know when you buy a bagel at the airport somewhere, and you know it's going to suck because it's the product of some huge corporate behemoth shamelessly ripping off an authentic New York creation? But you buy it anyway and then when you bite into it and it tastes like cardboard mixed with cigarette ash, and you hate yourself for being fooled and suddenly realize, once and for all, the importance of authenticity? That's a Mr. Brainwash moment.

[The mainstream artist Mr. Brainwash most resembles is Richard Prince. They both appropriate the work of others, add a few strokes of color, and then sell the work to two types of collectors: rubes, and post-modern art fans interested in "re-appropriation." There is substantial overlap between these two groups.]

I feel bad having to say this, again. Mister Brainwash doesn't seem like a bad guy—in Exit Through The Giftshop, he comes off as kind of a lovable oddball, and his intent seems good. New York City IS Beautiful, and the resilience of the city and all of our 9/11 heroes does deserve to be celebrated. He's just the wrong artist for the job. 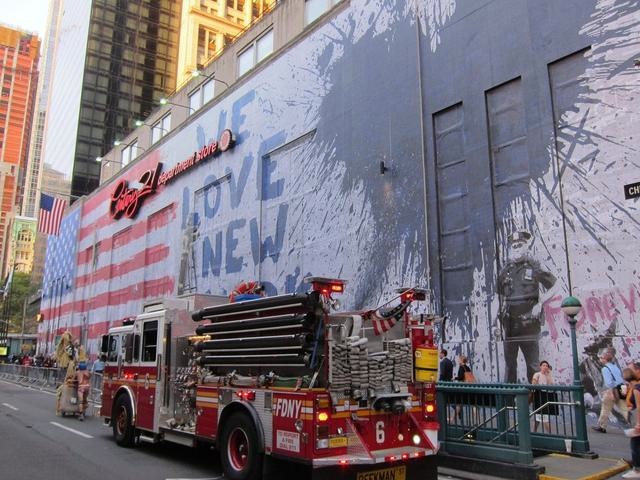 Any art displayed next to Ground Zero needs depth. It needs to speak to the site and its location. It needs deep originality and a powerful message. It needs the best execution and skill the art world can muster. This year's mural, like the splattered heart and dripping flag he did last year, has none of that. It's like Mr. Brainwash bought one of those cheap 9/11 souvenir books the hawkers sell around the edge of the site, picked out the most famous photographs, and told his assistants to slap them together with some paint drips. The whole thing just feels lazy and recycled.

Then there's the slogan. Mr. Brainwash has always had the rep of a manufactured, corporate artist, supported by tons of money from parts unknown... his family's real estate business, Banksy, who knows. The "_______ is beautiful" catchphrase has been his main signature since he arrived on Los Angeles' graffiti scene ten years ago. Putting it up here, right under an enormous Century 21 logo, is gauche, inappropriate marketing for his personal brand and the corporate partnership that paid for the installation. Imagine Nike putting up a huge "Just Do It" mural on this wall, or McDonalds running an "I'm Loving It!" billboard. This kind of advertising has no place a stone's throw from the memorial's reflecting pools.

I get that the World Trade Center site is more than a memorial, and a lot of people feel that after 14 years, it's time to treat it like any other busy corner of the city. There's been plenty of other garish advertising, hot dog vendors ripping off tourists, lunch hour workers eating burgers on the memorial benches, rapacious real estate profiteering, vendors selling selfie-sticks and t-shirts, and all other manner of inappropriateness big and small going on this whole time.

But sometimes it's important to stand up and say, "Hey, 2,753 people died here 14 years ago, can you show some fucking respect?" This is one of those times.

N.B.: This outrage may be hard to understand for those of you who weren't here on 9/11. I think even after all this time, there's still an enormous chasm of history that separates everyone who lived through it from the people who moved to New York later on.

#advice
#ask a native new yorker
#original
Do you know the scoop? Comment below or Send us a Tip