I have been going to protests every weekend, and they feel therapeutic to me, and I like to believe they help. But are they helping? Should New Yorkers keep protesting?

Sincerely,
Power to The People

Of course protesting helps, and you should keep doing it. It makes a difference in three ways: by showing the opposition Democrats that they have a huge base of support, and shouldn't waver in their beliefs; by reminding the leaders of the Republican party that if they push things too far, we could have a revolution on our hands; and by raising the spirits of those protesting, which is very important, for this will be a long struggle.

Take Occupy Wall Street, which is often given as an example of a big protest that didn't accomplish much in the way of reform. But quite the contrary: it raised the issue of income inequality in a way that had never been done before, which led to a ton of consequential changes in this country, most especially Obama's 2012 victory. The people who camped in Zuccotti Park changed the conversation, and that changed history.

New York has had a long tradition of protest, going right back to The Flushing Remonstrance against Peter Stuyvesant (that one was over Quaker rights to worship). Since that time we've had hundreds of huge protests, riots, and political actions: Draft Riots in the 1860s, marches for workers' rights in the 1920s, the occupation of Columbia in the 1960s, etc. If protests are so ineffective, why would they keep happening? Wouldn't someone have eventually noticed, "Hey, nothing ever comes of this!"

I've heard it argued that putting together a protest in these earlier times took more work, and required a lot of organizing that led to commitment to long term action. Today, with Facebook groups and Twitter, a protest can fly together almost by itself, and even if it goes hugely viral and half a million people show up, their commitment beyond the one protest is quite low. I think this view is wrong; Facebook might actually increase commitment by getting you to join a group and receiving updates from them for the rest of your life, or at least until you figure out their impossible settings. I think organizers in the 1960s would've loved to have those capabilities to organize future actions. 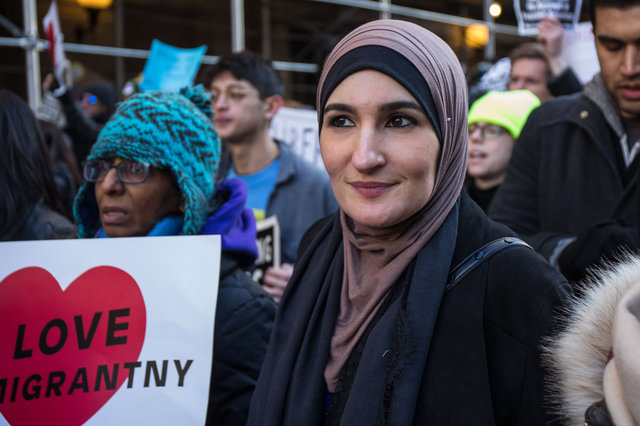 From this past weekend's Immigration ban protest. (Scott Lynch/Gothamist)

What about the "headfake" theory of anti-protest? That's the one that says the current administration is deliberately making provocative moves, like banning Muslims from entry to the United States, knowing they'll get a strong protest reaction that will draw the media's attention away from other, more important stories, like Steve Bannon taking over the national security apparatus. To me, this sounds like paranoid thinking: never assume malice when simple incompetence will suffice. You really think, after the first week they've had, that Trump's circle has such foresight into the future as being able to predict the outbreak of massive unplanned protests? And that this would drown out some other piece of news? Even if you believe that, did it work? The Steve Bannon story has been front-page news for three days: it's on the front page of the Times right now.

No, I think if you're going to engage in conspiratorial thinking you should ask who benefits from discouraging protest movements. Surely you could make a strong argument that people who say "protests never work" are in the employ of people who don't want to see millions of feet hitting the streets. And who would that be? It seems to me that Trump has basically tied up all three branches of government, and the only real risk to his presidency now is a sustained uprising against his policies, of the sort we saw during the Arab Spring. The Women's March last weekend, and the wildcat airport strikes this weekend, could, if you squint, begin to look like the start of an uprising like that. 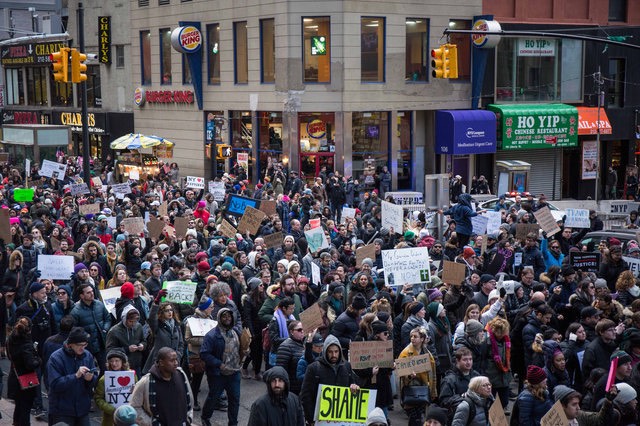 Even if we don't end up with a Tahrir Square, the protests certainly energize the participants (and even people watching on TV!) That energy can get poured back into other types of action: letter-writing, organizing for the midterms in less than 2 years, raising funds for legal action with the ACLU, etc. Yes, some of that would have happened anyway, but nothing adds a kick in the pants like marching down 5th Avenue with 400,000 other people. So keep doing it. For the sake of our fragile democracy, we need an emboldened opposition, and unfortunately, there will be daily and weekly occasions to march for the next four years.

N.B. The best list of protests and actions in NYC can be found here.

#ask a native new yorker
#protesting
#protests
#original
Do you know the scoop? Comment below or Send us a Tip