ASCAP Brings Music From the Dance Floor to the Court Room 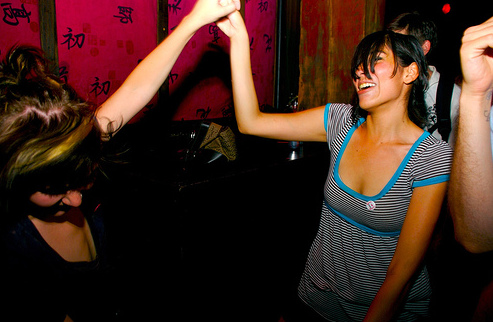 Like Jay-Z's 40/40 Club before them, the NY Post reports that two more Manhattan clubs are now being drawn into a lawsuit for playing music they didn’t have a license to play. With the music industry in an increasingly sad state, you would think getting the tunes out to the public (not for downloading or stealing but for the pure enjoyment of listening) would be a good thing. However bars are finding they have to pay the piper to play the songs, lest they want to end up in court.

The Hiro Ballroom (at least ASCAP picked the home of the rudest bartenders and most expensive drinks) got caught playing the songs "Jump" by Van Halen and "Hey Ya!' by Outkast, turning the good time tunes into a huge headache (just look at those heathens to the left illegally dancing to illegal music!). The fact is that companies like ASCAP and BMI exist to collect license fees for their artists. According to MarketWatch "nearly 90% of the license fees ASCAP collects are paid as royalties directly to songwriters, composers and music publishers. The balance covers ASCAP ’s operating costs, which are among the lowest in the world for a performing rights organization, and the lowest by far in the U.S." Word is that lower-level artists rarely see any money, as the companies often pool the collection and divvy it up amongst the big names.

The Post reports that "since March 2006, neither Manhattan club had responded to ASCAP’s requests to purchase a license to legally play the 8.5 million songs in its registry. A judge could penalize the clubs up to $150,000 for each song named in the suit." That didn't stop ASCAP from sponsoring a party at Hiro Ballroom in November of 2006, though! Eight months after the club was on their radar they sponsored a party there for the movie Marie Antoinette, and we're guessing songs from the soundtrack (which features ASCAP artists) played at least once (illegally and right under their own noses)!

The other New York club that got hit is Fusion 215 for playing Usher and Clay Aiken (actually, there should always be a fine for playing those two). In total 26 separate infringement actions in 17 states have been filed and the clubs are facing hundreds of thousands of dollars in penalties. We've asked ASCAP for a figure on how much a typical NYC bar would have to pay for a license, and are still waiting for their response.

UPDATE: ASCAP sheds some light on this over at Brooklyn Vegan. Read their letter, here.

We've also been in contact with ASCAP and according to Vincent Candilora, senior VP of Licensing there, the average annual license fee for all bars, restaurants, nightclubs and similar establishments is less than $2.50 a day. With a maximum annual cost of $912.50 we wonder why any establishment would choose not to pay...