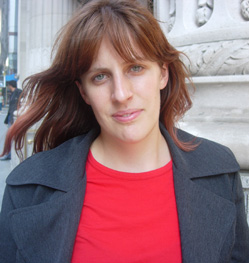 One of the most-talked about productions of this theater season has been Sarah Kane's Blasted at the indispensable Soho Rep. First presented in 1995 at the Royal Court in London, Kane's debut sparked enormous controversy for its unblinking depiction of brutality between the three characters: a bigoted, middle-aged English journalist, his unwilling young paramour, and a wild-eyed soldier who crashes into their hotel room to bring the savagery to new heights.

Or depths. By now you may have heard about all the eyeball sucking, sodomy and baby-eating, but simply describing such onstage actions can be misleading. As the play's director Sarah Benson tells us, it is not the intention of the play to shock audiences with Saw-esque gore, but to draw connections between the aggression in our personal relations and aggression between (and within) nations. As such, Benson's flawless production succeeds in rendering's Kane's bitter world view with stunning clarity and courage. Due to overwhelming demand, the production—which marks Blasted's first full-scale presentation in New York—has been extended through December 21st.

There's a lot of graphic violence in the play. I'm wondering what feedback you've gotten from audience members so far. I haven't been talking to the general public after the show, but we've had a real outpouring of interest and support for this production. I think the good thing now is that people know what to expect. It's not like they don't know what they're going to go see. I think people are prepared and I think—I hope at least—people are invested in the relationships in the play.

Do you know if anyone has walked out during the performance? I've seen about three walkouts during the performances I've been at, in total. And we expected loads. I'm shocked we haven't had tons of walkouts. I've seen three people walk out. I'm really surprised. We were really expecting people to be walking out in droves, so that's been surprising.

On Saturday night. What did you think? 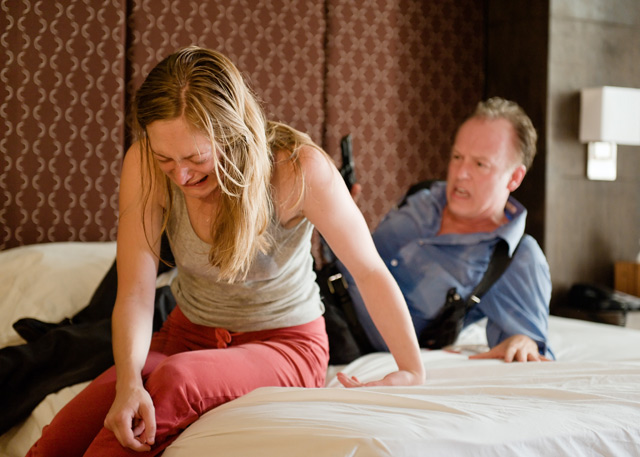 I thought the production was amazing and the performers were brilliant. I thought it was incredibly well-executed but I didn't enjoy watching it and I just don't like the play. I don't know, maybe her work just doesn't speak to me; I saw 4:48 Psychosis when it was at St Ann's Warehouse and I didn't care for that either. I found Blasted to be just one scene of incredible brutality after another and I just wanted to get out of there. That's interesting. I feel like the violence isn't trying to gross people out or willfully disturb them. I think that it's an attempt to reason with what's going on in the world. But not everyone's cup of tea.

Why do you feel this play is important? Why were you driven to produce it? I was very passionate about the fact that it was a play that could only happen in the theater. And that felt incredibly unpredictable and surprising and frightening at times; I think they are all incredibly theatrical things that can only happen in a live situation. I reread it about two years ago and was expecting it to feel dated, to be honest, because you know it's from 1995. When I read it, it reminded me of the Northern Irish conflict because that was happening when I was growing up. But I was kind of shocked to find that it felt really contemporary. And so I just felt like it was the right time to do it. Unfortunately, the play doesn't get any less relevant.

What were some of the biggest challenges you faced in producing the play? Certainly all the technical aspects of the play. And physically has to happen in the play. There's a huge amount of violence and that has to be very choreographed. And then design-wise and technically, it's ultimately demanding in every way. We started working really early on the design, with the set and the costume and lights and sound and all of those elements really had to be involved for us to make good choices. So it was incredibly technically demanding. It was kind of like directing a huge musical, to be honest, with the amount of choreography and lights and sound and safety. A lot of moving props, and we really had to rehearse everything and run it like it was a big musical, with that level of precision.

I want to touch on the violence in the play again. On one of the theater blogs called Parabasis people have been having a very thoughtful exchange about Blasted. I wanted to hear your reaction to one comment that I identified with, because I'd like to understand what I might be missing:

"I found myself, somewhere between the rape and the eyeball-sucking, wishing I weren't there. It's like being on a particularly brutal amusement park ride, or in the theatre at a horror movie, and thinking, 'I'm okay, but this is just unpleasant, and I am ready for it to be done.'

"I think the humanity and love, the flickers of which are vital to this play, get overwhelmed by the violence and brutality. I didn't go in even thinking it *might* be gore for gore's sake, but it really started to feel like that." Wow. I don't read my reviews so I haven't read any of this. I think the play is coming out the tradition of Jacobean tragedy and classical theatre and Shakespeare and Greek tragedy. That's how I read the scenes and all of the violence. This is something I talked about a lot with Simon Kane—he's Sarah's brother and he manages her estate. All the events that happen are all actually things that come straight out of the newspaper, so she didn't make up any of the violence. All of the acts—the eye sucking and everything—have come straight out of a newspaper. 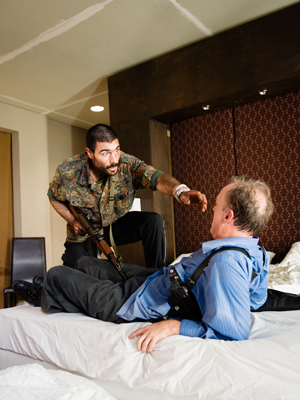 I think there was a really conscious choice on her part that the violence never feels crazily made up or gratuitous. She's working in the polar opposite direction to that. She has a specific world view, that's for sure. And so she's reflecting what she's seeing around her and I think, at least as I understand it, trying to link this kind of everyday rape, so to speak, you know, this sort of date rape, and linking that to the brutality that exists...To link how we treat each other in peace time and in everyday interactions to the wider global strife and civil war.

And I think when she talked about it once she said one is the seed and the other is the tree. That's certainly how I understand the violence in her plays. She's really looking at how we treat the person next to us, how do we treat the people who are closest to us. That's really the seed of civil war, of global crises; these international catastrophes really lie in how we treat each other day to day. So that was what interested me about the play. So it's upsetting to me to hear that it feels too much for people; we tried to make sure we were just executing the violence in the simplest way we could.

For what it's worth, the discussion on this blog was overwhelmingly positive, with people speaking about how much the play affected them and how important they thought it was. Well, that's good to hear.

What effect do you think performin Blasted night after night is having on these actors? It's really interesting, you know. At the end of the show the actors come up from the dressing room and their friends who come backstage are always like, "Are you okay?" They are having a great time. I know that sounds really weird, but, you know, it's purely technical for them. Well, it's not purely technical, clearly. But there are so many props, there's so much physicality. They're all doing accents. There's so much that they're having to navigate just to get through the show in the same way as if they were doing some huge epic piece.

Honestly, I think also the way Kane's work is put together, there is a kind of built-in relief for the actors. There is a sense of release in the end. I find it hopeful by the end. I know that everyone does. I think there is kind of built-in release to it. So the actors honestly are having a great time. We certainly had some times in rehearsal where we were dealing with these things that are difficult and challenging on lots of levels, but you know rehearsals were enjoyable and they are three great roles. The actors, I think, are all having a really good time.

And it's been hugely successful; I see it's been extended again. Yeah, we have huge demand for tickets so we've extended until December 21st.

What's after that? Next up is a new play by Dan LeFranc directed by Anne Kauffman. Annie directed The Thugs. So that starts on January 15th. We're just working on the design and casting and everything. It's a very different kind of play. And after that we're working with Nature Theater of Oklahoma on a piece called Rambo Solo.

Is that actually a solo performance? Yep. We're producing it. We worked with them last year on No Dice that we did off site in a non-theater space. This is a one-person show and this is going to be at our space. We're actually reconfiguring the entire space. We're taking out all the seats and reversing the configuration. And there's going to be a catwalk. The space is going to be very different. I think people are going to enter through the dressing rooms. They're basically flipping the stage. That's going to be in March and those two projects are certainly very different.