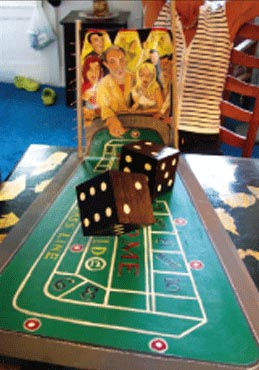 According to The Villager, all artist Arnie Charnick wants to do is transform that cube in Astor Place – a kinetic sculpture called “The Alamo” – into a giant craps table. Charnick’s vision would temporarily turn the big cube into a die with white Velcro dots, drop in a second giant die next to it, paint the Astor place island like a craps table, add some manhole-sized chips (one of which would actually be a manhole!) and string a 17-foot-high banner between two lampposts, depicting a casino-like scene. Clever, right? Not to the agent who represents Tony Rosenthal, the artist who made “The Alamo”:

Can you go into the Museum of Modern Art and draw on a Picasso painting? I don’t think so. What is the point of allowing someone else to capitalize on Mr. Rosenthal’s important and famous Work of Art by letting someone else modify or change or revise this Sculpture? Why not be an Artist, and create your own Art? If you want to be famous, rape Britney Spears and you’ll get in the newspaper.

Jeez, what a joy-kill. Charnick – who painted the mural in Veselka that will soon disappear – isn’t having much luck with the local community board either. The Villager reports that some scolds think Charnick’s twist on the installation would encourage gambling – in its current form, Rosenthal’s sculpture merely promotes dizziness and idle loafing. But sometimes it wears a chapeau.

Photo of a model of Arnie Charnick’s proposed public artwork courtesy The Villager.

#alamo
#astor place
#casino
#craps table
Do you know the scoop? Comment below or Send us a Tip