Artist Shepard Fairey Surfaces In DUMBO: "I'm One Of The Good Guys"

Shepard Fairey, the groundbreaking graphic designer/illustrator//Urban Outfitter and artist behind the iconic Obama Hope poster, is back in New York. We spotted him in DUMBO yesterday near the York Street F stop putting up a new mural, and he took a break to chat with us.

His new piece, now complete, is for the Wooster Collective's 10th Anniversary show. The Wooster Collective is a website that was founded in 2003 and has been influential in covering the global street art boom. Fairey is based on L.A., but has been visiting NYC for over 20 years.

Why DUMBO? "This is a busy spot because of the subway stop and I've always liked this neighborhood—it's most ideal because it's public property and theoretically owned by the people," Fairey told us. "So I feel like that's the space where it makes the most sense to have art rather than having to go through [a private owner or the city]. It's kind of an awesome irony that I've been arrested in New York multiple times and then I'm getting a city wall. The only downside of doing something where you have to have city approval is that you can't make the content too controversial."

Over the course of the interview it becomes clear that Fairey's world is about navigating compromises and choosing his battles. 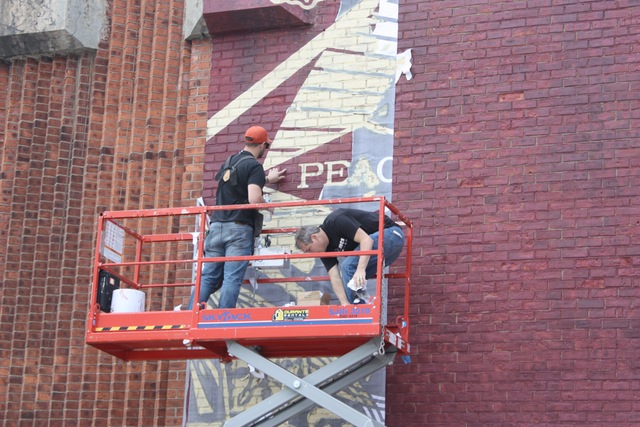 What about the legality of his work, though? Does it feel less authentic to him when it's government-approved? His critics would probably suggest that sanctioned street art is a misnomer, if not a perversion of the form itself. "Legal vs. Illegal? To me, street art was always about finding a democratically accessible form for art," Fairey said. "It wasn't about whether it was legal or illegal. In pretty much everything I do I push that idea that if you need to go against the social norm or bend or break the rules to do what you think is right then you need to have the courage to do that. But it's not also just about saying 'Fuck you, I'm an antagonist!' Because that's idiotic.

"Over the 24 years I've been doing this I've been arrested 16 times. It's not that I need to prove that I'm willing to take risks to do what I do. The idea of being able to do something that's more permanent on a larger scale, that's more artistically challenging and I think more powerful as an end result—I think I've gotten to where I really enjoy that.

"I still do other stuff too. I do art shows, I paint murals, I do street art, I design album packages, I make t-shirts. I'm just trying to get my stuff out there. A lot of these categories make people feel really trapped. And I'm not just gonna fall into the pressure to do that—'Oh, I'm just a street artist.' It's still a really important part of what I do because it's so democratic." 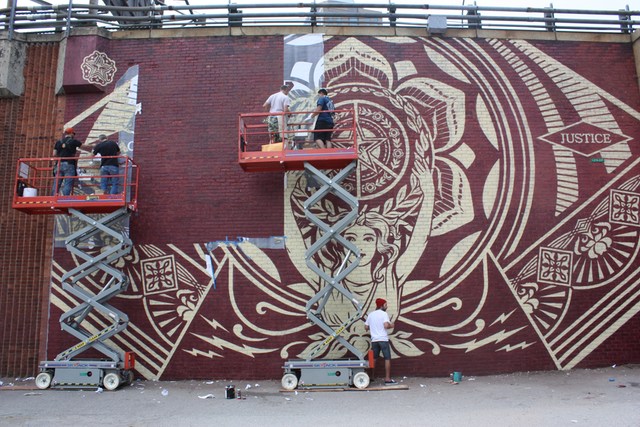 Since he has been coming here in 1990, DUMBO has obviously changed. "I used to come over here and bomb in the late '90s and it was tumbleweeds. There was nothing going on over here. But everyone always goes 'I loved SoHo in the '90s. I loved Bowery when CBGB's was there.' There's always that moment where a place goes from being totally crappy to having a bunch of artists and cool bars and gallery spaces and then it gets too expensive and it gets yuppified.

"I think [DUMBO] is in that transitional phase, but it's a cool neighborhood. There's no point in having a sort of romantic attachment to a neighborhood the way it was in a specific moment of time because everything is in flux. Shit's always changing—if you're bummed about it go pioneer the next neighborhood."

Fairey is obviously a controversial figure: underground street artist turned clothing designer, Fair Use advocate, friend to Occupy, passionately anti-Bush, advertiser, skateboarder, corporate bedfellow, gallery star, celebrity. Some see him as a sell-out, but Fairey doesn't claim to be a street-art purist. "This is me taking a very ethical approach to the system we live in—capitalism— and trying to do something constructive. The idea that your art is no longer valid if you can make a living from it is really lame. I'll qualify that by saying that I do understand that since almost everything in this world is corrupt then the idea that doing art for the right reasons seems very important for it to be pure. But the way I worked is the way I've always worked."

As for Obey, his paradoxical-art-as-mass-clothing-line brand, Fairey says he's always made clothes. "I've made shirts since the very beginning since I come from skateboarding and punk-rock. That was the uniform." 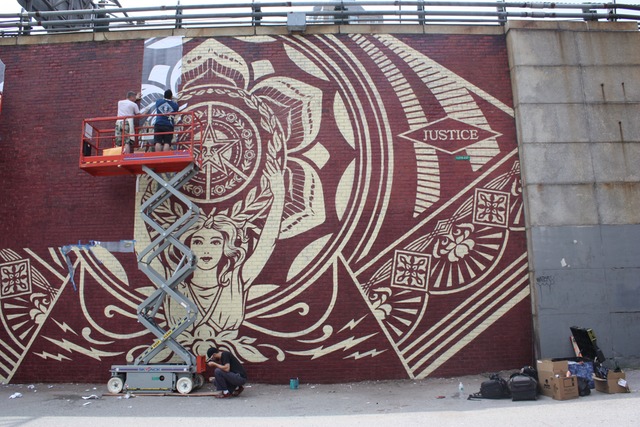 The Obama Hope poster is Fairey's legacy in many respects. It was plastered all over the country. It helped galvanize an electorate and inspire voters. It had a dramatic impact on Obama's image, for the better. It was potent propaganda. But Fairey is conflicted about the Obama administration, particularly the revelations about the government's counter-terrorism surveillance program PRISM. "There's a whole section in my book about surveillance," he explains. "I've been anti-Big Brother since I read 1984 in high school. I'm super bummed on Obama for, if not initiating it, continuing the program which I think started under Bush. I'm bummed on him for the drones. A lot of people made Hope parodies against the PRISM program and I was all for that. Politicians need to be accountable and there needs to be transparency."

What kind of transparency, and what it looks like, is another matter. There is a populism to Fairey's appeal that mobilizes (and unifies) his critics so effectively, while making his message and work so massively digestible. The work he is doing, he believes, certainly has a place in a political conversation. "I expected [wiretapping, The Patriot Act] from Bush," Fairey says. "There are plenty of things I agree on with Obama—gay marriage, attempting to shut down Guantanamo Bay, pushing green energy as part of the government's investment program—all those things I'm for. But Obama's been disappointing on a lot of fronts for me.

"But even when I did the Hope poster it wasn't me thinking that Obama was going to be a miracle worker or perfect. I basically subverted my own Hope poster for the Occupy movement because mainstream politics and the way they currently function are not gonna really create the greatest good for the greatest number of people." After a long digression on the media portrayal of the Occupy movement and the value of "external" political movements, we encounter a typical refrain: "But, you know, it's all very complicated."

Complicated indeed, but is there something too neat and reductive about all this? Obama has dragged his feet on the Keystone XL pipeline and Guantanamo. "Big Brother" is a tired rhetorical device; an all-seeing eye isn't how the modern surveillance state functions, so to reduce it to 1984 terms is to gloss over its current complexity. 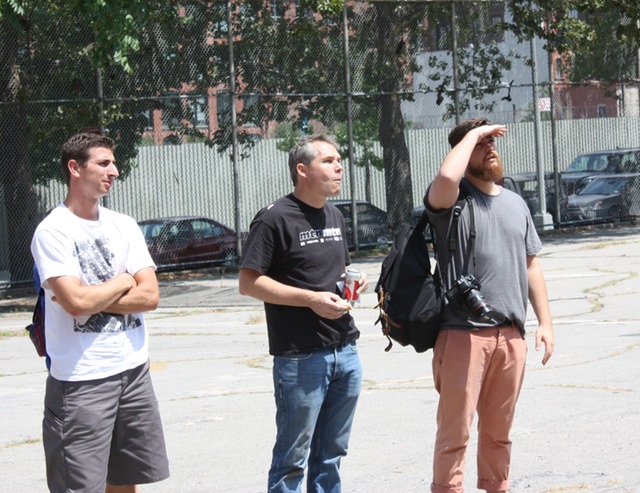 Fairey's new piece is a large mural with "Peace" on the left and "Justice" on the right, so we couldn't help but think of Trayvon Martin. Those two words were prominent in rallies in New York and across the country ("No Justice, No Peace," "Justice for Trayvon"). "I've incorporated peace and justice in several of my images over the past few years," Fairey told us. "Having to do something that the city is going to approve and making it pretty with these floral motifs but incorporating the 'Peace' and 'Justice' in there was a way to subtly get to people's conscious and consciousness. 'Justice' especially is a very open-ended word, but if you think about it and the Trayvon case and you feel like justice wasn't really done— which is what I think—it's just harder to sweep it under the rug."

Fairey is earnest and eager. He is aware of himself and his persona (self-aware connotes a kind of calculation and performance that doesn't seem to be a part of his personality). Thus, he is aware of the criticisms leveled against him. "It does hurt my feelings," he admits. "The more I've paid attention to what goes on behind the scenes—backroom dealing with a lot of big corporations, people like the Koch brothers who own fossil fuel companies and really try to effect legislation so that their business are more profitable at the expense of the environment and people's health... Everything I do is driven by my belief in art and democratizing art. It costs me a lot of money to do the stuff that I do. I don't apologize for putting my graphics on T-shirts and selling them and using that to fund my street art and give to charities...It's disappointing that people project a certain thing onto me while they do not scrutinize the really evil people. I'm one of the good guys."

He's right. But a criticism of Fairey isn't one taken away from the Koch brothers. The Koch brothers are disgustingly wealthy conservatives running one of the largest and most diversified private corporations in the world; Fairey is an artist. The standards to which he and his work is held should are different. How are we defining art here? Does art need a certain amount of institutional credibility (museums) or market value? How are we defining success? His "Us against Them" mentality isn't terrible—and is certainly in keeping with his origins and art—but can detrimentally work as insulation from more valid criticism. That said, those ubiquitous origins make him an easy target. Ask him if he cares. "I'd much rather be the one creating things that people react to than be the one just sitting back reacting, too scared to make anything." 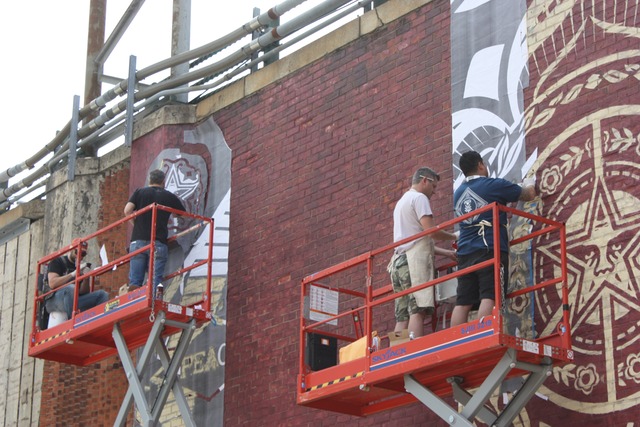 Street art is for and of the streets. It has always been explicitly political because it was outside a culturally sanctioned/protected art space. It is illegal, unwanted (by some), amateur and frantic in an art community that has always privileged training, discipline, history, craft, precision, and value. It's very presence is more radical because graffiti, strictly speaking, is less easily commodified. It's quite hard to rip a piece off a wall (but not impossible), and that upsets the economic balance of an art market that hinges on Original Work. He doesn't call himself a street artist exclusively, and has clearly grown out of that phase of his life and career. He is an artist now, for better or for worse. He has to navigate a new kind of politics from a new position and that has to be assessed accordingly.

When we first got there, a man walking through the park area was yelling about how graffiti needs to be recognized as a legitimate art form. "I don't know what he's trying to say," said one of Fairey's assistants, "this isn't even graffiti." 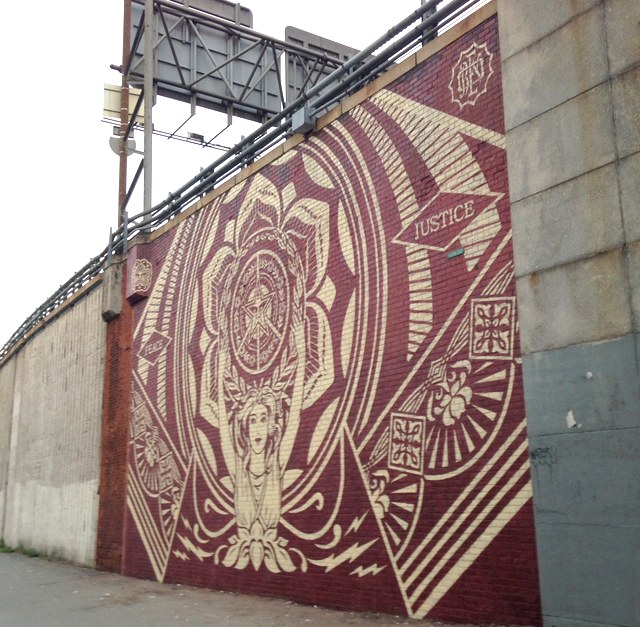 A pop-up gallery at 525 West 22nd Street will play host to the 10 Years of Wooster Collective show for 2 weeks (August 7th-24th) where some of Fairey's work will be displayed. The mural can be found by the York Street F stop in DUMBO as part of the DUMBO Walls project, sponsored by the DUMBO Improvement District and Two Trees Management Co in partnership with the NYC DOT Urban Art Program and Jonathan LeVine Gallery. Other artists participating in DUMBO Walls include Eltono, Stefan Sagmeister, Yuko Shizimu, CAM, DALeast, Faith47 and MOMO.

#shepard fairey
#street art
#original
Do you know the scoop? Comment below or Send us a Tip