That old building on the corner of Bowery and Spring Street can be identified by a lot of things—its address: 190 Bowery; its history: the old Germania Bank building; but to the casual passerby it's mostly eye-catching for its graffiti-laden exterior.

The building, which has looked abandoned for decades, thanks in part to that graffiti, has actually belonged to Jay Maisel since the 1960s. The photographer put the 72-room place on the market this year, however, and it will likely turn condo soon. In response to the upcoming transformation, Eric Rieger, aka HOTTEA, put this piece up on the side of the building, and tells us: 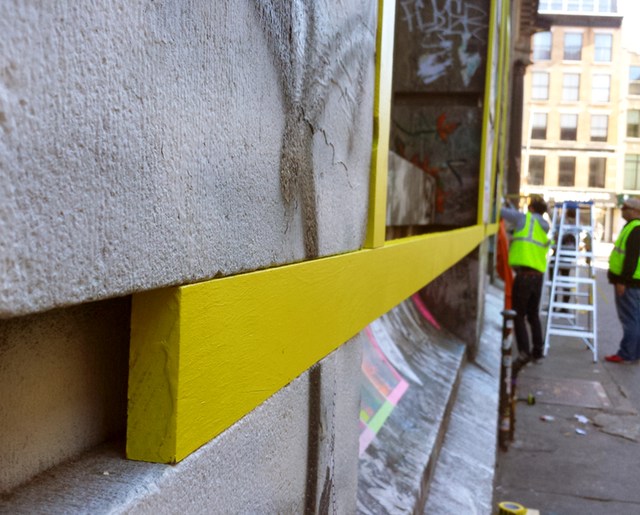 "I wanted to create a piece on this building because of how iconic it is to New York City. Also, because it was recently purchased and this once canvas for graffiti writers and street artists will no longer be accessible. All over the country gentrification is taking place and NYC is no stranger to that. It is something that I see in every city I travel to. There have been so many historic buildings that have been lost to this and to that I say 'UUGGHH.'

"This piece is not only a statement of the cultural shift in NYC but to create an installation that does not damage the building and using the architecture to exist. All of the lettering is placed into indents that are in the walls. These indents form a grid in which I created a type face to spell out the word 'UUGGHH.' I have never seen this method of typography used before. All one would have to do to remove this piece is simply give it a tug."

Unclear if anyone has taken it down yet, but you can see it all in the below video: