Artist Presumed to Have Killed Himself After Girlfriend's Suicide 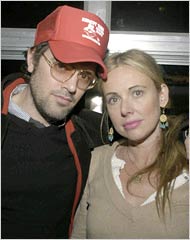 Jeremy Blake, an artist whose works have been shown at the Whitney and on Times Square's Jumbotron, is presumed to have killed himself by walking into the ocean at the Rockaways on Tuesday. On July 10, Blake discovered the body of his girlfriend, filmmaker Theresa Duncan, in their East Village apartment; he had planned to attend Duncan's memorial service, which is being held today.

According to the NY Times reports that Blake was seen "taking off his clothes and then walking into the water at Beach 102nd Street" Tuesday night and was not seen coming out. A wallet and a suicide note were found amongst his clothes, and police divers have not found Blake's body.

Duncan and Blake were both artists: Duncan, who had a blog, The Wit of the Staircase, developed video games and made films, while Blake created lush paintings, photographs, and digital animations that "mix visual narrative with abstract forms, as Modern Art Notes explains. Blake was represented by the gallery Kinz, Tillou + Feigen (more about his work here), and Lance Kinz told the Daily News, "They were extremely intelligent, talented, creative, ambitious people...As a couple, they were extremely close, very much in love. They worshiped each other, and collaborated on projects together, as if they were one."

The NY Times' art critic Roberta Smith said that Blake's work had "given the stream-of-consciousness narrative, so long a part of modern literature, a time-based visual equivalent." In 2003, Blake's work Cowboy Waltz was shown as part of Creative Time's 59th Minute series, where artists' videos were show on the big Panasonic TV in Times Square (it was recently replayed as part of Creative Time's 59th Minute retrospective). Blake's work can also be seen in Punch Drunk Love, where his animation is used to punctuate scenes (see some clips here).

Photograph of Blake and Duncan from PatrickMcMullan.com; still from one of Blake's sequences in Punch Drunk Love