Artist Duke Riley Is Doing Something Crazy With 2,000 Pigeons On The Brooklyn Waterfront New Yorkers take a kind of perverse pride in never looking up. Not in a figurative sense, of course: we are, after all, as optimistic as anyone else. (Who else but die-hard optimists would willingly live in so unforgiving a city?) But when it comes to actually, physically looking up, most of our gazes rarely rise above the ankles of our fellow commuters. The Boston-born, New York-based artist Duke Riley is going to change that.

Crafting a public art project that is literally sky-high, every weekend this spring (from early May through mid-June) Riley will release thousands of pigeons from a decommissioned naval ship at the Brooklyn Navy Yard. He will then orchestrate a series of "performances" as the birds flit and soar en masse above the East River. As the sun sets, the massive flock of trained flyers—each equipped with a leg band sporting a tiny LED light—will create what Riley has likened to a series of undulating constellations gliding through the dusk, before returning to a dozen specially designed pigeon coops built atop the ship's gun-metal gray decks. 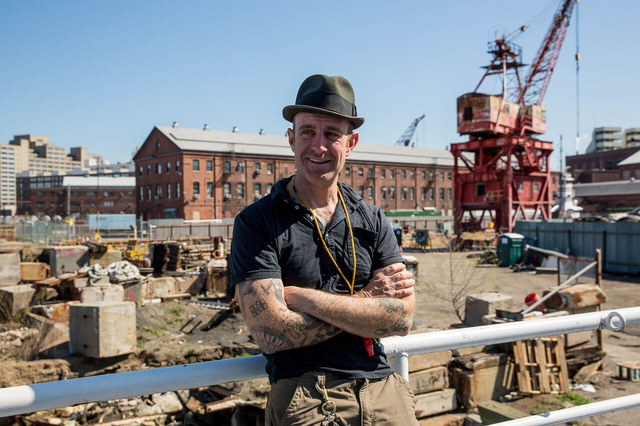 "This is a really ambitious project," Riley told me, discussing his latest show, "and more than a little crazy." It was a cloudless, warm April afternoon, and the 43-year-old artist was taking a break from the show's preparations, including the training and the constant care of 2,000 pigeons (for which he has a team of volunteers and assistants helping). We were just weeks away from the rapidly approaching debut of "Fly By Night," commissioned by the public arts non-profit Creative Time, but despite the scope and complexity of the endeavor, Riley seemed pretty calm about it all. He and I were sitting in the shade on the deck of the Baylander, a snug old vessel that saw action in Vietnam and is berthed, for the time being, at the Navy Yard.

At 131 feet long, with a beam of less than 40 feet, the ship is a pipsqueak compared to its colossal battleship and destroyer cousins. Still, "the Navy's smallest aircraft carrier" was a reliable workhorse in its day, with more than 120,000 error-free chopper landings on its flight deck during its long run as a helicopter-pilot training ship based in Pensacola, Florida.

"You know," Riley says, "there's no art without risk, and putting this particular project together has been risky as hell." He laughs, then, and looks out over the waters of Brooklyn's Wallabout Bay. It's quiet on the boat—with the sun beating down, the pigeons cooing behind us, the waves lapping against the Baylander, it's easy to imagine we're on a ship in a far different harbor, a hundred miles from any city.

"I have to give the folks at Creative Time credit," he says, wrenching his gaze away from the waters of the bay and, beyond, the great tidal strait known as the East River. "When some guy says he has an idea that he wants to train a few thousand birds, and let them go flying around over the East River, and not only is he going to put little lights on their legs but all the birds are going to come back when he tells them to, in the dark, most people would probably scratch their heads and say, 'Uh huh. Good luck.' But Creative Time's reaction was more like, 'Sounds great. Let's do it.' That's what I call risk-taking, man."

Anyone familiar with Riley's work over the past few decades knows that risk is central to his aesthetic. "It's definitely a motivating force in a lot of stuff that I do," he says. "I do thrive off of conflict to some degree. But I think that sort of approach is an important part of what makes something art. You need to be pushing boundaries, and if you're not then you're probably making something besides art. You're making a commercial product that's meant to be sold."

Far from trying to position himself as "marketable," whatever that term might mean in today's money-mad art world, Riley has instead pursued projects that reflect his passions: the uneasy nexus of the natural and manmade world; the often lawless or, at least, legally sketchy realm of the urban waterfront; nautical history; and, quite often, his beloved birds. (He has kept and flown pigeons for years, in New York, Providence, and elsewhere.) 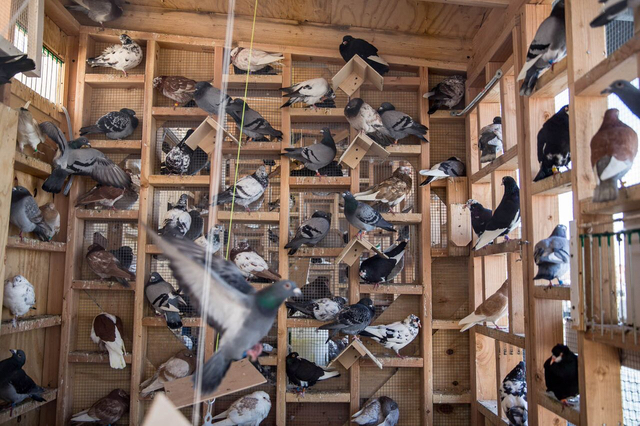 In 2007, for example, he spent months building a small, wooden, one-man submarine that he modeled on America's first sub: an oaken, spherical contraption called the Turtle, which bobbed about New York Harbor in search of British prey during the Revolutionary War. Riley and his craft, dubbed the Acorn, made it to within a few hundred yards of the Queen Mary 2 before the NYPD and the Coast Guard impounded the vessel and issued a handful of citations to its shirtless captain.

Then there was the memorably damp night in 2009 when Riley and a few hundred toga-clad friends and volunteers formed teams representing four New York museums and staged a mock, Roman-themed "naval battle"—with tomatoes as projectiles—in the Flushing Meadows-Corona Park reflecting pool. That event's title: "Those About to Die Salute You."

Or his 2013 project, "Trading With the Enemy," for which Riley trained a flock of homing pigeons—half of them "smugglers," the other half "documentarians"—to fly from Havana to Key West, the former carrying tiny Cuban cigars to the States while the latter were outfitted with cameras to record the flock's journey.

"Fly By Night" incorporates a slew of themes that have always inspired and fascinated Riley— Brooklyn's Wallabout Bay, for instance, has witnessed as much history, military and otherwise, as any location in New York—while also allowing the artist a chance to indulge a private desire in a very public way. As Meredith Johnson, the curator on the project, told me: "This will come across like a sound bite, but early on Duke mentioned that New York had given him so much, and this was a chance for him to give something unique and, he hoped, something beautiful back to New York and to New Yorkers."

She's right. It does come across like a sound bite. But after spending even a short time with Riley one realizes that it also sounds like something he would say—and he'd say it without making it sound inauthentic, or sappy. He might be an artist who deals in some pretty esoteric concepts and infuses his work with a kind of punk-inflected playfulness and humor, but there's a flinty, old-school quality to the man, too. It's far easier to imagine him as a foremast hand—tattooed, barefoot—aboard a ship like Ahab's Pequod than schmoozing in an art gallery. Salt water, as the saying goes, clearly runs in his veins. "I've been in New York for 20 years," he says, "and I'm on the river all the time. In the summertime, I'm rarely on land. Last summer I spent maybe three nights in my apartment, and the rest of the time I was sleeping on a boat." 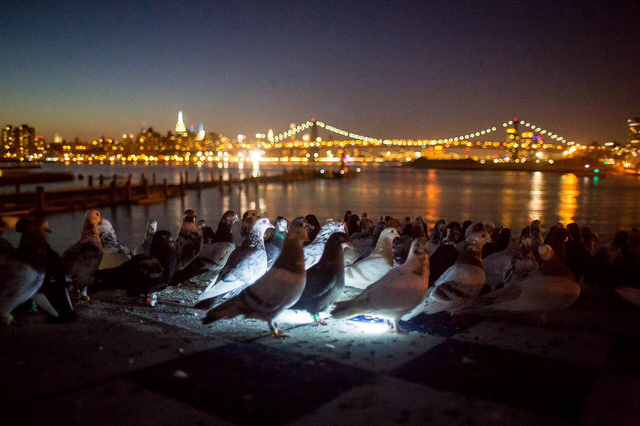 Riley's hopes for "Fly By Night" are, in some ways, quite grand, yet also manifestly down-to-earth.

"I've done projects in the past, like creating posters for the MTA, that were mainly for people in New York to enjoy and maybe make their commute a little more enjoyable," he says. "This project, while obviously far more complicated than making subway posters, falls into that category, too. We're trying to create something beautiful. Maybe a couple comes down here on a date, it's a little chilly that night and they get to cuddle beneath these floating constellations.

"But I also hope that a few days later, when someone who came to the show is walking around the city, they'll think about pigeons differently, or they'll think about the waterfront and what these places have meant to generations of New Yorkers. I'll be happy if this show inspires people to re-imagine their relationship to their city and their neighbors."

"And," he says through a crooked grin, squinting at the waves of Wallabout Bay, "maybe they'll spend less time staring at their phones and more time appreciating the world around us."

Duke Riley, Creative Time, and the Brooklyn Navy Yard present "Fly By Night" every weekend from May 7th through June 12th. Limited seating is still available for select performances.

Ben Cosgrove has worked as a writer and editor, online and off, since the mid-1990s, covering arts and culture, sports, and science for Salon, Deadspin (the Stacks), the Daily Beast, the Washington Post, the Columbia Journalism Review and others. He lives in Brooklyn.

#art
#brooklyn navy yard
#duke riley
#fly by night
#pigeons
#longform
#original
Do you know the scoop? Comment below or Send us a Tip