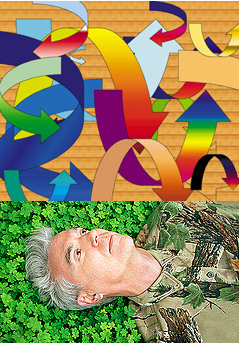 Did contemporary art and music come together for the first time in New York? The holy (or unholy -- if you're not a Velvet Underground fan) union can be traced back to, where else, Andy Warhol's Factory scene. So why is the Sympathy for the Devil: Art and Rock and Roll Since 1967 exhibit being housed all the way in Chicago?

The NY Times takes a look at the Museum of Contemporary Art (Chicago) show, which opens this weekend, and traces the history of the two art forms and the tangled world of artists, rockers and art rockers. The geographically-arranged look at how contemporary art and rock have collaborated starts out in New York. So let's textually get down to the history of our city's art-music scene. Here's a snapshot:

Laurie Anderson once composed a violin piece based on Sol LeWitt’s mathematical drawings, recalled the New York world of artists and musicians in the early 1970s, when Minimalism ruled the avant-garde. “The people who did the brainy rock did it at the Kitchen. CBGB’s had the sweaty, soul rock.”

While Ms. Anderson’s career was flourishing, David Byrne was ricocheting from painting to photography to video to conceptual art, first at the Rhode Island School of Design and then at the Maryland Institute College of Art. Abandoning art school, he moved to New York in 1972.

At the time he had no musical ambitions, Mr. Byrne, the former lead singer of Talking Heads, said, “When I came to the city, I wanted to show in galleries.” But Lee Ranaldo, a singer and guitarist with Sonic Youth, recalls that the art world back then was cordoned off. “It was easier to get an audition night at CBGB’s than it was to get a show in a gallery,” he said. This exactly mirrored Mr. Byrne’s experience. “We had this band,” he said, “and eventually we wanted to play a set. We auditioned at CBGB’s.”

Lower Manhattan served as a post-graduate art school of sorts, with practically every musician-to-be armed with a visual arts degree. Collectively and alone they discovered that that art could be sound, music, film...whatever they could create. They found themselves, and inspiration, at lectures, galleries and venues alike -- which makes one wonder why a bulk of today's downtown musicians are often only found on barstools. What does Sonic Youth's Lee Ranaldo have to say about this, and the influx of more "hip" shows at galleries (see: Summer of Love)? He tells the Times: “I think museums and galleries are hungry for young bodies. Music is something very visceral that young people respond to. It’s a much more immediate calling card than art. Now there are all of these amazing things you can do with the digital process. It’s a very exciting time to be a young artist.”

Last year Paper's Carlo McCormick explored this same time and place with his show, The Downtown Show: The New York Art Scene, 1974–1984. And today you can catch up with David Byrne through his blog, recently he wrote about his visits to the Chelsea galleries. Take a visit there yourself, as it's more representative of where the scene is today, instead of a retrospective on what it once was.

Photo of David Byrne and one of the still slide's from his "Envisioning Emotional Epistemological Information" book.