Armrests Are For Vulgarians, And Other Things I Learned In Etiquette Class

When I was in the fifth grade, my parents bought me A Smart Girl's Guide To Manners, a "comprehensive manners guide" for budding tweens published by the company that made American Girl dolls. I decided upon receipt that this book would be my Etiquette Bible, its 128 illustrated pages responsible for transforming me from a bumbling baby elephant human to an elegant lady who knows how to dine out without losing her napkin. I read the guide from cover to cover in an hour, then immediately lost it and forgot everything in it.

Over a decade and a half later, my egregious table manners and I found ourselves at an intimate "Group Social Etiquette" course at a private club in Midtown, hosted by consultancy group Beaumont Etiquette. I was invited to attend as a guest of company founder Myka Meier, who claimed she reached out because of Gothamist's subway etiquette coverage but had probably heard that I once ate caviar with my hands.

The thing about etiquette is that while it sounds like something reserved only for people who wear Philip Treacy hats, being able to comport yourself appropriately is actually pretty helpful when navigating tricky social and business situations. I walked into Meier's class expecting to learn how to curtsy and balance books on my head, and instead I learned how not to flash people while climbing out of a taxi cab.

Meier, who used to work in public relations, managed to turn her lifelong fascination with etiquette into a career, starting up Beaumont about a year ago. She's no stranger to diligent decorum, having trained with a former member of the Queen of England's Royal Household, which I can only imagine is exactly like everything that happens in The Princess Diaries. And some of the lessons she imparted were a little too Duchess Kate-esque for this blogger—I can't imagine I'll ever need to know how to glide down stairs, for instance, nor will I ever use a "Butler Stick" to determine the proper distance between plates at a dinner party.

Still, etiquette's not nearly as affected as it seems. "Etiquette is about being thoughtful, gracious and kind," Meier, who teaches classes to adults and non-bumbling baby elephant children, says. "It's not pretentious." It's certainly good to know how to network at a business event without offending the higher ups, or the secrets to a giving a proper handshake, or how to enter a room without knocking over someone's antique lamp. Here are some tips I picked up:

Meier did not address basic NYC-centric etiquette, like whether manspreading is a scourge on society or if people should be banned from donning flip flops on the sidewalk. Still, if I ever find myself somewhere surrounded by people wearing suits, I'll know how to greet them, and perhaps I'll even be able to glide down a staircase one day, even without my beloved American Girl manners guide. As you can see, I took plenty of manic notes for future reference! 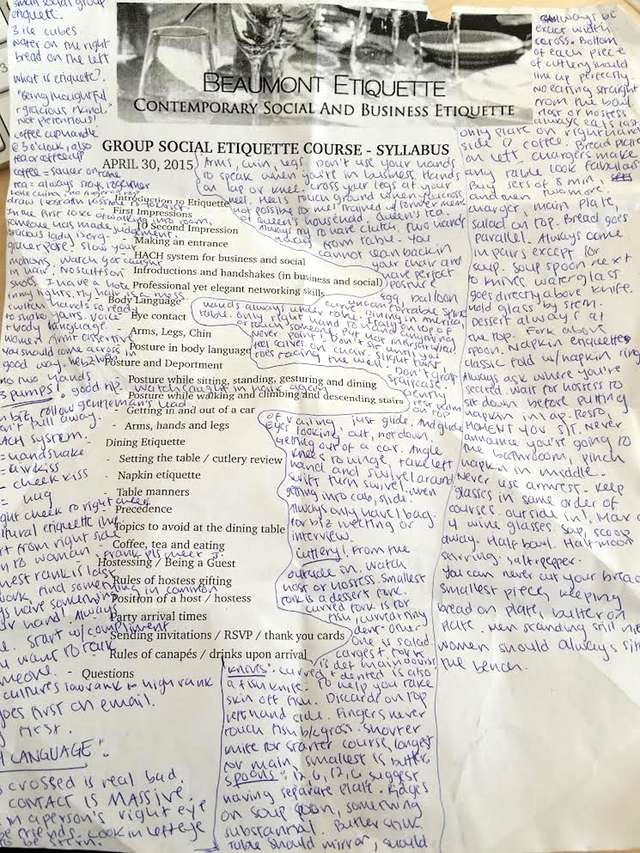 #beaumont etiquette
#etiquette
#myka meier
#original
Do you know the scoop? Comment below or Send us a Tip