Are You Outraged By Mick Jagger's Poorly-Worded Sandy Joke?

Despite the fact that they had the shortest set of the many entertainers at last night's benefit 12-12-12: The Concert For Sandy Relief at MSG, it seems The Rolling Stones were able to stir up more controversy than Kanye West's skirt or Roger Daltrey's ageless bronze chest. Outraged articles have been popping up all over the web today over a joke Mick Jagger made during the show—and it had nothing to do with his "Moves Like Jagger" remarks. " Before jumping into "Jumpin' Jack Flash," he said: “But I’ve got to say, if it rains in London, you’ve got to come and help us, OK?” 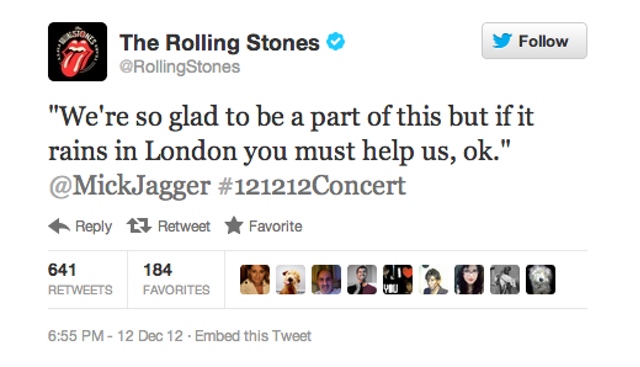 Of course, nothing was helped when the "joke" was then Tweeted out on the Stones account (it was subsequently deleted). We'll confess that we didn't immediately pick up on the controversial element of the failed joke at the time—it is and was pretty apparent that he didn't mean anything insulting by it (as their Tweeting it out also attests).

Certainly, it wasn't a particularly good joke—his other one about aging rockers (“This has got to be the largest collection of old English musicians ever assembled in Madison Square Garden”) was much better (and more accurate). So if Mick wants to get humorous, we can all agree that he should really stick to doing the rooster strut, running rock and roll fantasy camps, and maybe making the occasional pointed SNL cameo.

#12/12/12
#bad jokes
#benefit concert
#hurricane sandy
#jokes
#mick jagger
#rolling stones
Do you know the scoop? Comment below or Send us a Tip