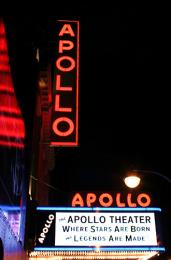 American Idol has been on the decline ever since Kelly Clarkson stepped off the stage. It's understandable, the first time is always more exciting -- and c'mon, one can only take so much of Paula's craziness, Simon's snarkiness and Randy Jackson's what's up dawg's.

USA Today is reporting that 2007's Idols Live Tour (who knew) has plenty of empty seats. So where does a New Yorker go to hear a new (Sanjaya-less) talent pool? Amateur Night at The Apollo!

"Amateur Night" has been giving civilians a chance to show their stuff since 1934, and the theater crew will spend this weekend getting everything ready for the start of a new season next Wednesday.

"Amateur Night at the Apollo" has never had the production budget of "American Idol," but it has survived for most of the same reasons. In fact, many of the principles that have worked so well for "Idol" were applied decades earlier at 253 W. 125th St.

The show is entertaining (and not in a "reality tv" type of way), it has a tough quotient that would would make Simon Cowell cower, and it has led to big success for many who have taken the stage. Michael Jackson, James Brown, Sarah Vaughan, Leslie Uggams, Wilson Pickett, Dionne Warwick, Pearl Bailey and Luther Vandross.

Advancing with its age (Amateur Night started in 1934), over recent years rap and Latin music have been the focus. This year's kickoff was hosted by rapper Doug E. Fresh who, incidentally, is opening a Chicken and Waffles restaurant nearby. Buy tickets for a regular show here for $15 (the event is every Wednesday -- and you can even catch it on TV).