Anybody Want To Buy A Chrysler Building?

Hello, are you in the market for an unwieldy purchase? What about a very large and very famous skyscraper, like for example the Chrysler Building? Well! What remarkable timing you have: According to the Wall Street Journal, it just hit the market. My experience in the hundreds-of-millions-to-billions-of-dollars listing arena is non-existent, so I cannot accurately forecast how much time you might have to close this deal. Probably you want to move quickly, though, because this is the Chrysler Building, for (heh) chrys-sakes!

Anyway, the Journal reports that the tower's majority owners, the Abu Dhabi Investment Council, spent $800 million on a 90% stake in the property in 2008, but value estimates now "vary widely." Although the Chrysler Building has reportedly lost appeal in the eyes of potential tenants—who would apparently prefer to exist in giant floating fishbowls equipped with high-end fitness centers so they never have to leave, and also to avoid the high cost of maintenance associated with a 90-year-old landmark—it remains the Chrysler Building: Whoever buys it gets to say things like, "Welcome to my home, the Chrysler Building, no I don't rent why do you ask?" And, "I own the Chrysler Building." However large a pain in the ass, however outmoded its amenities might be from the standpoint of modern office design, the prestige of purchasing one of New York City's most historic and recognizable buildings will doubtless intrigue some extremely rich braggart.

Interested? Let me tell you a bit more about our prize listing: Constructed between 1928 and 1930 by Brooklyn architect William Van Alen, this art deco jewel formerly housed the Chrysler headquarters, which is why it boasts eagle and radiator cap adornments. (Chrysler automobiles used to feature eagle ornaments on their hoods, blah blah blah cars.) Most notable, at least to my mind, is the fact that no one died during the building process, which significantly reduces the odds that you're buying a haunting. 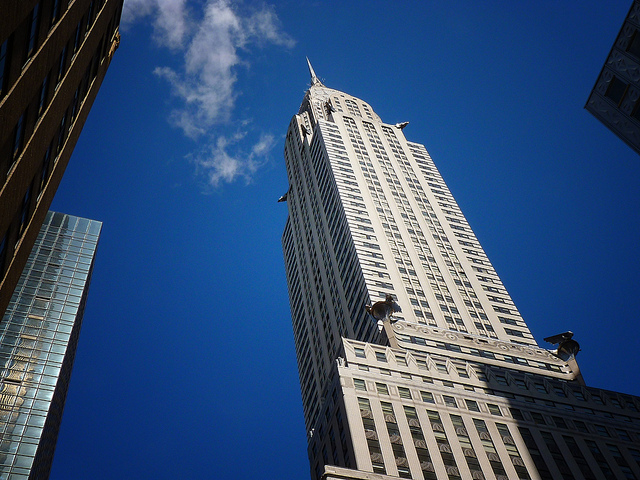 The Chrysler Building is not on Zillow, so I don't have a listing price to report. (Although I imagine the rule "if you have to ask, you can't afford it" applies here.) But please consider, you'd have unlimited access to the skyscraper's cool spire (I would think?) and probably, an easier time securing a coveted appointment at the city's favorite sky dentist.

#chrysler building
#deals
#landmark
#real estate
#skyscrapers
Do you know the scoop? Comment below or Send us a Tip