Antonio Pierce Tackles the King of All Media 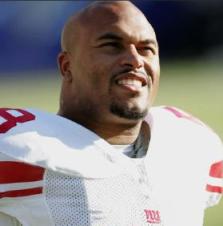 The latest craze for professional athletes is to intern in media. Ranger forward Sean Avery is headed to intern at Vogue this summer, while Giants linebacker Antonio Pierce spent today interning for the Howard Stern show. Bababooey!

Stern and his crew put the pro football player through the paces: Answering phones (many with crank calls), towel snapping, trying to teach some of the producers how to throw a football and discussing his fiancee. Pierce is interested in a broadcasting career, hence the one-day stint/stunt, which has actually been extended through the rest of the week because Pierce was having such a good time.

MarksFriggin, which has a detailed account of today's show, though reports there's a little bit of discontent: Some of the show's real interns are saying "Antonio is getting more attention and learning more on his first day than they've learned the whole semester."

Fun fact: Pierce revealed that while he was invited to the White House last week, he decided to take his kids to the Baltimore Aquarium instead.

#Antonio Pierce
#howard stern
#intern
#ny giants
Do you know the scoop? Comment below or Send us a Tip