Stage, film and TV actor Anthony Rapp revealed in an interview that, when he was 14 years old, Kevin Spacey pinned him on a bed and "tried to get with me sexually."

The scores of women speaking out about movie producer Harvey Weinstein's alleged sexual harassment and assault—plus the others coming forward about sexual assault in the entertainment business—encouraged Rapp to discuss the decades-old experience. In the interview with Buzzfeed, Rapp said, "And not to simply air a grievance, but to try to shine another light on the decades of behavior that have been allowed to continue because many people, including myself, being silent. … I'm feeling really awake to the moment that we're living in, and I'm hopeful that this can make a difference."

In 1986, Rapp was a 14-year-old acting on Broadway in a production of George Furth's Precious Sons, while Spacey, 26 at the time, was in a Broadway production of Long Day's Journey Into Night. Rapp said that he had been meeting other actors in various gatherings after the show and, one day, Spacey invited him and Rapp's 17-year-old friend from his Illinois hometown to go to the Limelight. He wasn't offered alcohol; Rapp recalled, "It was just a fun night just talking and hanging out."

[A]t some point, Spacey invited him to attend a party he was hosting a few days later at his Manhattan apartment.

He went, gladly, and alone. Rapp said he honestly cannot recall what he told his mother — who died from cancer in 1997 — about the party, but he stressed that the idea of him attending a party held by an adult Broadway actor did not seem like a cause for concern. "I imagine that I might be opening my poor late mother up to some criticisms for how she parented, but, you know, it was a different era," he said. "I went to work by myself. I would walk to the subway, and go to the theater by myself.”

When he got to the party, it was all adults, so Rapp said he "was quickly kind of bored" and went to a bedroom to watch TV.

At some point, Rapp said he turned to see Spacey standing at the bedroom door. And that's when he first realized that everyone else had left the party. They were alone.

“My memory was that I thought, Oh, everybody's gone. Well, yeah, I should probably go home,” Rapp said. Spacey, he recalled, “sort of stood in the doorway, kind of swaying. My impression when he came in the room was that he was drunk.” Rapp doesn't remember Spacey saying anything to him. Instead, Rapp said, “He picked me up like a groom picks up the bride over the threshold. But I don't, like, squirm away initially, because I'm like, 'What's going on?' And then he lays down on top of me.”

“He was trying to seduce me,” Rapp said. “I don't know if I would have used that language. But I was aware that he was trying to get with me sexually.”

Rapp recalled this all happening — Spacey appearing at the door, coming into the room, picking him up, and putting him on the bed — in one clumsy action, with Spacey landing at a slight angle on top of him. He said Spacey “was, like, pressing into me,” and that he remembers Spacey “tightening his arms.” But while he can't recall exactly how long Spacey remained on top of him, Rapp said he was able to “squirm” away after a short period.

“It was a frozen moment,” Rapp said of the entire encounter, with a deep, exasperated sigh. “In terms of fight or flight or freeze, I tend to freeze.”

After pushing Spacey off him, Rapp remembered he was able to step into the bathroom and close the door. "I was like, 'What is happening?'” he said. “I saw on the counter next to the sink a picture of him having his arm around a man. So I think on some level I was like, Oh. He's gay. I guess. Then I opened the door, and I was like, 'OK, I'm going to go home now.' He followed me to the front door of the apartment, and as I opened the door to leave, he was leaning on the front door[frame]. And he was like, 'Are you sure you wanna go?' I said, 'Yes, good night,' and then I did leave."

When he was filming the movie adaptation of Six Degrees of Separation in 1993, Spacey appeared on set, visiting a friend, which upset Rapp: "I certainly didn't want to make eye contact with him. And I wasn't close with anybody on the set that I could share the experience that I was having in that moment... It felt like I was trying to disappear.” He wondered, "What am I supposed to do if I ever work with him? What am I supposed to do? What do I do?!”

As Spacey's star began to ascend, winning a Tony, two Oscars, Golden Globes and more awards, Rapp told friends about the incident over the years, and even referred to the Spacey encounter in an interview with The Advocate, when discussing actors who have come out; Spacey's name was redacted:

That makes me think of [a certain leading man] in [a certain award-winning film].

It’s hard for me to evaluate his acting because I’m so angry at him. I met him when I was 14 because we were both in plays and he invited me to a party at his house. I was bored, so I was in his bedroom watching TV and didn’t know everybody had left, and he came to the bedroom and he picked me up and lay down on top of me.

Oh, my God! What did you do? I squirmed away and went into the bathroom. I came out and I excused myself, and he’s like “You sure you want to go?” I always wonder if he remembers it, because he was pretty drunk. And he’s had so many. 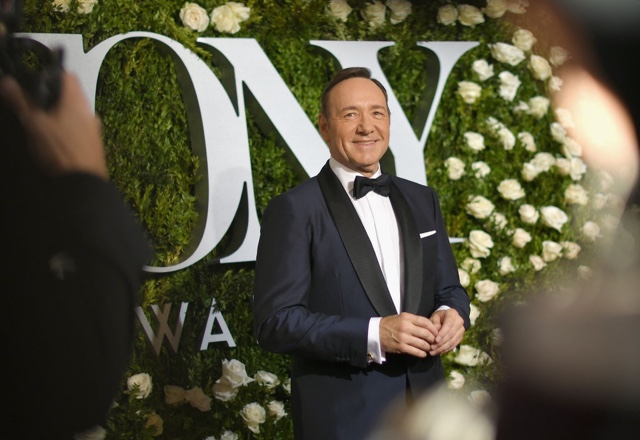 When initially asked for comment, Spacey did not respond, but after the Buzzfeed article was published, Spacey issued a statement via Twitter, apologizing to Rapp—blaming it on being drunk—and then came out:

I have a lot of respect and admiration for Anthony Rapp as an actor. I'm beyond horrified to hear his story. I honestly do not remember the encounter, it would have been over 30 years ago. But if I did behave then as he describes, I owe him the sincerest apology for what would have been deeply inappropriate behavior, and I am sorry for all the feeling he describes having carried with him all these years.

This story has encouraged me to address other things about my life. I know that there are stories out there about me and that some have been fueled by the fact that I have been so protective of my privacy. As those closest to me know, in my life I have had relationships with both men and women. I have loved and had romantic encounters with men throughout my life, and and I choose now to live as a gay man. I want to deal with this honestly and openly and that starts with examining my own behavior.

I keep rereading this statement and getting angrier. Coming out is a beautiful part of being gay. Attaching it to this vileness is so wrong.

Coming out as a gay man is not the same thing as coming out as someone who preyed on a 14-year-old. Conflating those things is disgusting

Kevin Spacey has just invented something that has never existed before: a bad time to come out.

Rapp, who is now starring in CBS's Star Trek: Discover, said on Twitter, "I came forward with my story, standing on the shoulders of the many courageous women and men who have been speaking out to shine a light and hopefully make a difference, as they have done for me. Everything I wanted to say about my experience is in that article, and I have no further comment about it at this time."

#anthony rapp
#broadway
#harvey weinstein
#Kevin spacey
#predatory behavior
#sexual misconduct
Do you know the scoop? Comment below or Send us a Tip