Another Round of Flirtinis for Carrie & Co. 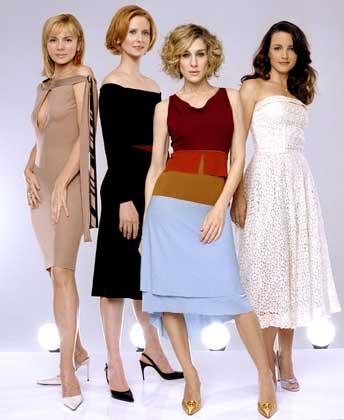 Back in May we asked what you thought of a Sex and the City movie, 51% of you thought it was coming three years too late. Whether we like it or not, the movie is going to happen - after Kim Cattrall finally signed on. Word is that she wanted a higher salary and a deal for a future HBO show, both of which she got. Guess her post-Samantha days haven't been filled with great roles (see: Ice Princess with Michelle Trachtenberg).

The question now is, what will the plot-line be when the ladies hit the big screen? We have some ideas:

• Samantha joins AARP (Cattrall is now 51!) and cheats on Smith with Andre Balazs.
• Charlotte considers having an affair with the manny.
• Miranda, as a Brooklyn resident, joins the fight to stop overdevelopment of the waterfront and to bring more F train service to Brooklyn.
• Carrie (whose shoe loyalties now go to Christian Louboutin) and Big consider adopting a baby from Africa.

Variety has an innuendo-filled article on the project, telling us HBO is "getting in bed" with New Line to get the film on the big screen after "much foreplay". As for the cast, the original ladies are all back, along with Mario Cantone - though there's no word on Chris Noth or David Eigenberg.

We wonder what the movie promo in New York will be like. Will bars serve Flirtinis? Will the premiere be held during Fashion Week? Will a special Miranda-edition Bugaboo be released?