"Annie Hall 2" "Spotted" "Filming" On The Upper East Side

We live in a world in which there are 129 movie sequels currently in production—the risk inherent in financing original stories may be killing movies as an art form (and inspiring stars to migrate to TV for meaty roles), but on the other hand, as one enthusiastic IMDB user put it, "returning to familiar characters and worlds we love is like covering yourself with a warm blanket." So who would possibly say no to jumping under a warm blanket and snuggling up to a geriatric Alvy Singer and Annie Hall in a sequel nobody has ever wanted?

Redditors spotted the signs for "Annie Hall 2" on E 66th Street between 2nd and 3rd Avenue over the weekend. Clearly there could be something to this, based on the attention to detail: the flyer was put up on a street where Annie Hall was actually filmed.—so at least someone involved had done their homework.

Was it just a code name for another unrelated film (directors love to do that)? Was Woody Allen filming again in the city and getting cute about his project names (unlikely, since almost every Allen film of the last decade+ has gone by "Untitled Woody Allen Project" while filming—also, Allen is already busy filming his new movie with Joaquin Phoenix and Emma Stone in Rhode Island)? Or had Allen, in a fit of panic after the public bashing he got over Dylan Farrow, decided to do a very un-Woody thing and win people back by making a sequel to his most beloved film?

For better or worse (read: much better), it is likely none of the above. A source in The Mayor's Office of Media and Entertainment, the agency that oversees all filming in NYC, told us that the signs are not related to any productions that have applied for filming permits. The same was true for signs that have gone up on St. Marks Place (also between 2nd and 3rd Avenues) for "Taxi Driver 2" (a movie which has actually inspired talk of a sequel before, for what it's worth). The source added that the illegal signs would be removed soon. 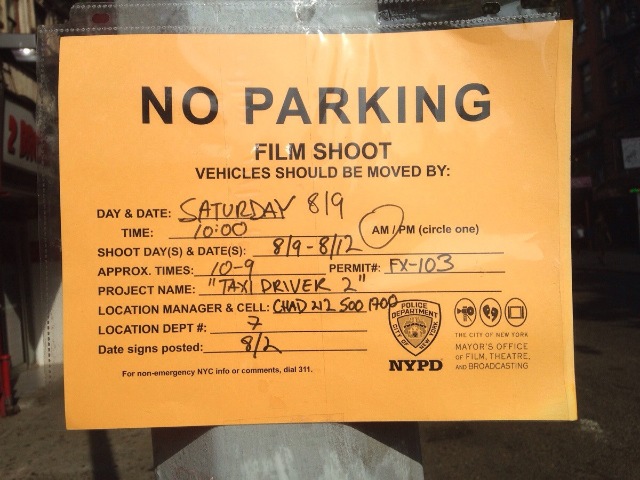 So is "Annie Hall 2" just like that mutant tarantula who didn't roam Park Slope, only re-calibrated to best terrorize the refined sensibilities of Upper East Siders? Are there New Yorkers so cruel as to taunt us with the terrifying prospect of Woody Allen actually romancing a woman of his own age bracket on screen?

There is one other possibility that intrigues us: someone really did write a sequel to Annie Hall, and did a reading of it in the East Village in December 2012. This past spring, NYCineFiles interviewed co-writer Mitchell Fesh, who noted that they have discussed filming "Annie Hall 2" and unleashing it on the public: "Filming them, truncated versions put up on stage as plays, animating them, which are all fun and cool, but something about them being just these weird scripts people can read on the internet is entrancing to me."

While "Annie Hall 2" and "Taxi Driver 2" are almost certainly not real films, we at least can warm ourselves at night at the prospect of a team of female Ghostbusters in the upcoming theatrical event, Ghostbusters 3: Dan Akroyd Made A Deal With An Alien Devil To Get This Movie Made.

#annie hall 2
#fake things that are fake
#filming
#manhattan
#taxi driver 2
#original
Do you know the scoop? Comment below or Send us a Tip