by Jen Carlson
If you read about a dead animal discovered in Brooklyn's Prospect Park, see a photo of an injured swan caught on fishing line, or hear commentary on the mass Canada goose slaughters in the area... it's most likely coming from Anne-Katrin Titze. We recently asked Titze some questions about her role as unofficial wildlife rehabilitator there, and below she discusses her training, the geese, and how she believes Tupper Thomas did "serious harm" to the park.

How long have you lived in Brooklyn for? Close to a decade.

What drew you to the Prospect Park area? The lake and its urban wildlife.

Do you consider yourself the Park's unofficial wildlife rehabilitator? I am a New York State Department of Environmental Conservation licensed Wildlife Rehabilitator and in addition to doing rescues on my own, I have worked together with the Urban Park Rangers and members of the Prospect Park Alliance Natural Resources Crew on animal rescues. There are many people who care that contact me to share their observations.

What are the biggest problems you see at the park? Tupper Thomas has done serious harm to the landscape of Prospect Park with her failed barbecue policy. “Charcoal kills trees”—a large number of trees are dying and the lake environment is being polluted throughout the year by the burning and dumping of petroleum distillates. Mayor Bloomberg wants to ban smoking in public parks, that is a good start.

The bottom of a grassy hill near the lake was turned into a concrete barbecue location by the Prospect Park Alliance in 2010. How foolish is that?

The future protection of wildlife and their habitat is a big question. It is valuable for children who live in a large urban environment to interact with animals in a park, not only a zoo, and learn to respect other living creatures. This is a challenge worth taking on. 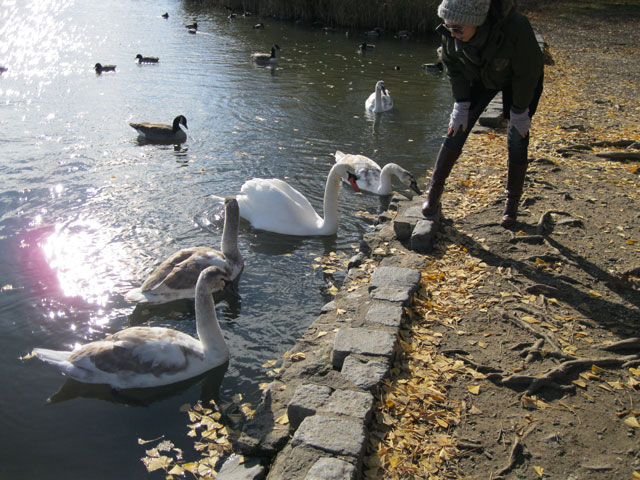 Do you see solutions for any of these—please tell us about them. In November of 2009, I volunteered for three days in the lake, wearing waders, as part of the fish and turtle census. This was at the very start of the Lakeside Center project. The amount of debris and garbage in Prospect Park Lake, uncovered in such a small area was troubling. The bottom of the lake is also filled with decades of mud and the workers would sink in two to three feet and at times had to be pulled out with a rope. The erosion around the lakeside has exposed tree roots and uprooted trees for years. The destroyed stonework has allowed the lake to overflow time and time again. Take a look at the above photo and you can see an example of how extensive the damage is.

If we lose Prospect Park Lake due to continued lack of care and the non-commitment of resources to the existing lake, our great city will have lost a vital urban wildlife habitat.

How often do you visit Prospect Park, and do you always stop by the lake? Several times a week, I stop by the lake and walk the watercourse. A big problem for the wildlife has been the irresponsible fishing that goes on unenforced, injuring animals with carelessly discarded fishing line and lures with illegal barbed hooks.

Recently you sent us a photo of a marked Canada goose—why was it marked? Markers are used by researchers to address many questions regarding bird movements and other aspects of their life history. They enable researchers to track movements of individual banded birds without the need to recapture them. The banding and color marking of birds is conducted by a variety of researchers, some with State, Federal, NGO, or university affiliations. I reported Canada Goose H9Z4 and will let you know the details when I receive them from the researcher.

Do you think the goose population at the Park should be able to thrive, or does it need to be controlled because of the air traffic above? I compiled the statistics of record for the resident waterfowl of Prospect Park. There were 235 resident Canada Geese at Prospect Park Lake, along with 312 Mallards. The Prospect Park Alliance knew from my official NY State DEC count on January 17, 2010 that what was going to be killed in Prospect Park on July 8th could only be all of the resident geese and their newly-born young. There is no proof that these killings of resident geese improved air safety at all.

Currently there are 162 newly arrived Canada Geese since then and 215 Mallards enjoying Prospect Park and its lake. This is the only lake in Brooklyn and it is inside 525 acres of parkland. I do not see why New York City would not encourage waterfowl to thrive at a 60 plus acre watercourse.

#Anne-Katrin Titze
#brooklyn
#interview
#lake
#prospect park
#rehabilitator
#wildlife
Do you know the scoop? Comment below or Send us a Tip
A new Gothamist is coming! We’ve moved comments over to our beta site. Click here to join the conversation and get a preview of our new website.