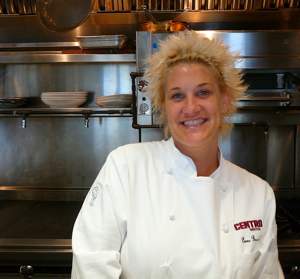 Anne Burrell has barely gotten any sleep in the last month. Almost all of her time has gone into the opening of the new West Village restaurant Centro Vinoteca. Its small, trench-style kitchen features a pass window that looks out onto the bar area; the dining room itself is spread out over two levels with about 75 seats total. 1960’s era Italian glass chandeliers hang over the tables (“They make me think of Lite-Brite,” says Burrell). A good amount of early press for the restaurant has been about its piccolini, or small plates menu, which features items like Fried Cauliflower Wedges with Parmigiano Crust and Agliata ($6), and Stir-Fried Marinated Olives ($3). Entrees range from $19 to $36.

Burrell hopes to eventually be open from 7:30 AM to 2 AM. Though only open for dinner service at the moment, Centro Vinoteca has become a 24/7 occupation for Burrell; she regularly falls asleep thinking about new ingredients to source, and dreams- at least for the time being- of plate presentations. Although the chef seemed a little tired as she reported these latest developments, it hardly sounded like she was complaining.

We borrowed a few minutes of Burrell’s time one morning last week at the Centro Vinoteca bar, as the restaurant readied for its tenth day of being open. During the interview, we noticed some unusual stitching on the arm of her customized chef’s jacket. Finally, Burrell straightened out her sleeve so we could get a better look. Embroidered on the right bicep part of her jacket is a caricature of the chef herself, looking somewhat like a refugee from a Calvin and Hobbes cartoon, prominent spring-loaded hair included, and ready to cook.

Can you talk about Centro Vinoteca's piccolini menu?
Sure. I wrote this menu for people to be able to come in and eat food that’s seasonal, thoughtful, and creative, but not frou-frou or scary. The piccolini menu comes from my experiences as a diner- when I go out with my friends, I like to eat. In New York, everybody’s working, so you see your friends maybe once a week, or every two weeks. When you finally meet up, it’s more fun to order stuff like this. Before we were open here, we would go to August and we’d order: “Get us some croquettes and french fries- stat.” We’d be looking at the wine list, and then go on to order a meal after that. It’s a good way to start your dinner, rather than to just dive into the breadbasket. Friday night when you’re out with your friends, invariably you can’t get a table until 9:30 anyway, so you want a few nibbles. So that’s the piccolini, and basically, I wrote a menu with food on it that I’d be excited to eat.

Main courses seem quite substantial- can you give me a breakdown of what goes into, say, the pork chop dish?
It’s Heritage Foods pork. It’s a big piece, so out of a rib rack, I’ll cut about 6 or 7 pork chops. It gets brined for about two days. The brine consists of water, sugar, salt, mirepoix, fennel, garlic, coriander seeds, fennel seeds, and herbs. We’ll leave the big fat rib on the outside of the chop, because the fat part is good. The pork is rolled in fennel pollen and we grill it. When fennel pollen gets hot, it gets really aromatic, so the idea is to have the char on the outside, and then to have the brine keep the pork juicy on the inside. It’s served over bacon, sautéed swiss chard, and some baby turnips that have been browned in the baby fat. It also gets a garnish of crispy pork skin.

So no tableside pepper grinding at Centro Vinoteca?
There’s pepper for the tables, yeah. I got peppermills for the waiters, though, and haven’t seen them since. If somebody wants pepper, I don’t want to know anything about it. My line cooks come in to work and are like, “okay, where’s the pepper?” I tell them there’s no pepper here. I don’t cook with it. My food, I think, is big. It’s aggressive, it’s aggressively seasoned, and it’s hearty.

It seems as though in NY there are so many female chefs with amazing talent, but for some reason aren’t as well known in the restaurant community, say, as in a city like San Francisco. Comments?
I know [S.F. chef] Traci Des Jardins because we did an Iron Chef against her, and she’s great. There are female chefs here in New York. For some reason in the last few months, there’s been this whole big thing about female chefs, and I don’t really know why. I’m a girl, and I’m a cook- I just like to cook, and I don’t like to worry about the distinctions. We’re just supposed to make good food.

Do you have a favorite spot in NY to grab an after-hours bite?
I’m a big fan of the burgers at Daddy-O. It’s either the Daddy-O burger, or the chicken sandwich there. And now they’ve put hot dogs on the menu. I love hot dogs. [laughs] I also live a block away from The Spotted Pig, so I have to walk past it on my way home.

You’re kind of associated with the Spotted Pig-
It’s more that Mario [Batali] is associated with the Spotted Pig, and so I guess it’s through my association to him. But back to girl chefs, though, I think that April Bloomfield is great. I absolutely love her. I have to say that in general, I love being associated with other chefs. I love being a cook, a chef. A lot of chefs have come in here already- Mark Ladner, Cesare Casella, and Kevin Garcia all came in this week. David Chang and Wylie Dufresne came in a couple of nights ago.

Do chefs offer tokens of good luck to each other when they open restaurants? Did Mario give you a lock of his hair or something?
[laughs, shakes head] No, but Mario always wishes me well. I will always be associated with Mario, and he’s very supportive- he only wants good things for me. I appreciate that. When cooks come in here it’s great: I’ve been going to other chefs’ restaurants for years, and I’m just so happy to be here. It’s thrilling to have a place where I can do my thing now.

Do you have a favorite NY greenmarket?
You know, I’ve always done the greenmarket thing. I just look around and get ideas, but I haven’t really been there in the eight days we’ve been open. We try to do the ecological thing here, though, using biodegradable packaging. We have a service that comes by to collect our fryer oil and turn it into bio-diesel.

If you could take any single specimen of NY street food, like a hot dog or pretzel, and replace it with something else, what would your choice be?
The cold Spag Bol sandwich.

What’s that?
Spag Bol is always the abbreviation for Spaghetti Bolognese when you get tickets in the kitchen. You rip off a hunk of bread, throw some parmesan cheese and cold Bolognese sauce on it, and you've got a sandwich.

I’ve never done that.
Oh yeah. It’s surprisingly delicious [laughs]. But I’d also like to see turkey sandwiches with potato chips on them.