Animal Action Around the City 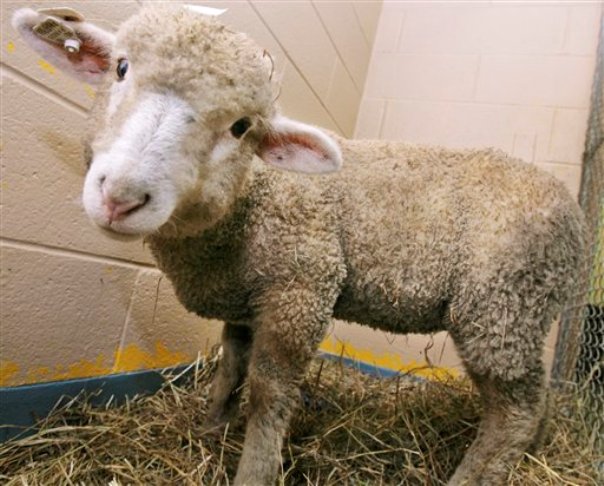 Was this baby lamb a little too eager for the city's Farm Aid concert? Because she was found wandering around the Bronx yesterday morning. Julio Rivera, who saw her near his car, chased her in order to get a hold of her, but then the lamb chased him back! Newsday reported, "The spectacle lasted half an hour until Rivera got the upper hand and corraled Lucky Lady in a parking lot. Responding police officers used camera phones to take pictures of themselves next to the sheep." Hee! The lamb was taken to Animal Care and Control, which determined she is 7 months old and renamed her "Lucky Lady" - they think she escaped from an auction or slaughterhouse. Lucky Lady will be headed to a farm sanctuary upstate.

And then there were two (two!) reports of baby birds falling as they attempted to fly. A 6-week-old falcon was found on Third Avenue in the 50s, while a 6-week-old red tail hawk on 55th Street near the Ziegfeld Theatre prompted the attention of "nine cops, three Parks Department rangers, a volunteer from the Audubon Society, a licensed hawk rehabilitator, a half-dozen good Samaritans, a homeless man, a gaggle of paparazzi" plus onlookers. The Daily News reported that a homeless man tried to run away with the hawk, but the "angry mob" stopped him. It's not clear if the baby hawk is related to Pale Male or Lola, the city's most famous red tailed hawks; the NY Times says the Parks Department isn't performing any DNA tests, but Lincoln Karim, Pale Male documentarian, told the Times, "The hawk is Pale Male's grandchild. It was born at 888 Seventh Avenue on the 34th floor."

And vacuuming the stuffed elephant at the Museum of Natural History is like vacuuming a really delicate carpet.