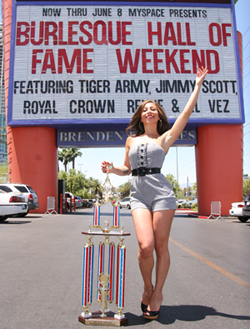 Angie Pontani and her "world famous sisters" are arguably the brightest stars in the city's booming burlesque scene; or at least the most recognizable to mainstream audiences who don't spend much time at the Slipper Room. Pontani is currently starring in a funny/sexy revue she co-wrote with incorrigible cut-up Murray Hill, who emcees the evening. Called This is Burlesque, the two-act extravaganza tap-dances along a fine line between unrepentantly ribald humor and classy, atavistic burlesque without losing its spontaneous charm. (Read the full review.) We recently spoke with Pontani about the show, her love of grilled cheese and her exercise regimen.

So what happened in Vegas in June? I won the title of Reigning Queen of Burlesque Miss Exotic World 2008. There's a big pageant that's been going on for 19 years now, and basically the creme de la creme of burlesque performers from around the world get hand-picked by the Exotic World burlesque museum board. And they come and compete for the title. So I took it back to Brooklyn this year.

How do they decide on a winner? It's based solely on the performance you deliver that night. There's no question and answer or beauty pageant formula. You have four minutes to go up and shake your tail feathers and that's it.

So what did you do with your four minutes? I did one of my oldest and favorite and most traditional acts, which is called Gold Digger. It's very 1940s and 1950s. A lot of the judges are burlesque performers from the '40s and '50s and more classically oriented. In New York we see a lot of burlesque that is kind of borderline performance art. I'm much more of an old school glamor girl, which is kind of what the judges tend to respond to.

I don't recall you doing anything with tassels. No, I like to keep them in a stationary position to preserve them for the long run.

So there's wear and tear when you do a lot of tassel twirling? Oh, absolutely. When I jump rope I wear like 14 sports bras. You've got to keep those cans up.

Can men twirl tassels? Absolutely, anybody can. You don't really have to have substantial breasts to twirl tassels. It's all about the bouncing motion.

What do you get for winning Reigning Queen of Burlesque, besides bragging rights? I have a four foot trophy; I'm only one foot taller than it. I have a beautiful tiara. And I'll get to do a lot of fun events throughout the year; I'll be going to Los Angeles to perform at one of their big, old fashioned theaters in October. I'll do a photo shoot with the pin-up photographer Bunny Yeager, who was most famous for shooting Betty Page and all those ladies back in the day. Fun stuff like that.

How long have you been doing burlesque? A long time. Probably about 12 years.

How did you get started? I started pretty much straight out of High School. I always wanted to be an entertainer, from the moment I could first do anything I was standing on the platform of the stairs in my house making my whole family watch me dance and sing. I kind of thought I wanted to be an actress so I tried to go to school for that. Then I realized it's absolutely not what I wanted to be because I really only wanted to portray myself as glamorously as possible. So I became a waitress. And one of the guys who worked at the restaurant told me I had to audition for a show he was in. I was 17 years old at the time, and I went to see the show, which was literally in a guy's apartment that he had turned into a real speakeasy. It was called Dutch Weisman's. The waitress came over with a champagne bottle headdress and there were showgirls walking around; it was a total burlesque review with stripteases and chorus numbers. As soon as I saw that show I felt like I had come home. I knew this was what I wanted to do and wanted to be. I started out as a chorus girl in that show and worked my up to solo stripteaser. And when that show closed I just started working all the nightclubs on my own.

But the whole burlesque revival hadn't really taken off at that point, had it?
No, this was around '93 or '94. There were a couple other shows like the Blue Angel happening, but again, those are shows that are definitely more risque and toe the line of performance art with edgier material. I love them and I've done them but Dutch Weisman's was a real recreation of a burlesque show. It was fantastic.

I first saw burlesque I guess in '99 or so at the Fez. Did you ever perform there? Murray Hill used to do a Christmas show there so I did that and a couple other shows but not too many. That stage was carpeted and if there's one thing I hate in this world it's a carpeted stage.

Because of the heels?
Yeah, your heel gets stuck on it. I just don't like dancing on carpeted stages.

I had a great time but I got several angry emails from other burlesque performers because in my review of This is Burlesque, I commented that some burlesque shows that I've seen can be heavy on cellulite and light on imagination. [Laughs] Oh, no.

I don't have a problem with people who are overweight, but when I watch people take their clothes off in an erotic way, I'd like them to be in great shape. Is that wrong? You know, people think very differently about the subject. For me personally, when I take off my clothes I want to be in the best shape I can possibly be in. For me, I want to feel good and trim and toned. I don't feel like I dance well after I've been on vacation eating cheeseburgers and spaghetti and pizzas for two weeks. I feel horrible after that when I dance. And I do feel that some people have a hate toward me for that because the burlesque community, as you know, accepts all body types and all images. And I think that's great. But for me personally I feel like I perform better when I'm happy with how I look in that moment. And I try to keep it tight.

It's working. Are there cliques in the New York burlesque scene now? The burlesque world in New York is really gigantic. There are tons of shows and tons of performers. I think the girls and I – and Murray – are our own clique because we spend an ungodly amount of time together. I feel like we're a little gang.

What do you see yourself doing in say ten or twenties years? Still burlesque? Not necessarily. I think there will come a time when my tail feathers are retired. I think I've probably got about ten years left in me but I hope to broaden into a different spectrum. I have different projects I work on all the time. I have a little book I've got going on right now, and I do television. Last night was on 50 Cent's new TV show.

Finally, do you have a favorite bar in New York? The new spot I love is Barrette on Vanderbilt in Brooklyn. The girls and I usually go there after shows; not only do they have great drinks and go-go dancers but they also serve really great grilled cheese sandwiches all night long. Their grilled cheese is on challah bread and I swear to God there must be one stick of butter on each sandwich. And you can get jalapenos or bacon or tomatoes and I get all three. So we'll go there and eat grilled cheese at two o'clock in the morning.

How do you eat like that and stay in such great shape? I jump rope a lot. Jumping rope is one sure way to burn off everything.