The Whitney Museum's big Andy Warhol retrospective opens today, and the King of Pop Art is getting a very NYC welcome: A takeover of a subway station.

The subway ads at the 14th Street-8th Avenue station, home to the A/C/E and (on weekdays) L are now all promoting the show. The temporary installation is really just a series of ads for the exhibit, each featuring a different Warhol piece—you'll see Aretha Franklin, Liza Minelli, Pele, and Deborah Harry, plus his iconic paintings of flowers, skulls, and, yes, a Campbell's soup can. Note: This is not as huge in scale as the months-long David Bowie takeover at the Broadway-Lafayette station. 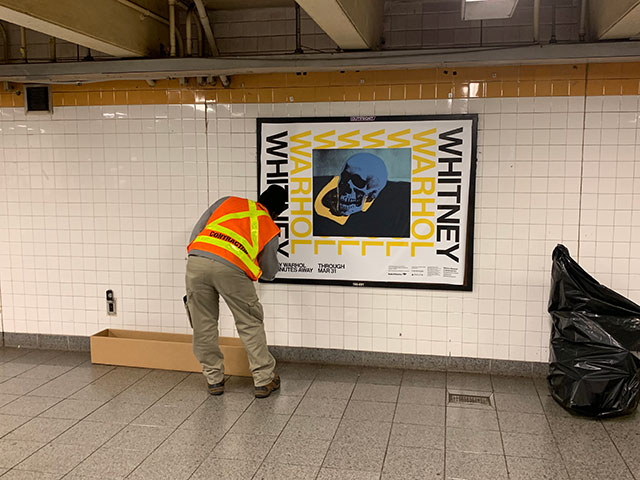 Then we went down to 14th Street to the opening of Nell’s and that was really exciting. Rupert Everett came in with a costar of his. And Nell was sweet, she said I would be the only one allowed to take pictures. But I didn’t want to move around, really. Bianca was there and Lauren Hutton and Schnabel and everybody who’d ordinarily be at the Odeon. Paige went downstairs dancing with Benjamin and Schnabel and Alba Clemente and all those people. Peter Beard was there with his entourage. They’ll charge $5 admission. I don’t know if those downtown kids will put it down because they’re so used to freebies.

WNYC's art critic Deborah Solomon reviewed the Warhol show, "Going through the show, I was surprised, at times, by the scale of the paintings. They stand as tall as fifteen feet. After years of seeing Warhol’s work miniaturized on refrigerator magnets, post cards and note pads, it is easy to forget that many of his paintings have the heroic scale of the Abstract Expressionist paintings of the ‘50s. He can put you in mind of the abstract painters Barnett Newman and Mark Rothko, with their sweeping expanses of red and orange. This matters, reminding us that behind his affectless, gee-whiz façade, Warhol harbored grand ambitions for his art—ambitions that are given their full due in this retrospective."

Alas, the subway installation is more "refrigerator magnet"-sized than museum-sized, so you'll have to head to the nearby Whitney for the full experience (and a $16 cocktail).

Andy Warhol: From A To B And Back Again is at the Whitney through March 31, 2019. The subway takeover is for the next month or so.

#andy warhol
#subway
#whitney museum
Do you know the scoop? Comment below or Send us a Tip