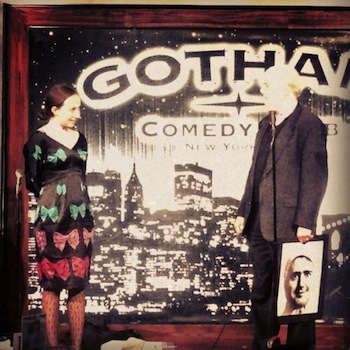 The woman claiming to be Kaufman's daughter, with his brother Michael (via the Comic's Comic
[IMPORTANT UPDATE BELOW]

The "Andy Kaufman Is Still Alive" death hoax rumor has just gone to another level in the wake of this week's Andy Kaufman Awards in New York. These rumors have been around since Kaufman died in 1984, mostly kept alive via tongue-in-cheek comments from Bob Zmuda, who had said Kaufman was "obsessed" with the idea of faking his own death. But at this week's event, Kaufman's brother Michael claimed it to be all true, and that Kaufman has been living in obscurity the past 29 years of his life, raising a family.

According to Defamer and The Comic's Comic, "Michael shared a story of finding his brother's elaborate plans to fake his own death after Andy had passed on, along with a note that he would reappear on Christmas Eve 1999 at his favorite restaurant. Michael went to the restaurant, and though Andy never showed, a letter was handed to him that explained that Andy had gone into hiding to live a normal life and now had a wife and daughter—but didn't want anyone to find out while the Kaufmans' father Stanley was still alive." Stanley passed away over the summer.

Following the incident in 1999, a 24-year-old woman approached Michael, reportedly claiming to be his daughter. She was at the event this week, and Kelly Dwyer, who was in attendance, reported back on Facebook:

"Ok. Tonight was a mindfuck. Anyone who was there will attest. Andy Kaufman's daughter came onstage and claimed he was alive. It was. It was...I can't tell you how it was, only that it was as real as any reality that i've seen. and yeah. I get that it is - could - might all be a hoax. That was the only and last thing I want to say. it was fucking fucked up. She said he is alive and that the passing of his father this July made him want to reach out via her- to Michael, Andy's brother. She said he is watching the award entries, semi and finalists with great interest always. He just wanted to disappear. To be a father. To be an observer. As much as this seems like bullshit as I type it, it was as real as anything I've ever seen. There is video. It was chilling, upsetting and absolutely intriguing. I bawled my eyes out. The entire room was freaked out. It was, if nothing else, brilliant. and incredibly mindfuckng and AWESOME."

If you have video from the night, pass it along! Some say the girl was a theater student, some say they want to believe, some believe in the Death Certificate, some say he's in Albuquerque...

UPDATE:The woman was an actress that Michael Kaufman met earlier in the year.