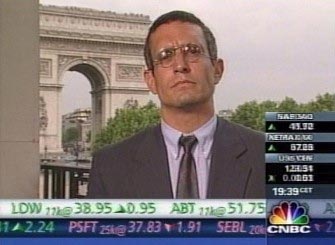 Reading about the The Yes Men's activist exploits is kind of like reading about live action forum trolling. Their acts of identity correction, where they make outrageous, hilarious, and satirical claims while posing as spokespeople for companies such as ExxonMobil and Haliburton, have been covered by news agencies around the world and have helped expose the ludicrous behavior of corporations to the general public. Gothamist talked with Andy Bichlbaum, one of the leading members of The Yes Men to discuss one of their latest pranks- Vivoleum, which involved candles made of human flesh, a dead janitor, and a possible solution to the world's oil crisis.

What was the inspiration for Vivoleum ?
We had done an action about six months before in which we went to a conference on Gulf Coast Re-construction and presented, as Haliburton, a solution to fighting climate change, which was the SurvivaBalls , a suit that could protect corporate CEO's in any climate calamity whatsoever. We got a couple of audience members to put on this big round ball, which you can see pictures of on the website. It's this six foot round orb with these little grubby arms in front of them and you can see their faces sticking out of the front. We showed videos of these balls falling out of a building, swimming through floods, bounding through the Arctic, and being blown about by hurricanes. We thought this will really get a reaction and people will see how wrong and absurd of an idea it is that millions of people could be dieing in these horrible climate catastrophes and here's Halliburton saying, "CEO's can survive and here's how," but nobody did react badly. People just applauded and asked questions about whether these things would work against terrorism.

When we decided to do the Exxon thing we decided to do it in such a way that the audience couldn't possibly misunderstand. They'd have to viscerally see what we were talking about. So we brought these candles supposedly made of human flesh, showed a video that made it clear that they were made of human flesh, and talked about the billions of people who would die of climate change and how we'd have to use them as fuel. It was basically to lay it out very clearly so the audience would have to understand, and they did.

What, in your opinion, are some of the most surprising audience reactions that you've gotten?
There were three questions about the SurvivaBall. There was the one about terrorism, the next one was a technical question from someone who knew a bit about engineering and asked, "How are you going to get all these mechanical things in there and still have it bounce? You're going to have to build a tremendous amount of flexibility into the outer shell if you're going to build all of these weapons." That was pretty strange because the issue wasn't how we were going to make it work but whether if it should exist at all. The third question was how much it would cost.

Has anyone from the audience ever changed their political views after seeing one of your presentations?
No, but that's not really our objective. We did do it originally for that reason. We wanted people to see what was wrong and we still have that hope that these lectures will inspire people to give up their ways, but what we end up using these lectures for is to show people that this is a grave situation where there are all of these foot soldiers in this massive corporate system who are just happy to accept any orders that come their way. We'd like to be able to inspire people and that people in the audience look at what we do and think twice about it, but that hasn't happened yet.

Was there ever a time when you were attempting a prank and a wrench was thrown into the works?
Oh, yeah, it's happened a bunch of times. Once, in Finland, we showed up an hour late because we got the time zone wrong. We thought that all of Europe was on the same time zone. That was embarrassing, but they were very polite and rescheduled our event. Once an entire conference was canceled, so we had scheduled our own special instead. Once we went to speak in front of a group called The International Web Police. That time we threw the wrench into our own works by even going. The wrench in the works there was that they threw us out. Physically. We always expect to be thrown physically out. That would be the normal thing, but things usually go as we plan them, so that's actually the main wrench- that these audiences of incredibly smart people are just fine with the policies that we present. That's a major wrench in the works of the entire world, that the real policies of these companies and organizations are not opposed by enough people.

Which of the user generated pranks submitted to your site, which did you enjoy most?
The chairman of GM was speaking at a giant auto show in LA, making vacant statements about green cars and the company having a policy of energy efficiency, despite the facts being quite different. These people went up and congratulating the chairman of general motors for his forward looking and green policies in front of hundreds of people and journalists. They brought up a massive certificate for him to sign that was basically a contract that, if signed, would guarantee that GM would become the Greenest and most energy efficient car company in the world, as they had pledged to do. All the had to do was sign it and it would guarantee it would happen, but, of course, he refused and they were ushered off the stage. It got tremendous press and was a real coup. That was about a year ago.

Please share a strange "Only in New York" moment.
Mike [Bonanno] here, who's in the car with me, was crossing the Williamsburg Bridge on the scaffolding. I guess the door was unlocked; he climbed to the top to this little house, and sat there. He watched a girl walk around on the roof, no problem. Just somebody walking around on the roof. It's not an only in New York moment, but it happened in New York.

Which New Yorker do you most admire?
Bill Moyers. He's great and done a lot of great work. A lot of fantastic journalism and opened some real holes through which we could see reality. Woody Allen, he's really funny. Abbie Hoffman. Emma Goldman. Dorothy Day

Given the opportunity, how would you change New York?
Get rid of the damn cars. Close it off to cars and establish a train system or a public bicycle system where you can rent bikes for cheap during the day. It would dramatically improve not only the city but the health of all the people coming in and already in the city. Make all the museums free like it was 30 years ago. Make it so that all the schools are funded to the same tune so that the neighborhood your in doesn't affect the quality of the teacher you'll get. And increase the salaries of those teachers. And make adequate healthcare available to everybody.

Under what conditions have you thought of leaving New York?
Good conditions. A little party with flowers, champagne, and balloons going off into the sky would be a nice send off. A little circle of friends saying, "Goodbye. It was nice to have you."

What do you consider a perfect day of recreation in New York?
Critical Mass is the best entertainment there is. I've been on two or three of them here and it's just incredible. You're riding along with thousands of other bicyclists. You take over the streets. You see the city for the first time. It's tremendously empowering and kind of indescribable

Andy will be appearing with Billionaires for Bush founder Andrew Boyd at the Bluestockings Book Store at 172 Allen St. on Thursday, July 19th at 7 PM for a screening of short films documenting various political shenanigans, including his own. Suggested donation of 5 to 10 dollars.