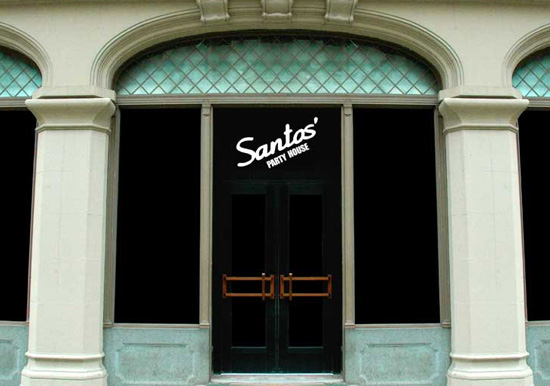 For the past few years, Andrew W.K. and friends have been working at opening their venue at 100 Lafayette. Finally the space officially opens tonight, following a few days of confusing press.

Yesterday it was reported that the original name of the space, Santa's Party House, was dropped for the simpler 100 Lafayette name; this came with a glitzy gold logo and promises of table service. Then W.K. himself cleared things up, saying the name was actually Santos' Party House, and the crew have set up shop in the two-level, 8000 sq. foot venue. What to expect?

Focused on blurring the lines between music and art culture, the venue is designed to function as a concert hall, dance club, and lounge. Featuring a top-notch, global lineup of weekly residents and one-off events, Santos' Party House has been built from the ground up to rival any venue in the world.

The friends of W.K. at PaperMag announced that the space would open to the masses tonight, saying, "tonight it's gonna be a pay-to-play dance-a-thon from 10 p.m. to 4 a.m. Go and be part of the new New York nightlife history in the making." Meanwhile, nightlife legend Steve Lewis chimes in on his blog, saying, "I think it’s going to be cool, because the players involved are very talented, experienced, honest, and true to their school. They have worked really hard, against impossible odds, to get it open."