Andrew Sarris, whose writing about film helped transform how the American public views movies, died this morning at age 83. Sarris had written for The Village Voice and then the New York Observer (fired in 2009), and also taught film courses at Columbia University. His wife, film critic Molly Haskell, tells the Times the cause of death "was complications from a fall."

Sarris famously introduced the auteur theory—the idea that a director helps shape the creative intent of a film—to America. While the brainy cineastes at Cahiers du Cinema in France—Jean-Luc Godard, Eric Rohmer, Claude Chabrol, and Francois Truffaut, all who later became renowned directors—first wrote about it (Truffaut's 1954 essay said, "There are no good and bad movies, only good and bad directors"), Sarris's breakthrough 1962 essay, "Notes on the auteur theory" [PDF], brought it to the States. His 1968 book, The American Cinema: Directors and Directions, 1929-1968, went further by analyzing directors and and classifying them. Of course, soon enough there was backlash from screenwriters who said their words were just as important to the film's heart.

Besides teaching us to think seriously about film after the lights come on in the theater, Sarris and his fellow critics of his heyday became fun to follow, for their thoughts and fights. They made talking about films seem important and exciting. From the Times obituary:

Film criticism had reached a heady pitch amid the cultural upheavals of that time, and Mr. Sarris’s temperament fit that age like a glove on a fencer’s hand.

He took his place among a handful of stylish and congenitally disputatious critics: Pauline Kael, Stanley Kauffmann, John Simon and Manny Farber. They agreed on just a single point: that film was art worthy of sustained thought and argumentation.

“We were so gloriously contentious, everyone bitching at everyone,” Mr. Sarris recalled in a 2009 interview with The New York Times. “We all said some stupid things, but film seemed to matter so much...

Mr. Sarris gained renown as an intellectual duelist, battling most spectacularly with Ms. Kael, who wrote for The New Yorker. She delighted in lancing the auteurists as a wolf pack of nerdy and too-pale young men. Mr. Sarris returned the favor, slashing at her as an undisciplined hedonist. Devotees of the two critics, in Sharks-vs.-Jets fashion, divided themselves into feuding camps called the Sarristes and the Paulettes.

A rough cordiality attended to the relationship between Mr. Sarris and Ms. Kael, but that is not to overstate their détente. When Mr. Sarris married Ms. Haskell in 1969, the couple invited Ms. Kael. “That’s O.K.,” Ms. Kael replied. “I’ll go to Molly’s next wedding.”

In another celebrated exchange of critical detonations, the often acidic John Simon wrote in The Times in 1971 that “perversity is certainly the most saving grace of Sarris’s criticism, the humor being mostly unintentional.”

To which Mr. Sarris replied: “Simon is the greatest film critic of the 19th century.”

Famously, Sarris raved about Psycho in 1960, while Kael hated it. Sarris wrote in the Voice in 1960:

A close inspection of "PSYCHO" indicates not only that the French have been right all along, but that Hitchcock is the most-daring avant-garde film-maker in America today. Besides making previous horror films look like variations of "Pollyanna," "Psycho" is overlaid with a richly symbolic commentary on the modern world as a public swamp in which human feelings and passions are flushed down the drain. What once seemed like impurities in his patented cut-and-chase technique now give "Psycho" and the rest of Hollywood Hitchcock a personal flavor and intellectual penetration which his British classics lack...

"Psycho" should be seen at least three times by any discerning film-goer, the first time for the sheer terror of the experience, and on this occasion I fully agree with Hitchcock that only a congenital spoilsport would reveal the plot; the second time for the macabre comedy inherent in the conception of the film; and the third for all the hidden meanings and symbols lurking beneath the surface of the first American movie since "Touch of Evil" to stand in the same creative rank as the great European films.

In The American Cinema (published in 1968), Sarris wrote of Francis Ford Coppola (who then only had four films under his belt), "Francis Ford Coppola is probably the first reasonably talented and sensibly adaptable directorial talent to emerge from a university curriculum in film-making. You're a Big Boy Now seemed remarkably eclectic even under the circumstances. If the direction of [Mike] Nichols on The Graduate has an edge on Coppola's Big Boy, it is that Nichols berrow only from good movies whereas Coppola occasionally borrows from bad ones. Curiously, Coppola seems infinitely more merciful to his grotesques than does anything for-an-effect Nichols. Coppola may be heard from more decisively in the future." (In 1972, Coppola released The Godfather).

Kathryn Bigelow, who won an Oscar for directing The Hurt Locker, was one of his graduate students at Columbia. She told the Star-Ledger in 2009, "He really is a national treasure," and recalled the "glee, and the light in his eyes" when he'd discuss film. "He just bestows you with his enthusiasm, and you're infused with it for the rest of your life." But not everyone loved him—note the name of the villain in the movie Galaxy Quest. 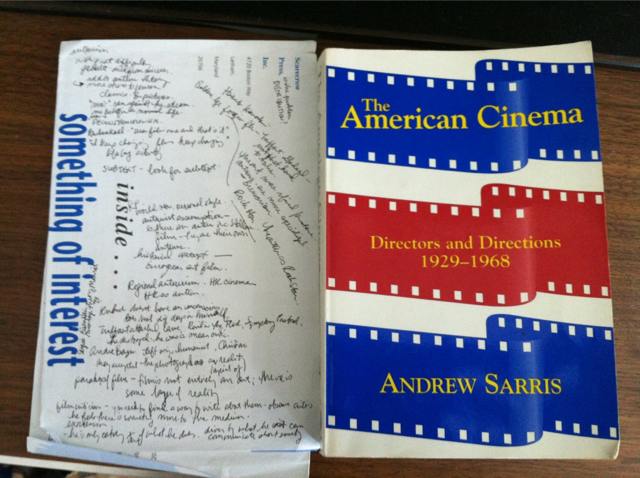 Jen Chung's copy of The American Cinema, plus her notes from a 2001 talk he gave

Our favorite Sarris anecdote is from when we took his undergraduate class in 1998. One day, before class, we saw him with a thermos at the cafe in Columbia's Dodge Hall. Of course, we thought, he must be filling up on some strong black coffee. But then we heard him tell the barista, "Can you fill this with hot chocolate?"

#andrew sarris
#film criticism
#molly haskell
#observer
#pauline kael
#village voice
Do you know the scoop? Comment below or Send us a Tip