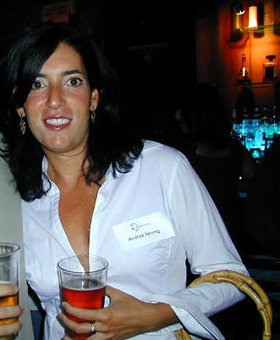 Last night food blogger Andrea Strong played the role of her (really mean) self in the Restaurant Wars episode of Top Chef. She was there as an "undercover blogger," an accurate title given by Padma - as Strong got less screen-time than random walk-ins.

The competition split the contestants into two teams each with the task of creating a restaurant. Strong gave comments about the decor, service and meals that were read aloud during the judge's table; she also included her thoughts (slightly altered from what was read on air) on her blog, The Strong Buzz.

"The host had a sweating problem. Note to host: get thee some Right Guard."

"The first sensation I had upon walking in to Restuarant Garage was the suffocating stink of vanilla."

Who sees black tableclothes and thinks: Billy Idol?! Anyway, she didn't seem to like the food either but confesses on her blog that, "I know that I really like Casey, Tre and CJ, and I didn't really love their dishes, and had I known more about them and their personalities, I might not have been as clear-sighted in my judgments." Um, way to go?

Grub Street has a chat posted in which it's disclosed that "it was supposed to be a whole table of bloggers…but they wanted us to not write about Top Chef at all, and that couldn’t happen. Only Andrea took the pledge." The pledge included signing "a million dollar confidentiality agreement." When did the foodies become so evil and corrupt?

#Andrea Strong
#Billy Idol
#bloggers
#comments
#food
#grub street
#love
#restaurant
#top chef
#tv
Do you know the scoop? Comment below or Send us a Tip
A new Gothamist is coming! We’ve moved comments over to our beta site. Click here to join the conversation and get a preview of our new website.