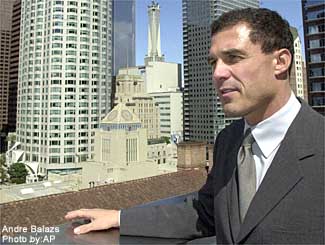 Just after Ethan Hawke declared more love for the Hotel Chelsea and more fear about the changes there being the final nail in the coffin of "old New York," The Observer suspects his exes ex of helping to hold the hammer.

Earlier this summer hotel developer André Balazs was spotted in the lobby of the hotel once it was under management of his pals Richard Born and Ira Drukier of BD Hotels (together the trio made the Mercer). The unofficial blog of the establishment went and looked back at some of Balazs's interviews, pulling some choice quotes that would make it seem that he was more in favor of the Bards than his buddies. He even touched on exactly what makes the Chelsea what it is, saying "Well, a good hotel is fascinating to me because it has always brought out the extremes in human behavior. There are more suicides, there are more romances, there are more illicit affairs. People are unhinged a little in a good hotel.”

Resident Ed Hamilton tells us, "The barbarians are at the gates and it’s the end of an era, as all signs point to the conclusion that Marlene Krauss and David Elder intend to create a sanitized version of the Chelsea Hotel. It’s a damn shame too, because what we have here is real history, not fake history brought to you by Disney. When you sit in our world-famous lobby you can almost literally feel the presence of the great artists who have walked through those doors, people like Burroughs and Warhol and Dylan. There’s a tingling creative energy here that these outsiders simply don’t seem able to understand or appreciate."

Stripping away that history is pricey, with renovation costs estimated in the $50 million range Balazs may be the only one to turn the building into a more polished version of its former self, but to echo what Hamilton is saying: why does it need be touched at all? We, at the very least, hope the roof stays in tact! Balazs has been warned before to keep the integrity of a hotel while refurbishing it, while working on the Chateau Marmont late fashion photog Helmut Newton warned him not to “fuck it up.” Currently everyone is denying his participation in doing exactly that to the Hotel Chelsea, but given his recent appearances there, his relationship with BD and his knack for doing this sort of job -- the Observer is even asking "how much longer before Mr. Balazs officially joins the fray?"

#affairs
#Chateau Marmont
#Chelsea
#chelsea hotel
#david
#David Elder
#disney
#ethan hawke
#fashion
#history
#hotel chelsea
#hotels
#love
#new york
#newton
#people
#the fray
#the observer
Do you know the scoop? Comment below or Send us a Tip
A new Gothamist is coming! We’ve moved comments over to our beta site. Click here to join the conversation and get a preview of our new website.