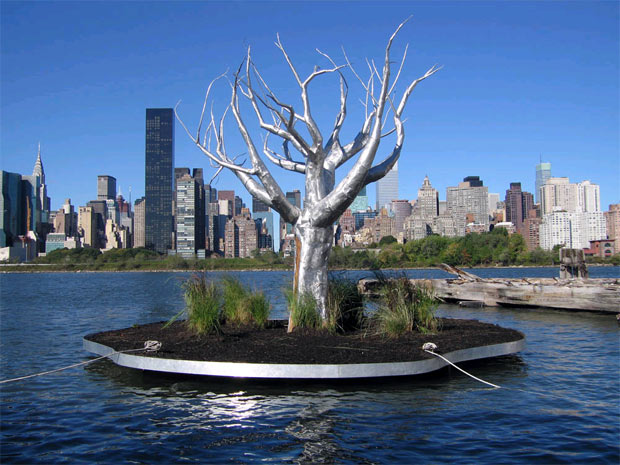 This past weekend, an aluminum tree sculpture, dubbed A Tree for Anable Basin, built upon a floating island, set sail off Hunters Point. The project by Chico MacMurtrie and Amoprhic Robot Works was conceived to investigate and celebrate "the enigmatic, rapidly changing waterfront environment of Long Island City." It also acts as a "condominium for birds"; the press release reads:

It is designed to emote the displacement of nature, specifically of migratory water birds by industrial activity and urban development.

This public art sculpture tells the story of NYC's waterfront past, present and future, giving the birds not just a sanctuary, but a place in history. Responding to the ceaseless tension between permanence and transition that informs urban landscapes, the tree is deliberately not grounded -- without roots it can float along the waterways, move with the ebb and flow of the tide, its metal branches softly blowing in the wind.

Anable Tree project participant - and Gothamist contributor - Gideon Fink Shapiro tells us that the site off 44th Drive in Long Island City is temporary. The tree may need move to another spot on the waterfront later on, but it will be at 4-40 44th Drive through this week.

The Anable Tree has been over two years in the making and was created in response to A Place In History's Long Island City in Context public art competition.