I'm told that Bill Murray seems too cranky to speak to me. It's understandable, seeing as how we just walked from the Municipal Building across the Brooklyn Bridge to Jane's Carousel in DUMBO as part of the annual Poets House poetry walk on Monday. As we stopped to listen to poetry readings by the likes of Billy Collins and Gregory Pardlo at the first arch of the bridge, there was little-to-no shade to provide relief from one of the hottest days of the year so far. Between the heat and dodging tourists, cyclists and gawkers who stuck their cameras out and whisper-shrieked "There's Bill Murray!," who wouldn't be a bit cranky?

The Poetry Walk Across the Brooklyn Bridge has become a beloved annual tradition and benefit for Poets House, the national poetry library and literary center started by U.S. Poet Laureate Stanley Kunitz and arts administrator Elizabeth Kray in the 1980s. This was the 22nd year they've held the walk; it was also a celebration of the 30th anniversary of Poets House.

The walk is held in honor of Elizabeth Kray, "who was very interested in poetry in the urban environment and the idea of poems in the places that they celebrate," explained Executive Director Lee Briccetti. She thinks of it as the true beginning of summer, a chance to feel poetry under your boot soles: "It's a ritual because Whitman is speaking to you and you're traveling through time and thinking about your city in time," she told me, referring to the tradition of a poet reading Walt Whitman's "Crossing Brooklyn Ferry" at the end of the walk (it was read every year by the great Galway Kinnell before his death in 2014). "I think it's almost a religious experience for many people who come over and over again." 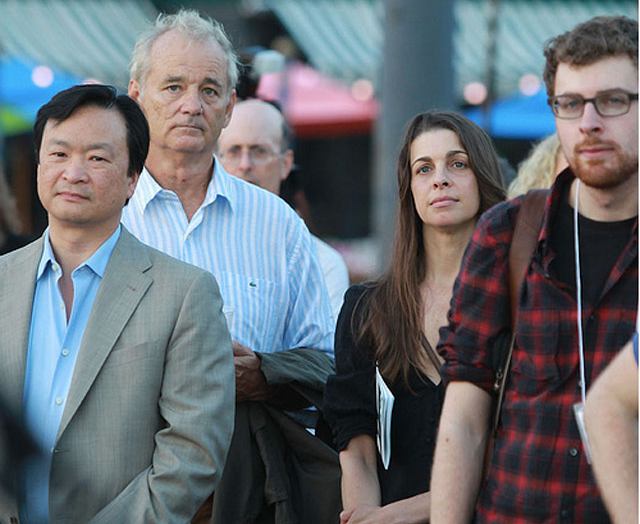 Having attended the event in recent years, I can attest to that. It is rare for poetry to have to struggle with the cacophony of the everyday—readings generally take place in dimly-lit bars, sequestered book stores, and pin-drop quiet libraries. Here on the bridge, the meticulously-constructed phrases of Whitman, Hart Crane and Elizabeth Bishop must battle for ear space with the dings of exasperated cyclists, the hum of low-flying news helicopters, and the constant din of cars. The stillness of poetry clashes with the urban environment in a spectacular way, forcing both poets and listeners to adjust to the living city. Simply put, there is no other poetry event like it in the world.

"Then, the cherry on the cupcake is that Bill Murray started to come and he fell in love with the idea of poetry in the urban environment, he loved the walk," Briccetti added. "He's a little bit like a poet philosopher king." 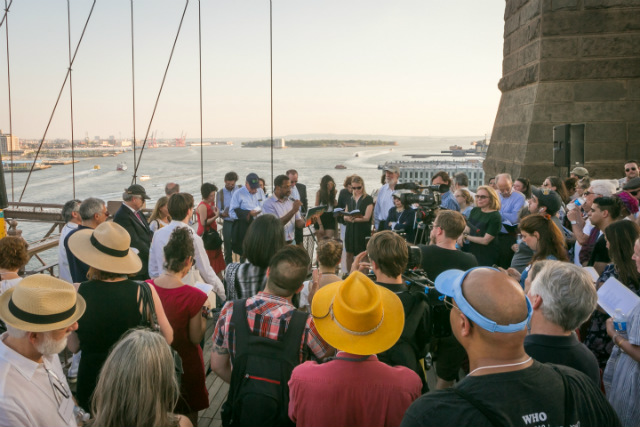 It's hard to avoid the subject of Murray at the walk. He was introduced to Poets House by founding board member Frank Platt, who happens to be Murray's neighbor. Murray was at the first bridge walk in 1995 and has come almost every year since (he flew in last minute one year while filming Moonrise Kingdom sporting a pair of fake black eyes). He has frequently been one of the featured readers at the dinner after the walk. Murray even provided the seed money to catalog the Poets House library when they couldn't find another source. As Briccetti put it, "he's used his fame and notoriety really to push poetry out into the world in a very different way."

To that last point, Murray was being honored by Poets House at this year's event with the Elizabeth Kray Award for "service to the field of poetry." (His neighbor and friend Platt was also being honored with the same award.) The mutually-appreciative relationship between Poets House and Murray seems both out of left field and also completely of a kind with Murray's Manic Pixie Dream Dude public persona.

He's one of the most famous and approachable actors in the world, who has become something of an Internet legend and urban sprite, popping up at bar openings, kickball games, and SNL afterparties without an entourage. There is an innocence to his open-hearted embrace of celebrity, unlike most of his peers; his creative and social life outside of his work seems to be propelled by an anything goes Dadaist spirit. He makes classical music, he crashes Brooklyn house parties, he sings karaoke with fans, he even attends Bill Murray celebrations. As Sofia Coppola once put it, "Because it’s Bill, I’m not surprised. He is always surprising. That’s what’s fun about him."

A few years ago, Murray explained his philosophy to Charlie Rose like so: "I live a little bit on the seat of my pants, I try to be alert and available. I try to be available for life to happen to me. We’re in this life, and if you’re not available, the sort of ordinary time goes past and you didn’t live it. But if you’re available, life gets huge. You’re really living it."

Ok this is super shareworthy! Today I had to wonderful pleasure of photographing Melanie and Richard- who came all the way from Sydney, Australia!! As we were walking through DUMBO, shooting away, BILL MURRAY walked by and congratulated them! Then proceeded to allow them to take a picture with them! 😱😱😱It was also super awesome for Richard- who is a huge Bill Murray FAN!!! #socool #billmurray #nyc

Considering the fact that much of the evening's festivities revolve around him, I asked the Poets House press people if I'll be able to interview Murray at some point; I want to know about his devotion to Poets House, where he picked up his love for poetry, whether he writes any poetry himself, how he balances private Bill with the guy who likes to roll down his window and ask strangers questions about Dire Straits. When we gather outside the Municipal Building to kick off the walk, I'm told that any conversations with Murray will have to come before the dinner, as they want to let him enjoy the actual walk.

It's impossible not to be drawn to him though, as I watch Murray wander around the crowd without a care for the onlookers, alternatively greeting friends and fielding selfie requests. He pauses at one point to close his eyes tightly and listen to Monica Youn read "Walking Down Park" by the great Nikki Giovanni.

Like me, Murray is there alone amongst a group of well-heeled, tan-suited poetry aficionados. My initial impression is that he is of them, but he is not them. I remember something he said to Vanity Fair a few years ago:

As the evening progresses, I think about the divide between that inside voice and ‘Bill Murray’ more and more. New Yorkers typically downplay their celebrity bonafides—it's gauche to acknowledge, let alone bother, famous people when they're out there just trying to live their lives. (As much as I'd love to pick his brain, I have no interest in bugging him tonight except in a professional capacity.) And yet, as free as he seems walking alone along the bridge, Bill Murray will never be treated like a normal celebrity, let alone a normal person. He is like a found object for the many strangers who approach and ask to take a photo with him. He never looks wholly unhappy at giving people what they want, but he also seems, well, a little cranky about it. This isn't a random bachelor party, after all.

Thank you #BillMurray for the best #selfie ever. #NYC #NBC7 You're the best! pic.twitter.com/i3UHxV5KFb

I'm not really surprised when, between the walk and dinner, I ask Briccetti about speaking to him and she advises me to try again toward the end of the night. The implication is clear: I know he's 'Bill Murray,' but he's also just a person here, give him his space.

Just me and Bill Murray hanging out 😊😭 pic.twitter.com/QZSzJguSEZ

Then again, it's hard to do that when everyone's attention is focused on him. As Platt accepts his award later in the evening, he tells a story about the first time he met Murray and notes he's been a "great friend" to Poets House. Former Poet Laureate Billy Collins is even more effusive with his praise: "He has replaced The Dude as 'The Guy,' the most popular guy," Collins said. He jokes that if Bill Murray pushed a guy off the Brooklyn Bridge, the guy would say, "Hey Bill Murray!" as he was going down.

The most striking thing Collins says before Murray comes up to read a few poems and close out the evening is that he disappears into his characters so much, "nobody knows who he is... but we know him." It was such a surprisingly tender moment of empathy, I almost missed it. Even if Murray is at a remove, he was still in a room among kindred spirits. 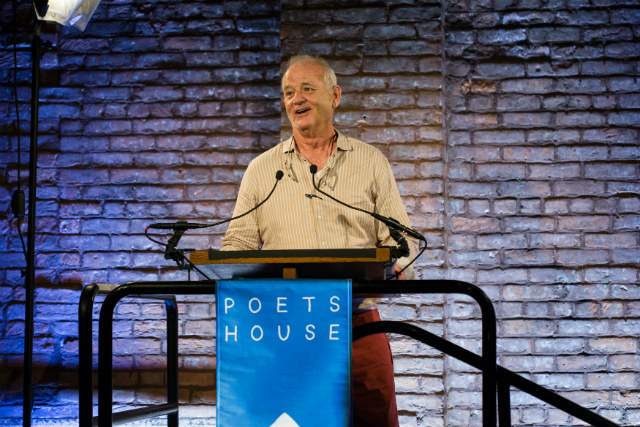 Murray closes out the event with a joke ("I put on a couple pounds to look like a published poet") and three carefully-chosen poems that reflect just how in tune he is with the event. First was "I Love You Sweatheart," in tribute to author Thomas Lux, a gregarious, long-haired poet with an unforgettable voice who died earlier this year (he was a mainstay of the walk). Then there was Rita Dove's "Fox Trot Fridays", which has a bit of that joie de vivre which Murray lives his life by: "Thank the stars there’s a day/ each week to tuck in/ the grief, lift your pearls, and/ stride brush stride."

Finally, he reads "Life Lessons" by Brooklyn-based poet Patricia Spears Jones, who I happened to be sitting next to during the dinner. She held her hand to her face and began tearing up as she heard her words filtered through his voice. It ends in the middle of a sentence; Murray let the silence pointedly hang in the air. The rewards she wrote about were so big they couldn't be approached in words.

It is not as if the struggle is useless, it is that it continues.

But joy, where is it? What does it look like, smell like—bergamot

To find it, is to explore a path where the stumbles are many

The curses frequent, but the rewards

Spears Jones turned and told me she's not usually a crier, but she was incredibly honored he chose her poem: "He did a damn good read." Murray reminds everyone to tip their server, then shuffles off stage as the event ends. I make a half-hearted attempt to talk to him one last time, but I know the moment has passed. Hands are shaken, flowers are given out to guests, cheeks are kissed.

Most people go home. 'Bill Murray' ended up heading back toward Jane's Carousel, where he apparently crashed the opening of a new waterfront restaurant, which he spotted while on the walk.

#bill murray
#brooklyn bridge
#poetry
#poetry walk
#poets house
#original
Do you know the scoop? Comment below or Send us a Tip
A new Gothamist is coming! We’ve moved comments over to our beta site. Click here to join the conversation and get a preview of our new website.