The cryptic Keano Spiritual Consultant palm card, replete with an all-seeing eye peering out from inside a pyramid, promises to help with your woes while unfurling the past, present and future. "Don't let fear - pride or doubt be your enemy," the black and white ad offers. "Reach out and let me help you I'm here for you call me now!!!"

Usually tucked into the subway car casings where Seamless, Casper et al place their advertisements, the Keano cards have such a resonant presence across New York City's subways that they seemed to have originated with the transit system altogether. These clairvoyant advertisements are embroiled in the wellness industrial complex or stoke a compelling local mystery, depending on who you ask. Either way Keano has stuck, and has inspired countless parodies from probable Alternate Reality Games to "Disco Sonic Consultant" stickers available on the counter at Brooklyn Record Exchange.

Keano has perplexed me as long as I've been living in New York. I used to live off the F train, in Brooklyn, and saw the ads on that line constantly. They're usually on the Q line, and I often see them on the C train too. I've never been interested in Keano's promise that "the moon & stars can be yours" so much as understanding how they managed to swiftly and subliminally weave themselves into the very consciousness of New York City. Keano's advertisements have become ubiquitous to commuting—which is to say it's a part of life here—yet this entity may as well not exist. Keano⁠—whoever they are⁠—have a scant online presence, with no website or physical location listed, so even if you wanted to go visit them in person, you can't. 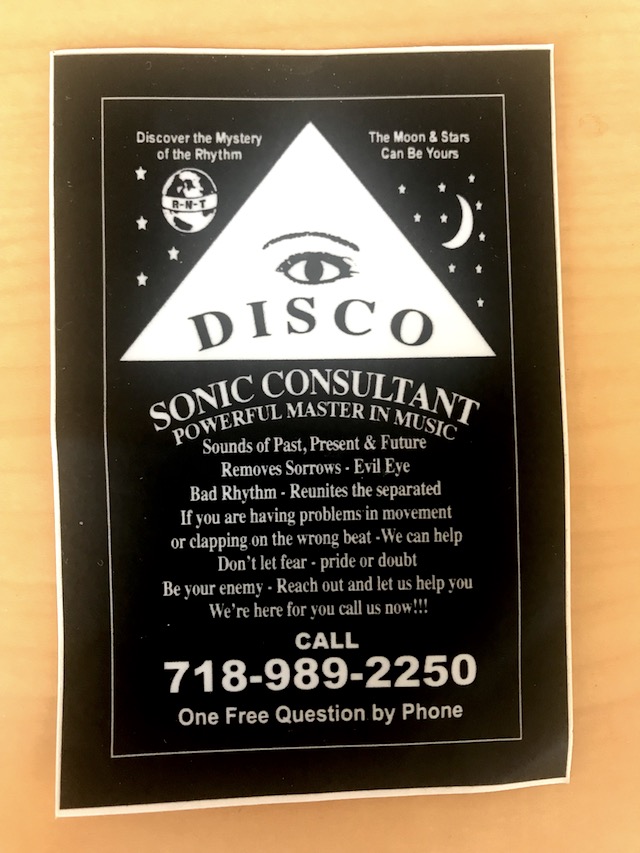 A musical parody of the Keano ads. (Paula Mejía/Gothamist)

The only lead is the number on the card itself—granting you one free question by phone—which often leads to mixed results ranging from voicemails to no answer at all. When I tried calling one of the numbers that appeared on the Keano ad as of March, 718-801-1323, I got a dial tone. Phone records for that number turned up nil. The more I combed through court records and forums, learning nothing, and called lines with no answer, the more the unblinking eye went from inquisitive to taunting. I even bought a burner phone with the intention of having several conversations with Keano on it, but the minutes on it ran out before I got very far. Suddenly I went from seeing Keano on a handful of trains to running into the ad everywhere, a dead end staring me in the face as I went from point A to point B.

The party (or parties) responsible are adept guerrilla marketers, to the point that Keano ads don't seem to be put up in trains by a person—they just appear. Online, New Yorkers have reported seeing someone papering subways with ads, and five months ago, someone posted a video of someone putting the flyers up in a train car.

A spokesman for the MTA told me that the agency doesn't collect stats on the propensity of unsanctioned advertisements like Keano's appearing on subway cars. (Advertisement on the MTA is handled by an outside agency, OUTFRONT Media, who didn't reply to a request for comment.)

Typically the MTA cleans up train cars when they reach the end of the line, quickly taking down any stray flyers and stickers before it heads back in the other direction. That means cleanup crews don't often have time to get into the glass casings, where the Keano ads live. But given that subway cars only undergo a deep clean every 72 days, I couldn't help but wonder: Are Keano ads everywhere, or do they just seem like they're permanently on the subway because they're cleared out a few times a year? The truth is probably somewhere in between.

I'd all but given up. But over the past few weeks, I started to notice something unusual: A new crop of flyers advertising the services of Angelina, not Keano, but that looked nearly identical to the iconic ads. In it, they also self-described themselves as "powerful masters in love" and offered the same tantalizing words: That a call to them potentially "removes jealousy" and "reunites the separated." But this flyer had several key differences minus the name. One, it had a dazzling purple backdrop. A possible rebranding? And this time, an address was listed underneath: 613 86th Street, located in Bay Ridge, Brooklyn. 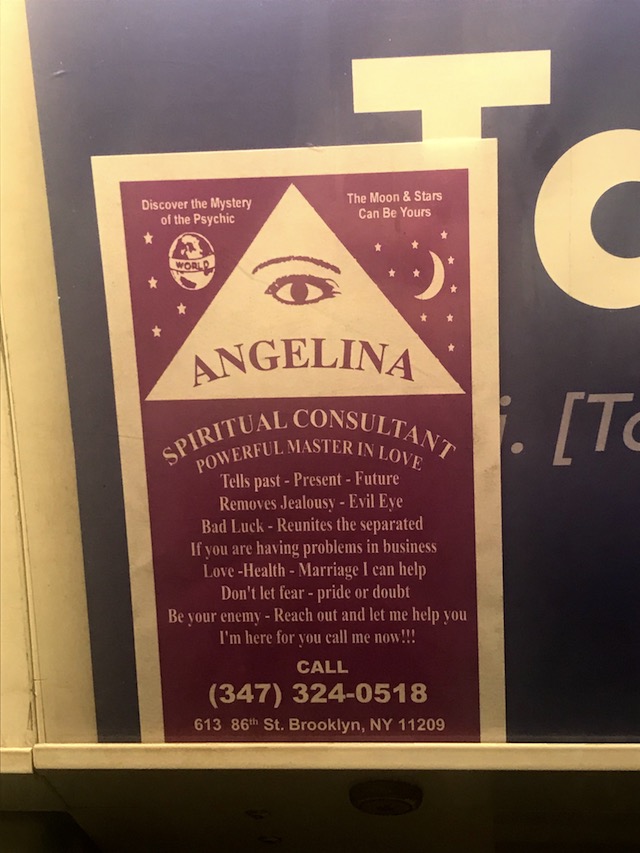 A newcomer? A rebranding? (Paula Mejía/Gothamist)

If you look up this location online, the "Psychic of Bayridge" pops up along with a website where you can book appointments. There's not much in the way of information about Angelina under the site's "about me" page, save for: "I Am A Natural Born Gifted Third Generation Psychic Spiritual Life Coach. With Over 28 Years Experience." Is this person someone from the Keano camp, a promising psychic intern who had since set out on their own? Or was this someone who was ripping off Keano's graphic design aesthetic as their own? Is this part of an ongoing flyering war throughout the New York City subway system?

For now, it seems Keano's mysteries won't be unravelled just yet. After several calls to the new number, one Angelina answered. Unfortunately, they didn't want to be a part of this story and hung up, but I'm still left wondering.

If you or your third eye know anything about Keano, drop us a line.